Last night the Pirates’ Stuart Biggs (Molonglo) lead us to the Hellenic Club in the City to show us how a pirate rocks Canberra in Lego.

But don’t take my word for it he explains all in the video.

We don’t have any more scheduled yet but it’s not too late.

(Candidates who haven’t slotted themselves in are advised that there will be no candidate challenges after 8 October [we’ve been able to extend it a bit] so they better get in quick and should email john@the-riotact.com )

Pictured is Stuart’s idea of community consultation while point to point cameras are removed: 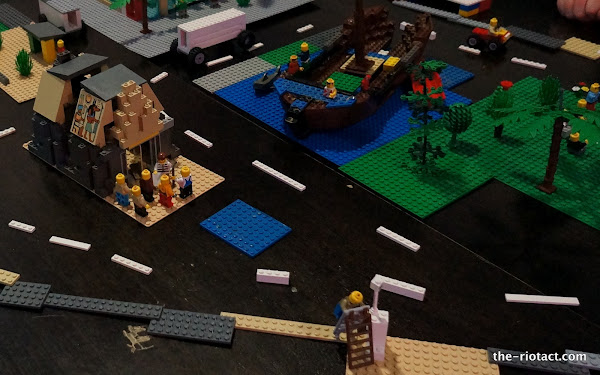 One house on Ellerston Avenue in Isabella Plains has an electric fence out front. Less than 400m from the school.

If the school is MacKillop I would be putting a front fence up too.

One house on Ellerston Avenue in Isabella Plains has an electric fence out front. Less than 400m from the school.

a) Oh, that’s what it was all for…I did wonder about the dragons, but I thought they had them somewhere out in Tuggeranong.
b) I’d quite like a front fence too so my dogs could ruin the front yard as well. And a 1950s house demands one, I tell you. Otherwise you’re a filthy communist.

The front fences were a giggle; they’re not allowed in Canberra under the planning laws.

I’d like to thank the RiotACT for the opportunity to share my Lego vision for Canberra, John for his hard work in putting the video together, my assistants, and the Hellenic club for providing the space.

It was great fun, and I’d urge any candidates that haven’t booked a date to give it a go!

JC - 1 hour ago
China may well be a developing country with many that are very poor. It does however have a massive (millions) middle to uppe... View
keek - 4 hours ago
Nobody held a gun to the Chancellors head and said "You must rely on income from foreign students and expand to a level where... View
chewy14 - 6 hours ago
JS9, Whilst I would agree that the Federal government has set the framework and playing field that the Unis are operating in,... View
News 20

Richard Windsor - 3 hours ago
As the poor bunny who has been identifying mushrooms, both toxic and non-toxic for the ACT Hospital system since 1985 I must... View
Community 12

Capital Retro - 7 hours ago
".... An emblem showcasing medieval queens, crowns, and castles, doesn’t represent 21st century Canberra..." We have all th... View
Stephen Saunders - 13 hours ago
Symbols do matter. The British monarch is the white hereditary chief of the Church of England. An emblem showcasing medieval... View
HiddenDragon - 23 hours ago
"Could the Brindabella Ranges be incorporated into the ACT’s coat of arms,..." An image which combined the mountains and th... View
News 1

jwinston - 10 hours ago
How many committees and inquiries does there have to be before anything constructive is done at the AMC? From what has been p... View
News 71

Capital Retro - 24 hours ago
I've already pointed out the folly of people building in the forests which are known bushfire areas. It seems some academics... View
Community 1

The CFMEU has been accused of attempting to control the price charged by Canberra steelfixers and scaffolders, allegedly telling businesses if...
Property 4

@The_RiotACT @The_RiotACT
Elizabeth Kikkert has accused Corrections Minister Mick Gentleman of incompetence, and said the appointment of Christine Nixon to head the Oversight Committee at $2000-a-day was just adding another layer of bureaucracy to avoid responsibility for AMC https://t.co/a8RCOtNNt0 (44 minutes ago)

@The_RiotACT @The_RiotACT
BREAKING: Wajid Kakar, a 35-year-old Afghan national, has been charged with murder over the death of 34-year-old Michael Williams, as well as the attempted murder of two other people in Page on Saturday https://t.co/LClTY2bZoj (2 hours ago)