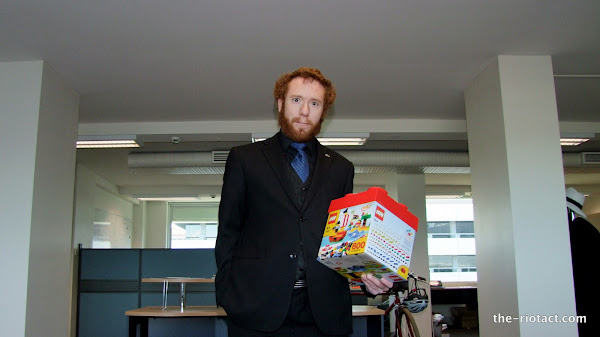 The Lego Challenge is coming to the end of phase 1 (Lego acquisition) with the Pirate Party getting in thanks to Stuart Biggs.

Stuart brought a another big box of basic blocks.

So far the donating tally is Two Liberal, Four Labor, Two members of the public (Thank you Ayrton and Penelope), One Green and Two Pirate (Boo Bullet Train!).

We also note that there’s been enough lego donated to allow for a (non-candidate) assistant to be recruited for maximal lego-ness.

Are you referring to his penis? If so, then no.

If the Lego is looking for a home afterward, I know a school that would love a contribution to their stop motion animation classes… And could make some vids for RiotACT in return… 😉

Give that man an eye patch and a parrot and I’d be calling im Red beard.
Arrrrrrr

I heard he has a wooden leg. And a hook for a hand, which is going to make it a real bitch when he has to build his Lego project. Just rumours though.

Is that a pirate ship on the side of that box of Lego?

Now that’s a man with a beard I can trust.

That be Cap’n Ranga. He discovered America afore the Spanish, he did.

Give that man an eye patch and a parrot and I’d be calling im Red beard.
Arrrrrrr

Ol L - 7 hours ago
Scary figures for these retrospective energy improvements. All homes September 2019- ‘The cost of the retrofits ranged betw... View
jorie1 - 7 hours ago
Well said @Acton. The price of the property dictates what you get. If you want to rent a 6 star energy efficient modern updat... View
jorie1 - 8 hours ago
I agree that a world view of housing should be to provide shelter first, and most houses in Australia do provide shelter. But... View
Opinion 12