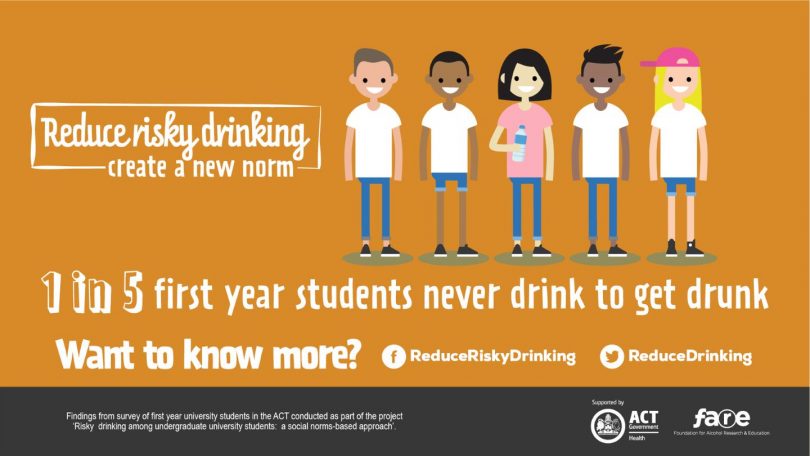 Canberra university students are drinking less than they were three years ago, but attitudes towards binge drinking haven’t changed according to a new report released yesterday (30 October).

However, while there’s been a drop in risky drinking behaviour, the study discovered that there has been no change in attitudes towards binge drinking, with one-in-three respondents still believing that it’s OK to drink to get drunk.

The Foundation for Alcohol Research and Education (FARE) started the Reduce Risky Drinking Campaign in 2017 across the Australian National University (ANU) and the University of Canberra (UC) to curb binge drinking on campuses.

The report details a significant decrease in high-level drinking, with the consumption of 10 or more standard drinks in a typical drinking occasion falling from 16 per cent in 2017 to only 2.6 per cent.

However, the overall frequency of drinking alcohol did not change significantly from 2017 to 2019. Students who admitted to drinking two to three times a week increased by 50 per cent, while those who say they drank two to four times a month decreased from 49 per cent to 44 per cent.

Binge drinking rates only fell from 79.5 per cent to 73 per cent, a drop which the report admits is not statistically significant, but 63 per cent of students now drink four or fewer drinks per session, up from 39 per cent previously. More than four drinks a session puts an individual at risk of short-term harm.

The report gathered a total of 139 valid responses after providing information on risky drinking to more than 6,500 students over a three-year period.

Despite the small sample size, FARE Chief Executive Michael Thorn has told Region Media that the report is statistically relevant.

“There were many measures taken in the survey – and only some significant changes were seen. The sample is small but representative, and sufficient to apply statistical analysis and inference,” he says.

“The project has achieved a number of positive changes to the attitudes and behaviour of the ACT’s students, including a corresponding significant reduction in binge drinking,” he says.

One-in-four students claim to never drink to get drunk, rates which are similar to 2017 levels.

The report also found that students underestimate the level of non-drinkers and overestimate how many of their peers binge drink, as the campaign focuses on trying to break the perception that all undergraduate students constantly drink to get drunk.

“Fewer students now believe that students around them are drinking to get drunk once a week or more – a drop from 59.6 per cent to 41.4 per cent,” Mr Thorn said. 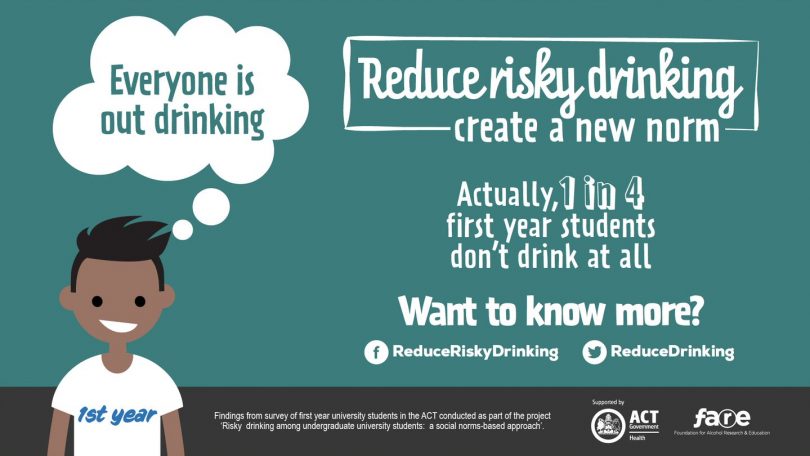 Universities are trying to break the perception that all students binge drink.

Only 1 per cent of students drink daily.

FARE says that the major takeaway from this report is the health aspect of binge drinking, with a significant drop in claimed negative consequences experienced after a night out.

The amount of people missing work or school the next day was cut in half, as was the number of people who passed out from alcohol, and the rates of students who needed to see a doctor or healthcare professional was reduced to zero.

“More than 65 per cent of the targeted students at ANU and UC are now more aware of drinking levels and the associated risks of short- and long-term harm,” Mr Thorn said.