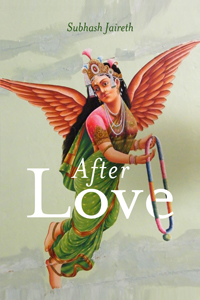 Please join us for the launch of After Love by Subhash Jaireth.

The book will be launched by Paul Hetherington.

A haunting novel of love, betrayal and redemption, set in India, Russia and Italy.

Vasu, a young Indian student of architecture, arrives in Moscow in the late 1960s. He falls in love with Anna, an archaeologist and an accomplished cellist, yet his romanticism about the Soviet Union clashes with her experience. He goes back to India to design a village for a co-operative of coffee farmers, but he cannot forget Anna and on his return they marry. Anna wants to leave Moscow but isn’t keen to go to India. They decide to go to Venice where Vasu has been offered a teaching position. In Italy their life unravels when Anna mysteriously disappears without a trace. Years later, Vasu discovers a painful but wonderful truth.

A beautifully written story full of music and emotions that moves with ease across continents, After Love is destined to touch the hearts of readers everywhere.

After Love is published by Transit Lounge.

‘ultimately about the mystery of creation itself, the silence from which all things come.’ John Hughes

‘a lucid and pungent distillation of desire, longing and loss.’ Judith Beveridge

Subhash Jaireth was born in a small town in Punjab, Northern India. Between 1969 and 1978 he spent nine years in Moscow studying geology. He has published poems in Hindi, Russian and English. His book To Silence: Three Autobiographies was published by Puncher & Wattmann in March 2011 and has recently been performed as theatre piece. He lives in Canberra.

Nicole Kopplemann - 4 hours ago
These guys catered an event I was at today. Fantastic food. View
Opinion 3

Lee McDowall - 7 hours ago
Nurses should be paid so much more. Garbos think they have a tough job, swap for a day then ask for 12% over 3 years. Nurses... View
Roberta Lynne Anning - 8 hours ago
Give them the same pay that the garbos get, and give the garbos the same pay that the nurses get. They just might shut the he... View
Rodney Thompson - 18 hours ago
Someone who actually deserves a payrise. View
Community 22

Clare Jones - 15 hours ago
Why say these are open when the two we've been to still have temporary fencing and one even still had a tractor inside the fe... View
Business 5

Ashley Wright - 18 hours ago
Chris Olsen actually Clinton was right. William Hovell drive had the limit lowered between Coulter Dr and Bindubi street beca... View
Tolga Altinbas - 21 hours ago
Because one is a roadwork sign. And the other one is always there on the pole View
Wang Chow - 22 hours ago
My guess is that they changed the speed limit in Chisholm/Richardson because its cheaper than putting in more speedbumps that... View
News 21

@The_RiotACT @The_RiotACT
A slice of Canberra's history will be on display in Civic tomorrow. Here's what makes it so unique ... https://t.co/lVtEtheBJK (4 hours ago)

@The_RiotACT @The_RiotACT
Hot in the City: Herbert’s at Evatt is quickly becoming a beloved new local https://t.co/ArFVZO3LZN (5 hours ago)

@The_RiotACT @The_RiotACT
Buyers are flooding the Canberra housing market, pushing prices to record highs. Find out why and what's hot https://t.co/PqxXutRy0V (7 hours ago)