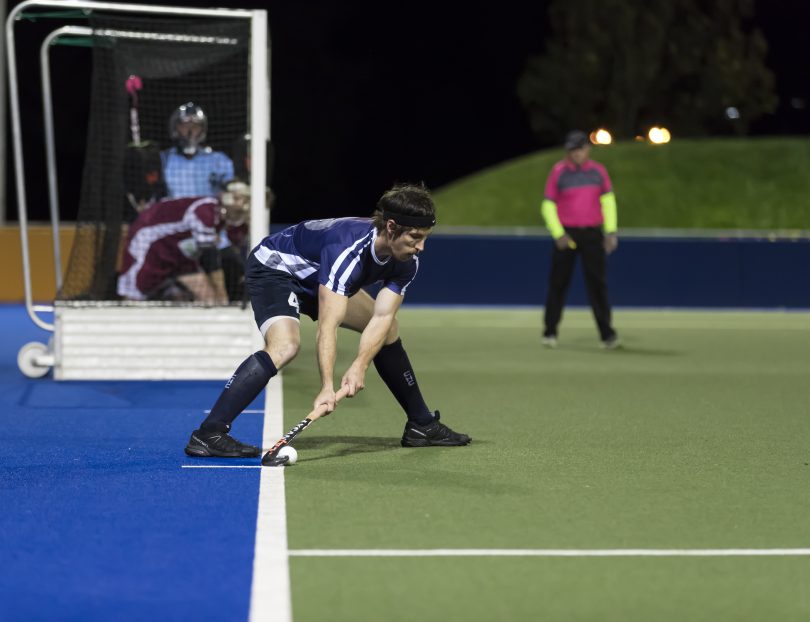 Reaching milestones in any career is a great accomplishment and reflects the long hours of hard work put in to achieve something special.

This is especially true for athletes who dedicate not only their time but also their lives to the game they love, so reaching their goals and achieving greatness becomes something even more amazing.

For long-time ACT hockey player, Daniel Hotchkis, the sacrifices made are totally worth it in the end not only in achieving his personal goals but also being recognized for them.

The former Canberra Lakers player was recently acknowledged for playing his 250th game for Central Hockey Club where Hotchkis was honoured as a loyal member and player.

“It feels pretty special. Not only to reach such a milestone personally given my injury history but to have done it with one club makes it even better.”

Hotchkis has been part of the ACT hockey community since the age of five, when he originally started playing Minkey Hockey at Southwell Park.

But hockey was not necessarily his sport of choice back then as Hotchkis didn’t get serious about the game till later in his teens.

“I played a few different sports when I was younger and it wasn’t until Under 13’s when I made representative sides in hockey that it started to become serious.”

And serious it did become as Hotchkis was drafted not only to play with the Canberra Lakers for 12 consecutive seasons, but also to represent Australia internationally on multiple occasions.

Hockey became a lifestyle that Hotchkis thoroughly enjoyed and kept coming back to.

“My favorite thing about hockey is the family-oriented culture and it is what gets me coming back. The fact that hockey has a competitive nature and requires a diverse skillset making it such a unique sport just tops it off.”

The achievements continued to flood through for Hotchkis who won the prestigious Brophy Medal for Best and Fairest for three consecutive years in 2009, 2010, and 2011.

Hotchkis says that while winning the Brophy medal is a ‘nice achievement’, it doesn’t come simply by being ‘an individual’ but by working as part of a team.

“I try to be a leader on the field mostly with my actions by playing my role as best I can. If I am able to do that then I have done my part for the team to be successful on that day which is always the priority in a team sport.”

Humble and appreciative, Hotchkis acknowledges that it is this ‘team spirit’ that has made him stick with Central for 250 games.

“The best thing about playing for a Club like Central is again the family culture that comes with it. It helps when everyone is comfortable in the team environment coming together to strive for a common goal.”

Having represented Australia internationally, played 113 games with the Canberra Lakers, and winning the Brophy medal three years in a row is as successful as one can get in hockey.

But every high is accompanied by a low, something that all hockey players are well aware of.

For Hotchkis, competing in representative hockey meant he was prone to injury, forcing him to miss most of the 2017 Capital League 1 season.

In that time, Hotchkis focused on the other things he is passionate about in life which has included keeping up with a number of different sports and volunteering at a local dog rescue.

“I love health and sports in general so in my spare time I like to try my hand at a number of different sports either on the courts or at the oval. I like to keep up to date with a number of sporting competitions around the world ranging from the NRL to the NBA.

“I also volunteer in my spare time for the Hear No Evil- Deaf Dog Rescue organization to assist with the dogs while they are waiting for a potential foster home.”

Coming back stronger than ever this year, Hotchkis has already assisted Central in getting back to the top in the Capital League 1 competition.

Hotchkis is optimistic that Central will push it all the way to the end with high chances of taking out the 2018 Premiership.

“We got a few good pickups in terms of players this year and we are really buying in to the game plan which so far has proven successful for us. It is a long season though and any team can turn up on their day so it will need to be a consistent effort to get through to September.”

Already a high achiever and loyal ACT hockey family member, Hotchkis looks forward to the future but is not too concerned with what it has in store for him.

“It feels as though it has been a long career and at some point things must come to an end, but for the moment I will look at getting through this season with Central, see how the body pulls up and then reassess my goals at the end of the year to determine what I might do next.”

Lyn Scougall - 2 minutes ago
Margo Bellis you told us that, that’s why we went there 👍 View
Margo Bellis - 23 minutes ago
Lyn....it was far better than Floriade View
Ali McNally - 2 hours ago
Nadine Pickersgill next year! View
Community 7

Grahame Barnett - 11 minutes ago
We "bribe" our magpie gang. We feed them. They don't attack their feeders. View
Karen De Britt - 12 minutes ago
Feed her mealworms, she'll come around 😁 View
News 33

Tramcar Trev - 18 minutes ago
$162million for about 1km of light rail does seem excessive. why do they insist on laying the track inn concrete where the tr... View
Sally Greenaway - 19 minutes ago
Steve Manns but that can't be right. It's too expensive even for our rates... View
Steve Manns - 57 minutes ago
Sally Greenaway no. None. Not a cent comes from private investors. No ones going to invest in that. If you want to know where... View
News 28

whatwik - 23 minutes ago
Ha, try NSW regional travel. Disappointing yes, but prudent. Some of us do wonder about the obsession with the ACT Chief Mini... View
chewy14 - 2 hours ago
JC, No spin here, just facts. Whatwik claims that others have had to backtrack on their plans. Except none of the other state... View
News 8

Clive John Trenton - 36 minutes ago
Come on people. It was replaced for a very good reason! As an old bridge it was likely costing a fortune to maintain due to i... View
Mitch Carrington - 1 hour ago
Was fun riding over this for some reason Mark Humphrey Wheeler View
Greg Grant - 1 hour ago
About time! View
Community 25

Capital Retro - 39 minutes ago
The Australia Post vans deliver mail to them early in the day so that the postie bike person can use them as a suburban pick... View
News 244

Nanna Lola Apted - 42 minutes ago
Who will look after them and keep them tidy. Who will prune them back when they overhang the roads and block drivers vision. View
Geoff Jones - 1 hour ago
Money could be spent maintaining public spaces and mowing. View
Opinion 31

rspg - 49 minutes ago
Bureaucracy at its worst with no concept of real world realities. When Manuka oval and st Christopher’s can’t be accessed... View
News 25