Supa Productions bringing The War of The Worlds [Ticket giveaway!] 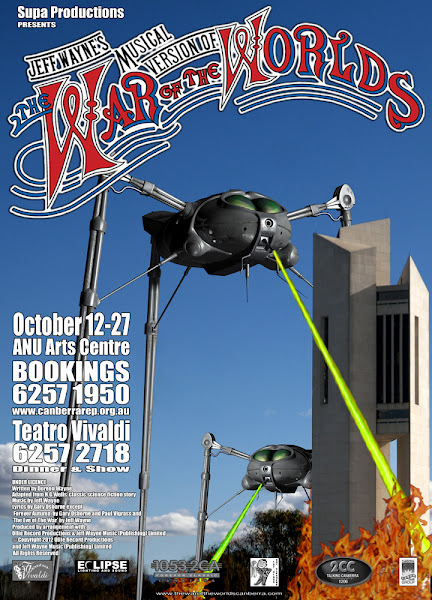 This in from Supa:

Jeff Wayne’s Musical Version of The War of the Worlds is a 1978 concept album by Jeff Wayne, retelling the story of the H. G. Wells classic novel of the same name.

The two-disc album remains a bestseller having sold millions of records around the world and is the 10th best-selling album of all time in Australia with sales of over 700,000 units and achieving 10 times Platinum status.

The album was derived from the seminal science fiction novel published by H.G. Wells in 1898. Infamously, Orson Welles radio broadcast of 1938 based on the same story sparked mass panic in the US over the apparent Martian invasion of New Jersey.

This heavily-stylised, progressive rock stage show delivers a live performance of the enormously cult-popular record. The show is performed by a large on stage orchestra and rock band with live vocalists all supported by spectacular multimedia.

The War of the Worlds is narrated by a journalist who lived through a late 1890’s imagined invasion of earth by the inhabitants of Mars, and includes all the much loved songs such as Thunderchild, Spirit of Man, Brave New World and the world-wide multi-million selling single for Justin Hayward, Forever Autumn.

The show will be presented with a 27-piece on-stage rock band and orchestra and a six meter wide screen with high definition multimedia from the original UK touring show.

Supa Productions promises to deliver the biggest musical theatre spectacular on stage in Canberra for many years.

You can see more information about the show and its history at:
http://www.thewaroftheworlds.com
http://www.war-ofthe-worlds.co.uk/music_mars.htm

The show’s going on at the ANU Arts centre.

We’ve got a double pass to give away to the first RiotACT paid subscriber to send me a message through the contact form. Available dates are:

And here’s a taste to get you started.

link when you find it…that would be awesome.

This is really worth seeing; we had a great time. The animated Martians were satisfyingly Cthulhu-like, though Cthulhu came later than the Martians HG Wells invented. The music still sounds good. (“Forever Autumn” is not a favourite of mine, but that’s just a personal bias against mournful love songs.) Make sure you stay until after the cast and musicians (who were terrific) take their bows, as there is a fun ending. I am going to embrace my inner geek and try to find and download a repeating noise from the album as my next ringtone.

A real mix in the audience too; lots of kids as it was a matinee, and older people talking about their original vinyl recordings. (“This is where I turn the record over”, someone said at the beginning of interval.)

To age myself immensely, I can remember listening to bits of this on a transistor radio, hidden in my bed back around 1898.

A truly impressive achievement for 1898. Sure you weren’t one of the Martian invaders yourself? We backward Earthlings didn’t have radio for another decade or so and transistors were 50 odd years away..

For a truly brilliant experimental alternative there is this from Alchemist!

Gave the album a spin in the car today and the moment Brave New World kicked off all I could think of was the artillery man was Matt Watts speaking on behalf of the liberal party. Quite funny really.

CD 2 Track 4 if you have the album on CD

I like the lines we’ll teach the kids everything they need to know ‘not poems and rubbish, but science’. Didn’t quite see Matt Watts in there, though! To age myself immensely, I can remember listening to bits of this on a transistor radio, hidden in my bed back around 1898. Now wonder the advanced Martians appealled to me.

I’m looking forward to seeing this. Thanks RiotACT.

Gave the album a spin in the car today and the moment Brave New World kicked off all I could think of was the artillery man was Matt Watts speaking on behalf of the liberal party. Quite funny really.

CD 2 Track 4 if you have the album on CD

This is a cool musical. Aliens, synthesisers, red weed… A fun time for everyone

So, who was quickest?
Fun poster! (I mean the event poster, not hilarious little moi.)

Can’t wait – it will be out of this world!

Warwick Alsop - 7 minutes ago
Have you ever been to Braddon? They only pulled the plastic off the last rebuild a couple of years ago.... View
Tom Adam - 11 hours ago
Natalie the Woden area around the bus depot. (Where they had to due to land sale agreements). Not the Phillip business Centre... View
Natalie Roseworn - 11 hours ago
Tom Adam they announced some major refurbishments for Woden/Phillip not long ago. View
News 26

Alex Elliott - 42 minutes ago
Build the carpark underground and put the park back on top. Everyone wins. ;)... View
Property 40

Rob Tomsen - 11 hours ago
Let’s just stop summer 😂😂😂😂😂 View
Ray Ez - 11 hours ago
Awesome! So Wuhan flu is irrelevant and climate change is the devil! Keep up the laughs! View
Carole Ford - 12 hours ago
There are probably millions of deaths a year that can be attributed to air/water pollution, this pollution is cumulative and... View
Property 20

Sue McIntosh - 14 hours ago
Angela Moore thank you for this beautiful poem. View
Angela Moore - 15 hours ago
"The Poplars" The Poplars are fell'd, farewell to the shade And the whispering sound of the cool colonnade. The winds play no... View
Sue McIntosh - 19 hours ago
Ho hum, what else is new? More trees given the chop. If council is so worried about the trees falling, then they should be re... View
News 10

John Hutch - 14 hours ago
I thought that these protests were a disgraceful display of the left-wing mentality and agenda to maintain oppression and vic... View
Capital Retro - 15 hours ago
"marginalisation by choice" being the PC term for "victim industry"? View
Spiral - 18 hours ago
Does anyone have accurate recent stats on how bad the problem really is: This article: https://www.news.com.au/national/black... View
News 36

Swimmers will again be able to take the plunge at two government-owned pools this month under the Phase 2 easing...
Property 5

Stamp duty for eventual owner-occupiers will be reduced to zero for new land single residential blocks and for off-the-plan apartments...
*Results are based on activity within last 7 days

This pandemic has seen individuals and organisations reorganise day-to-day activities in a different way. Some have risen to the challenge...
News 42

The ACT is splashing $13.9 million in Canberra's inner north to upgrade lighting, accessibility and parking along streets in Braddon...
Property 40

The ACT Government's plans for a small car park opposite Cooleman Court in Weston that will cost more than $600,000...
Best of Canberra 63

Building a new home, or renovating or extending your existing home, is one of the biggest investments you’ll ever make,...
Motoring 23

@The_RiotACT @The_RiotACT
St Benedict’s in Queanbeyan has been helping locals for more than 15 years, offering meals, friendship, advocacy & support to those who need it most https://t.co/l22RO7R84o (2 hours ago)

@The_RiotACT @The_RiotACT
Heat-related deaths are at least 50 times more common than recorded on death certificates, according to two ANU researchers who are pressing for 'climate change' to be acknowledged as a cause of death https://t.co/G1W35CdPg1 (12 hours ago)

@The_RiotACT @The_RiotACT
While most of us were working from home, our health professionals were on the front line of COVID-19. But like many (male) Canberrans, they let themselves grow and COVID became MOVID. Check out their efforts https://t.co/KVLsKnJCTk (13 hours ago)