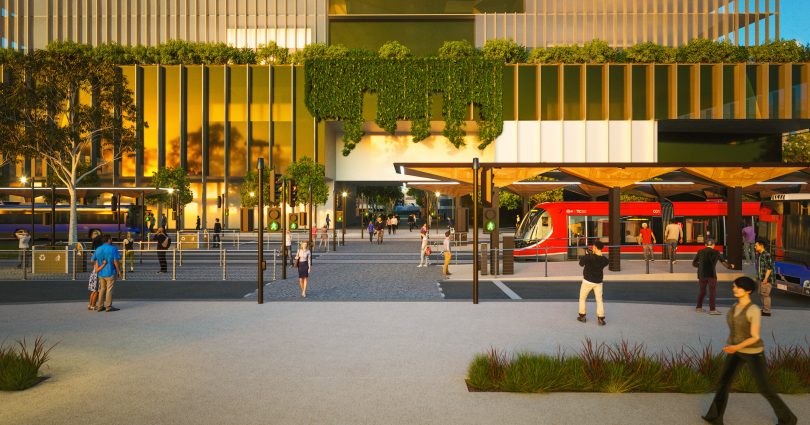 New details about the Woden CIT precinct and public transport interchange project have been released, as the ACT Government opens consultation on the site’s open spaces.

The government says the new CIT Campus will be home to around 6500 students, and about 10,000 commuters are expected to move through the new public transport interchange each day.

The project includes a new pedestrian boulevard that will connect the Callam Street interchange to the campus and a new shared zone linking Bowes and Bradley Streets, with links to the Woden Town Square and mall.

An indicative layout of the precinct has been released showing new green spaces and the proposed pedestrian boulevard.

Based on the feedback to date, three secure public bike enclosures and public toilets are being planned in addition to the facilities provided within the new CIT building for students and staff.

One of the bike enclosures and public toilets is proposed for the new park between Grand Central Towers, CIT Woden and the new Woden Transport Interchange. 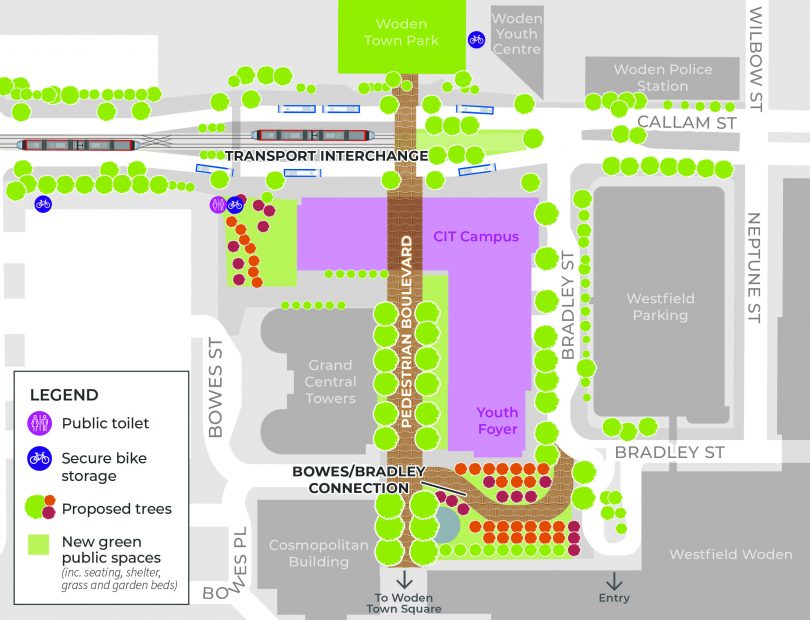 The consultation report on the proposed new local access shared zone has also been released, and feedback shows a desire for shade trees, seating and meeting places, drop off and pick up points, and a preference for garden beds over grassed areas.

Transport and City Services Minister Chris Steel said the government wanted to hear from the community about their preferences in the precinct and the boulevard so this could be fed directly into the next stage of design work, following the appointment of a construction partner in early 2022.

“Our aim is to deliver a modern, vibrant and well-connected space, so we want to hear from locals about how you will use and access this new precinct,” Mr Steel said.

“We are consulting on features like active travel, wayfinding, safety and what you want to see included in a revitalised Woden Town Centre.” 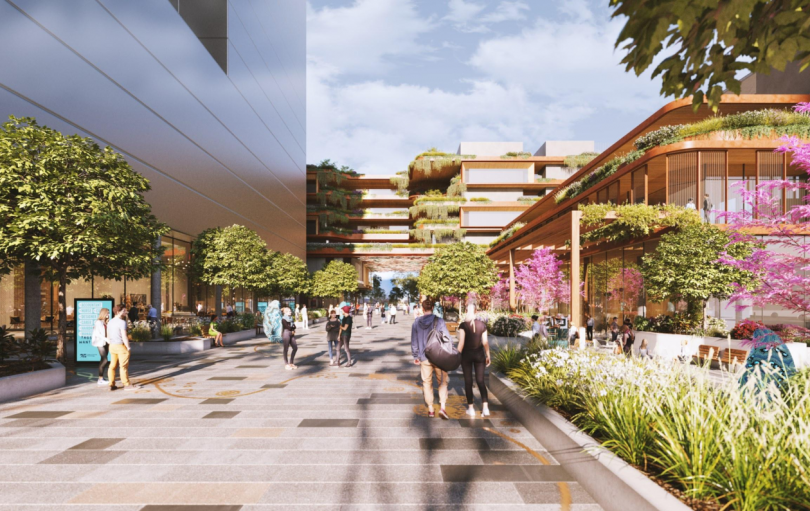 Mr Steel said the new pedestrian axis delivered a crucial part of the Woden Town Centre Master Plan and would be built in place of the current road in the old interchange.

“This is an important new pedestrian connection in Woden and we want the community’s ideas on what elements would make it a welcoming place to dwell as well as pass through,” he said.

The shared zone will prioritise pedestrians, have a speed limit of 10 km/h for vehicles and include safe cycle routes.

“We heard that shade, shelter, seating, active travel, landscaping and a communal atmosphere matter most in this pedestrian-focused area,” Mr Steel said. 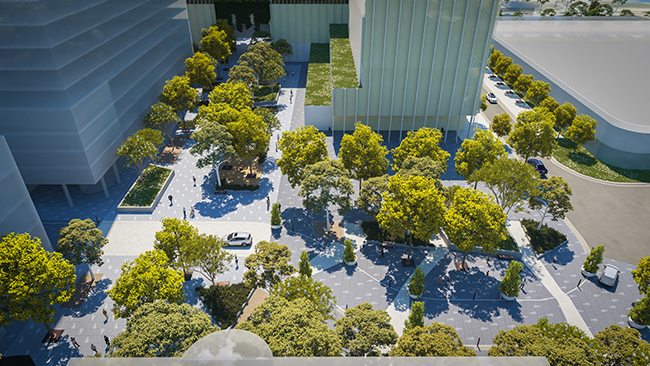 Key early works are already underway, with road improvements and new bus layovers and facilities on track for completion in 2022. Construction on the new interchange will commence in the coming months.

“We’ve got a busy period of construction ahead of us as we work to rejuvenate this part of the Woden Town Centre. I’d like to thank the Woden community and businesses in advance for their engagement with shaping this project, and their patience as we get on with delivering it,” Mr Steel said.

A development application to demolish the current interchange is expected in August 2022, with a DA for the CIT mid to late 2022.

The Callam Street interchange is expected to be up and running by late 2022.

To contribute to the consultation, visit the YourSay website.

Fresh look? – this is still the same traffic shambles in the making, and will remain that way long after construction of the interchange, CIT and Hellenic Club redevelopment are completed.

Closure of Callam St is nuts. It’s the main feeder from Athlon Drive through to Launceston St.
Remember when Callum St was realigned to meet Athlon Drive? The tram should go into the old interchange area. Mobility compromised people heading to Woden offices or to shop at the mall will be faced with a longer access route after alighting and again when going to catch the tram. Not enough thought has been put into this. Yet another nutty amateurish ACT government brain short circuit.

Do Canberra’s trams have the same cracks that have closed down the Newcastle trams and the ones in Sydney?

I still recall the last time I used public transport to regularly get across town. That was in the 1970s. I was young and had infinite tolerance, and time to waste. There was no internet nor mobile phone. Imagination and diesel fumes only went so far wiling away the time sitting on a cold metal bench or pacing the cold concrete pavement at Woden Interchange.

To get from Downer to Farrar took three separate buses and two changes, with trip times of at least two to three hours. The same coming back the other way.

At least there were the express busses between woden and civic straight down Adelaide and Commonwealth avenues, with no stops they took 15 minutes. Of course, there would often be long wait times at the interchanges.

One Sunday afternoon, realising it would be faster to walk from civic to Downer than to wait for the connecting bus, I passed an elderly American couple patiently sitting at an open bus stop half way up Northbourne Ave. It was clear they’d been there some time when they asked if I knew when the next bus would be along. I knew roughly how long I’d been walking already and have never been able to unsee their pain when I gave them the bad news.

That’s when my tolerance and patronage of the system ended, resolved to get myself a car ASAP, and vowed never to rely on public transport again, at least until it could meet my criteria for a return. Those being: a system that’s reliable, regular, diffuse and frequent enough not to need timetables; 24/7.

Bring on the driverless electric vehicles.

I don’t understand what’s wrong with the current layout that was designed to separate vehicles and pedestrians, so pedestrians never have to cross the roads within the interchange. Why rip it out and replace it with a layout that mixes vehicles and pedestrians by forcing people to cross roads, often while hurrying to make their connecting bus? …it’s almost as if they want people to get run over (interestingly, it’s the exact opposite approach to what private companies do to keep pedestrians safe).
It’s just repeating the mistakes of the Belconnen interchange – it’s now so spread out and disjointed and forces people to cross roads, sometimes a number of roads, some of which don’t even really look like roads – it looks like passengers wanting to get on a bus were an afterthought.

“Canberra might have to take on streetscape activities such as food vans and active set up and pack up stall like real cities in between the interchange and shops.”

Mr. Barr won’t be happy to hear that “the coolest little capital” in the world isn’t a real city.

Westfield woden should knock down that mall and make a 5 or 6 level and more parking. Some parts of that place is wasted not getting full use of it

Chris Bico That seems a waste. I imagine in most of its catchment area, there is a bus available. I use a bus to get to the mall. The few times I have driven, I have never found all the present available parking full.

Julie Macklin so you saying u don’t want people to have jobs. I’m sick of bums almost at every shopping centre wanting money because they don’t care. And buses can have a spot at the mall where it is easier for everybody to get in and out. As a state of outdated malls. I’m sorry but as the population is increasing people need jobs

Chris Bico No strawman argument please. I never mentioned jobs.
Maybe you can make an argument why the mall needs knocking down and rebuilding, when it’s hardly ever crowded, and there is plenty of parking for most times now. Plus it has a bus service. Rebuilding something that doesn’t need it, is a waste of resources. Surely you don’t advicate knocking down the building only to put all those people working in the mall out of a job, while this happens.

Glad to see the Labour/Greens government is not wasting money building anymore public toilets.
Have you been to Braddon recently? Try and spot a public toilet – there is none.

Maddy Bartlett right at your doorstep!

That is one big public toilet in that diagram

Sue Sutton you found it !

As a massive CIT advocate, please make sure you have your say on making great CIT facilities.

Electric buses would be far more economical and faster. 🙈

That would make far too much sense though…

The bus layover for drivers is a 500 metre walk to the shops, over near the football ovals. Too bad if you only have limited time to get your lunch on the run…🙄

Canberra might have to take on streetscape activities such as food vans and active set up and pack up stall like real cities in between the interchange and shops. Might encourage people to actually use all that walking space that has nothing around it. Very pretty in the renders but I’m placing bets it’s going to be very empty

Does anyone know how buses that terminate at Woden will turn around?