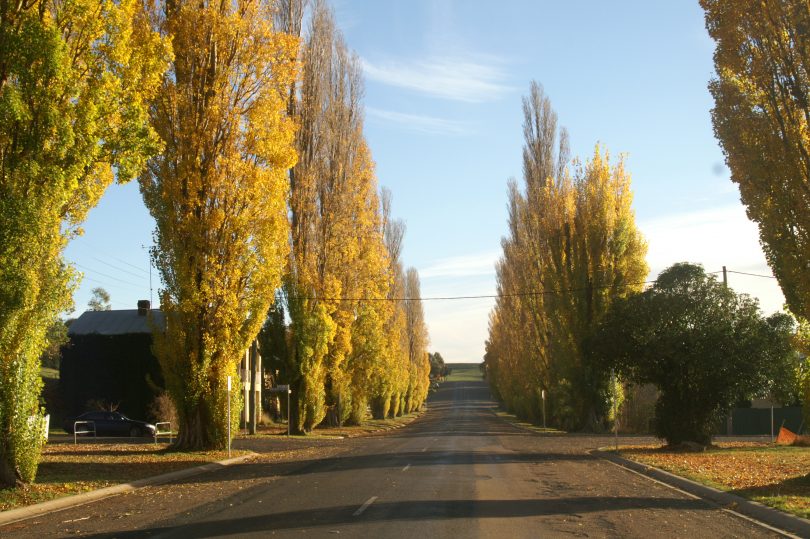 When an icy breeze sweeps the last of autumn’s yellow leaves through Taralga north of Goulburn, art works and steaming cuisine bring more than 1000 people into the village for the June long weekend.

Former Goulburn Regional Art Gallery director Jennifer Lamb sighed wistfully to herself 19 years ago, when the art show opened for its first exhibition and judging. “I used to get so jealous, I would never get audiences like that. At the opening on Saturday you always get up to 200, more likely 300 people,” Jennifer says. “People come in out of the freezing cold, the hall is well heated, and there are enough people to warm it up. Afterwards they head off to the two pubs, some of the cafes stay open and serve dinner.”

Taralga’s 1870 Argyle Inn’s only 5 pm sitting for dinner, is on opening night, for young families and owners of bush blocks visiting from Sydney. One of the inn’s partners, providore and poultry farmer Hugh Wennerbom, says the early sitting enables diners to attend the opening at 6 pm. “The art show is always a big weekend,” Hugh says.

Joining the Sydney blockies will be Southern Highlands, Canberra and Goulburn and district people following their favourite local artists.

Recognising the powerhouse dynamics of a little community, Jennifer estimated in 2001 a lifespan of 10 years for the art show. Nineteen years on the show is stronger than ever, and as one of the volunteers for organisers, the Taralga Progress Association, the playwright is thrilled. 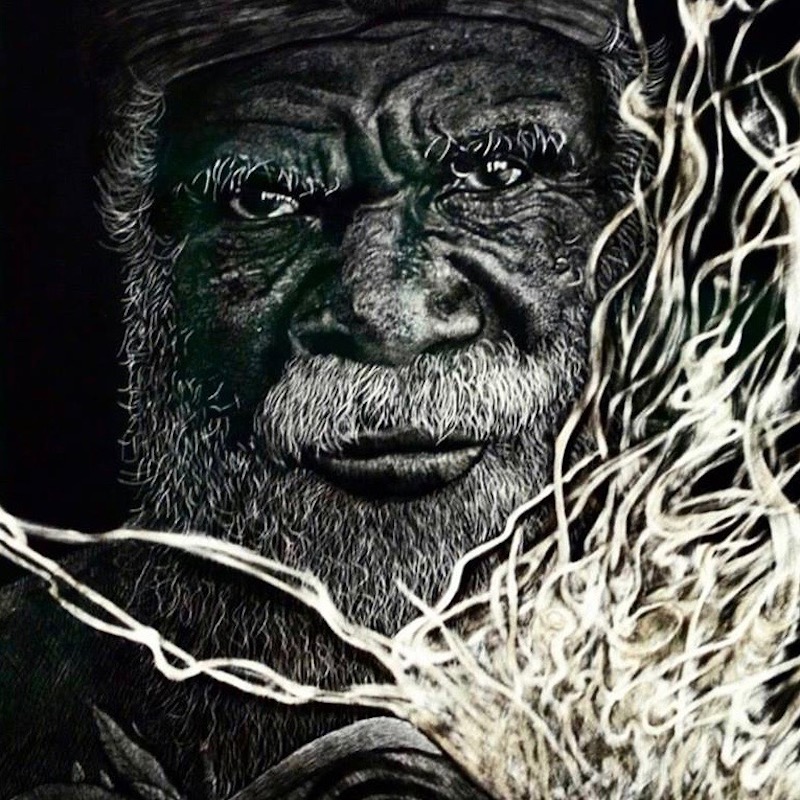 “Welcome to Country” by Michelle Peddle.

“It is amazing the people who have links to Taralga through distant family,” Jennifer says. “Sydney broadcaster Richard Glover, a district resident, opened the show one year. The late Barry O’Keefe, a barrister and brother of wild rocker Johnny, came from there. Col Joy apparently speaks fondly of Taralga, I can’t remember his links with Taralga or whether he performed there as a big pop star.”

Paintings hang on hessian screens borrowed from Trinity Catholic College, Canberra, in the Taralga Memorial Hall. “It’s raw, honest if you like,” says Jennifer. “The works all come in on Friday afternoon next week, they start at 1pm and are supposed to be in by 4pm and we have them hung by 8 o’clock that night. There is nothing pretentious about it all. Within that it is still done professionally, all the works have labels indicating who the artist is, the title and price.” 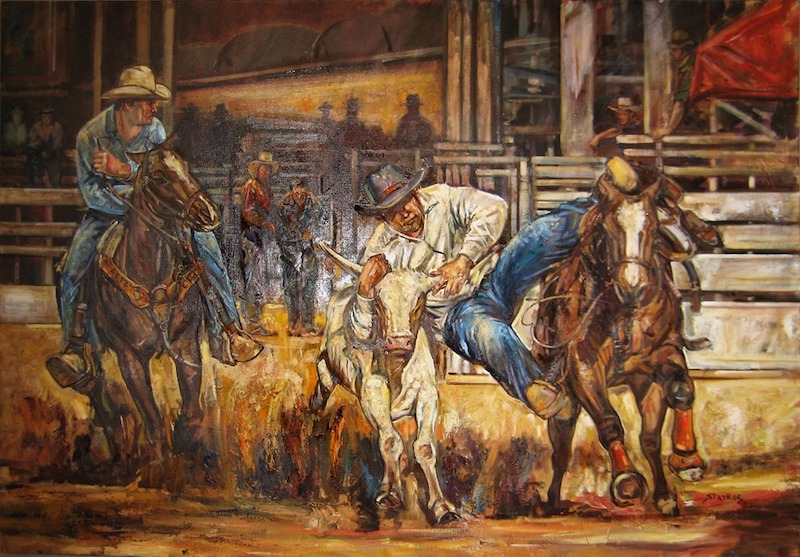 Everyone who attends judges the $200 ‘People’s Choice’ award, the main prize.

Scratchboard artist Michelle Peddle drew on her inspiration and connectedness to Indigenous art and people in “Welcome to Country’’, a striking portrait that won in 2018. “I mainly use a knife to remove and reapply black ink in multiple layers to create the art work,” the Southern Highlands artist says.

Sealed, inspiringly scenic roads across the Abercrombie River to Oberon and Blue Mountains bring motorbike clubs, cycling and car clubs down into the village of 460 people. Open fires at the pubs and a lack of poker machines add to the country charm.

Jennifer says the art show generates good sales. “Say there are 300 works, at least 60 will sell, that’s a high proportion to sell at any sort of weekend art show. So, artists continue to support it because there is a good chance they will sell an art work. People say, ‘I will go to buy something’ so there is that sort of atmosphere as well. I can remember shows at the gallery and elsewhere, where you hardly sold anything,” says Jennifer, who was the regional gallery director for 23 years.

Goulburn artist Stavros Papantoniou who studied at the Julian Ashton Art School, Sydney and in Europe, won the 2016’s people choice with “Rodeo”. He will open the show and conduct workshops next weekend.

Paintings sell for about $300 to $400. The Progress Association keeps a small percentage per sale, and serves good food and wine at the opening. Jennifer’s suggestions for investing proceeds on improvements have been declined, which she accepts. “It is a country art show, and that is the attraction. The main thing is the show is coming from the heart. It is a much-loved show and everyone gears up for it,” she says.

Is that Trinity College, Canberra…or Goulburn ?

CycleLifeHQ has also mapped out some great rides and local business experiences in Taralga and the region - including some perfect long weekend cycling escapes. What a great opportunity to enjoy art and cycling - something for everyone! Visit Upper Lachlan - The Shire of Villages https://www.cyclelifehq.com/en/destinations/australia/new-south-wales/upper-lachlan

Michael Johnston outside the circle :(

Catherine Esmerelda Romaneika only by 4 kms

You should have a +- thing going

Sam Cosgrove. Will you have your work on show?

Sonia Ellem yep. I’ll have a couple of paintings in the show and also other little things out and about.

Hopefully get a big turnout from Canberra putting it on RiotACT.

Yes, I have got Jo thinking about next Sunday for lunch.

Hans Dimpel and book. We will see

Garry Webster we are going to Snowy Vineyard & Microbrewery for wine tasting next Sunday. My second favourite place on earth.

Garry Webster this would be the Argyle inn we have been talking about.

Candace Driscoll - 38 minutes ago
Bel Lee The whole system needs an overhaul. It makes no sense to charge the kids, but potentially it sounds like they are mak... View
Candace Driscoll - 42 minutes ago
Lauren Herbert Wow that is a lot of money you have to be making. Must be above the average wage. View
William Coats - 47 minutes ago
The Act Greens who have supported labor for all but one of the last five terms of government went to the last election with t... View
Property 6

Kathleen Lee - 5 hours ago
What! They are historical buildings. Don't be so silly. View
Glenys Callaghan - 7 hours ago
I love these buildings, they represent Canberra to me. I hope they are never pulled down as they are part of Canberra’s his... View
Property 6

There are 2789 Canberrans on the ACT waiting list for public housing and former Barnardo's mother of the year and...
Opinion 48

The plight of former Barnardo’s mother of the year and mum of seven Belinda Nunn brings into sharp focus the housing...
Food & Wine 48

A glass artist turned sculptor with a bright future