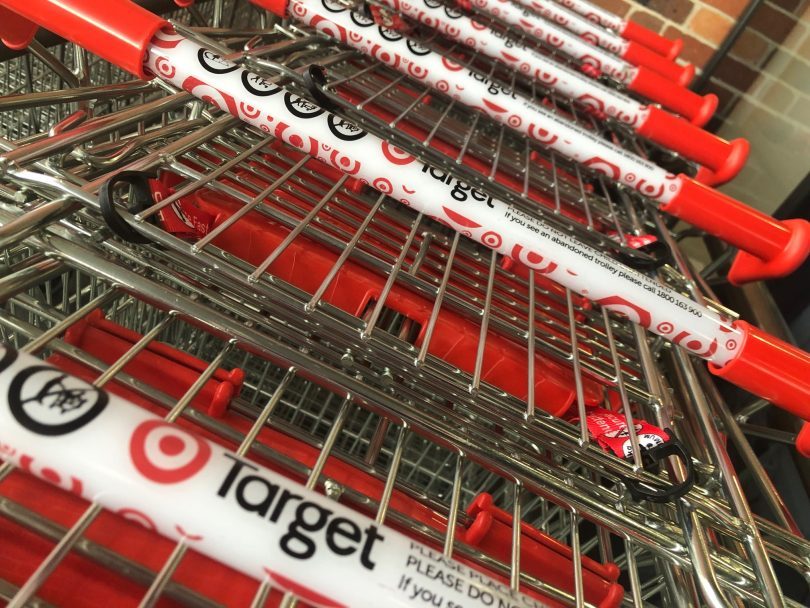 Target stores will close or convert across the South East and ACT. Photo: File.

UPDATED May 23: Following yesterday’s announcement of a major shake-up among Wesfarmers retail brands, Target has announced which stores will close and which will change to Kmarts. In the ACT, Weston Creek will close in early-mid 2021. There’s no indication about the other Canberra Target stores.

In the South East, the Cooma, Cootamundra, Merimbula, Nowra and Wagga stores will all close in early to mid-2021 among other regional stores across NSW.

Target stores being converted into Kmart in the South East include Bega, Tumut, Ulladulla and Yass, from early to mid 2021.

May 22: The network of Target stores that services many communities in the ACT and South East NSW will undergo major changes, including multiple closures, Target’s parent company Wesfarmers announced to the ASX today.

Wesfarmers notified the markets of restructuring costs and provisions totalling approximately $120 to $170 million before tax, primarily reflecting Target store closure costs, inventory write-offs and a restructure of the Target store support back office.

In a statement, the company said they had been forced to “address the unsustainable financial performance of Target”.

Practically speaking, as many as 1,300 of the existing 13,000 staff could lose their jobs as Target stores close or are converted into Kmarts. The Target brand will remain intact and some stores will stay open but Wesfarmers intends to convert many of them into Kmarts with a different retail profile.

There are a number of Target stores in the ACT including at the Canberra Centre, Belconnen, Tuggeranong and Weston Creek. There are also target stores in Yass, Goulburn, Cootamundra, Merimbula and Tumut. Wesfarmers says that all rural Target Country stores will either convert to small format Kmart stores or close.

It’s not clear what their intentions are for city Target shopfronts and the closure locations have not been made public yet.

The move has been greeted with widespread criticism, including calls for boycotts.

“They make billions out of Australians and are turning their back on the most vulnerable … they don’t give a rat’s about us,” he said today. “If you’re not going to support one another, then don’t support them.”

The company also intends to shift focus from shopfronts to online and while COVID-19 is likely to have been a catalyst for exiting commercial leases and job cuts of around 10 per cent, financial analysts say that concerns about the chain were well established before coronavirus reared its head.

“Following the completion of the first phase of the Target review, Kmart Group has identified a number of actions to accelerate the growth of Kmart,” the stock market statement said.

Chief executive Rob Scott said today that Target workers would be offered redeployment to Kmart, Bunnings and Officeworks, which are also owned by Wesfarmers.

“For some time now, the retail sector has seen significant structural change and disruption, and we expect this trend to continue. With the exception of Target, Wesfarmers’ retail businesses are well-positioned to respond to the changes in consumer behaviour and competition associated with this disruption,” he said.

“The actions announced reflect our continued focus on investing in Kmart, a business with a compelling customer offer and strong competitive advantages, while also improving the viability of Target by addressing some of its structural challenges by simplifying the business model.”

The company began in Geelong in 1926 as a drapery. Target stores across regional Australia are often the only general retail stores in country towns. The closures will take place over the next 12 months.

That's a shame Target has much better quality than Kmart. I don't shop in Kmart much because of the quality don't know where I will shop once this happens

How good will it be if the one in the city becomes a Kmart Rachel Sims!!!!

Target Weston creek store is probably their smallest of all in whole ACT. They only have cloths and also limited in variety. I live nearby and if i have to go to Target, I prefer to go to civic or Belconnen.

Jessica Laing I’m torn more kmarts is awesome... but I do like me a target

I stopped going to both when they got the self serve checkouts and couldn’t get served with a happy, smiling face.

I, personally, don't care much for Kmart. Their new set up is so inconvenient and I now stay away from that setup. Why would you put checkout in the middle of a store?

I do not like Kmart. The new set up is ridiculous having the Checkout in the middle of the store and mostly self serve which I don't like or do.

Same here, Carolyn. When they tell me to self serve, I tell them that I'm not on their payroll and wait to be served. One has to have sympathy with the staff though, they're only doing what they're directed to do.

I feel for Staff to. So many jobs lost with bringing self serve in. Dörte Conroy

K-Mart is still a thing?!

Why are people so incapable of reading the actual article? Reading the comments anyone would think Target is shutting down completely when it isn’t.

And in Canberra the only store closing is Weston Creek and none of the others are changing to Kmart’s.

Ashley Wright That’s exactly right. I was at Target Tuggeranong today and was advised that they are not closing, but the only one that will be is Weston Creek

This decision no doubt has been made by people from behind desks who do not shop in either of these stores !

The only ACT store affected.

Belinda it looks like Cootamundra will be affected too!

Joanna Walker no good at all. We all have our fingers crossed for our towns store 🤞🤞

Kmart is so much better store !

With the prospect of standing in a queue for the privilege of getting into Bunnings a likelihood until social distancing rules are gone, it would be good to see more everyday hardware items available in Kmart – which used to have quite decent hardware sections until the takeover by Wesfarmers.

Mini-Bunnings in more accessible locations would be good, but that’s probably too much to hope for.

I'm not sure boycotting Wesfarmers other interests is the best idea Mr Littleproud. All that will do is cause those businesses to be unprofitable and close, putting more people out of work and affecting the millions of Australians who's superannuation is heavily tied up in Wesfarmers shares.

I used to buy all my son's clothes at Target, always great quality and choice. Kmart not so much, cost low but also the quality.

Neridah McMinn - 5 minutes ago
My absolute favourite place for a Saturday morning breaky 💕 View
Graeme Jeffries - 43 minutes ago
I always stop there for a great coffee and toasted cheese and tomato sandwich. A friendly place and service with a smile! May... View
Fran Morrison - 44 minutes ago
Congratulations ! Nice to see these familiar faces . Well done on the service you bring to Queanbeyan. Bruce & Fran View
News 4

Natalee Gersbach - 9 minutes ago
No need yet. Will wait and see if this cooler weather changes that.... View
Chris Threadgate - 13 minutes ago
Arggh I thought it was freezing 🥶 here last night can only imagine there🥶 View
Jackie White - 36 minutes ago
I've had it on nearly 24/7 for a month! #gettingold View
News 83

Jo Hann - 17 minutes ago
Nada Krstin and, addressing your query as to whether they're qualified, there's no cognitive test either. We do not deem an e... View
Jo Hann - 19 minutes ago
Nada Krstin there are 16 and 17 year olds who earn over $18k. The potential to pay tax is all that should be required, though... View
Nada Krstin - 9 hours ago
Jo Hann see my recent post to reply to your "if you pay tax, you should have an option to vote for the government that spends... View
Sport 6