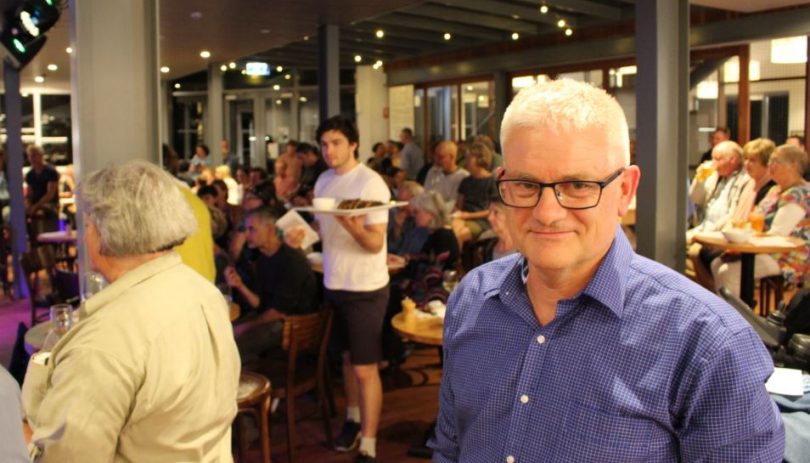 A town that has championed grassroots action against climate change has perhaps fallen victim to it, according to a longtime greenhouse gas campaigner.

Tathra resident and local orthopaedic surgeon, Dr Matthew Nott believes the bushfire that scorched his town on March 18 was supercharged by climate change.

As the founder of Clean Energy for Eternity, Dr Nott and his group have been successful in raising funds over the last 12 years to install solar panels on all but one of Tathra’s community buildings – the one left is the Aussie Rules clubhouse at Lawrence Park, fundraising is underway now.

Speaking at Tuesday nights meeting of the Sapphire Coast Regional Science Hub at Tathra Pub, Dr Nott explained it was time to draw a link between the loss of 65 homes three weeks ago and the impacts of increasing carbon dioxide levels in the atmosphere.

“I really understand the sensitivity of talking about climate change when friends of mine have lost everything except the shirt on their backs,” he says.

A crowd of around 150 people, some of whom had lost their homes, listened on.

“March was the seventh hottest month ever recorded in NSW, but the eighteenth (18th) of March was an extraordinary day,” Dr Nott explains.

“It (March 18) saw the hottest March temperatures every recorded between Sydney and Eden, Sydney was over 40 degrees on that day.

“You can’t say that this bushfire was caused by climate change but you can say that this kind of bushfire is going to occur more frequently as we get hotter,” he says. 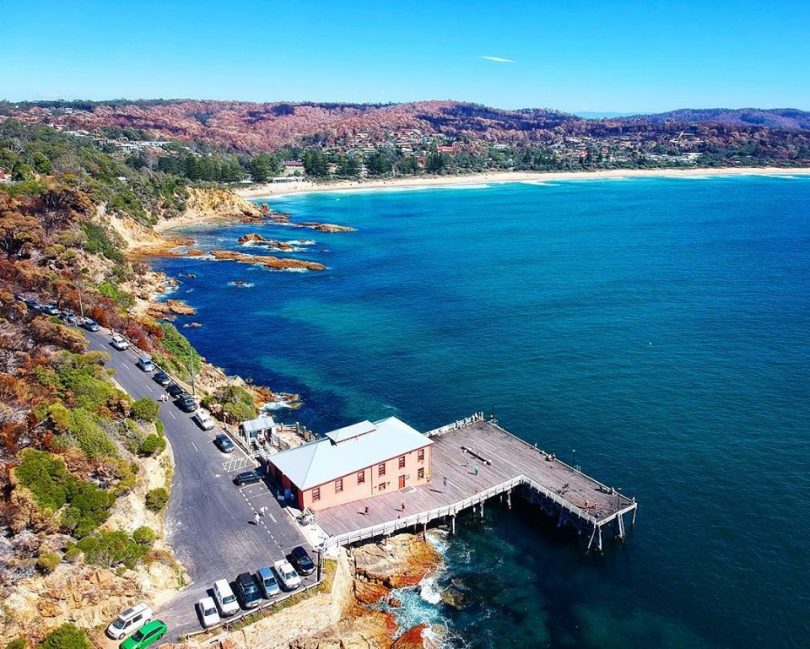 Tuesday nights pub talk was a clarion call for bush coastal communities dotted along the Far South Coast, towns like Tathra surrounded by bush with limited access in and out.

“We’ve only just started to see climate change, it’s about to get a lot worse,” Matthew Nott says.

The Bega Valley has heard Dr Nott speak many times, but this is perhaps the most strident they have seen him, and as he tends to do, the respected surgeon pointed to the solutions and opportunities.

“How much more fossil fuel can we burn?” he asks.

Pointing to data from NASA, Dr Nott suggested if fossil fuels continued to be burnt at their current rate (13 billion tonnes per year) the world would need to stop burning coal and oil altogether in 15 years time to stay under the 2-degree warming target set by the Paris Climate Agreement in 2015.

“We have already warmed by 1.1 degrees,” he says

“The longer we take to start reducing our emissions the more drastic our actions are going to have to be.” 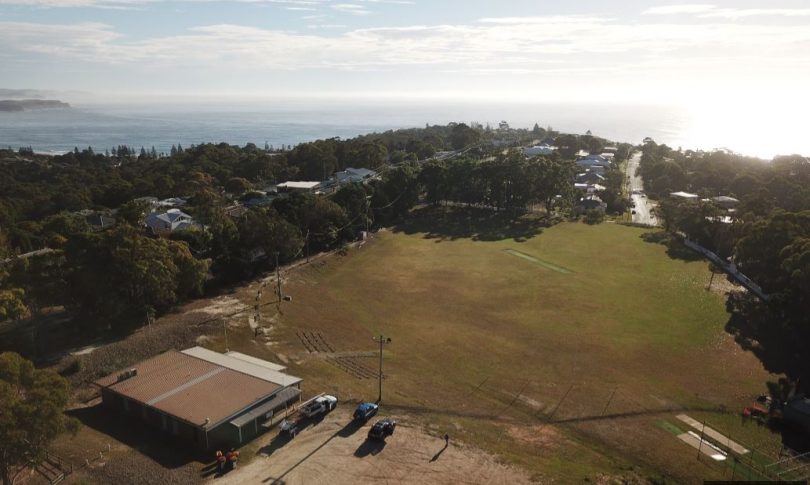 Dr Nott then detailed the amount of coal left in the ground, “About 15 times more than is required to warm our plant by 2 degrees, we have to leave fossil fuels in the ground.”

Closing the Liddell Power Plant in the Hunter Valley by 2022 is key according to Dr Nott as is shutting down the development of Queensland’s Adani Coal Mine.

“The Chairmen of AGL (owners of the Liddell Power Plant) says they are going to replace it with renewable energy, with gas, with battery storage, and that that is going to be cheaper than keeping this thing (Liddell) going.”

And when it comes to Adani, “About 3 billion tones are going to come out of this mine, this is not the time to be opening up the biggest coal mine that Australia has ever seen.”

“If this mine goes ahead it will wipe out any attempt that Australia makes to reduce our emissions many times over,” Dr Nott claims. 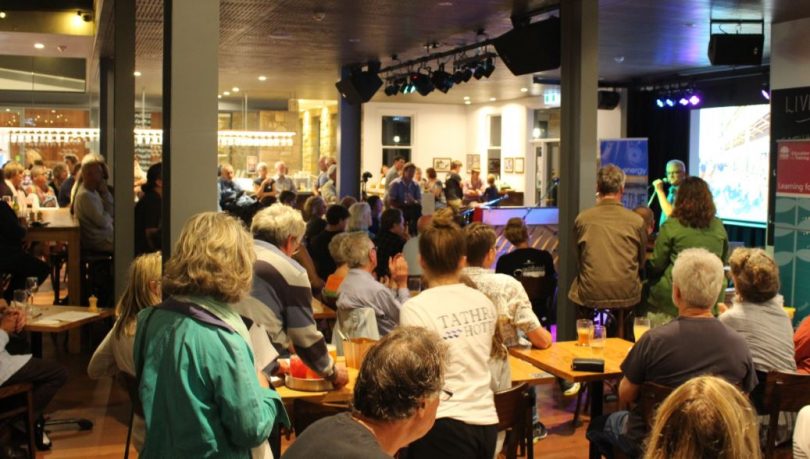 Around 150 people gathered for Science in the Pub at Tathra Pub. Photo: Ian Campbell.

In closing, Dr Nott called on the community to continue to show leadership and action on climate change.

He pointed to the new solar installation on the roof of Tathra Beach Bowling Club Club, “This has nothing to do with Clean Energy for Eternity or community fundraising, this is a big installation about 40 kilowatts, that they put in themselves because that was the cheapest thing to do, solar energy is now cheaper than coal-fired electricity.”

Australia’s 305 surf clubs are the next aim for Clean Energy for Eternity (CEFE), solar panels powering lifesavers is the aim. CEFE has already assisted Far South Coast clubs to go solar except one, the newly renovated Batemans Bay Surf Club at Malua Bay – donations are now open to help make that happen.

“There is so much at stake, the way that this town has coped with the catastrophic bushfires is a testament to the strength of this community, we will rise above the fire and be stronger than ever, leadership on climate change is part of that,” Dr Nott says. 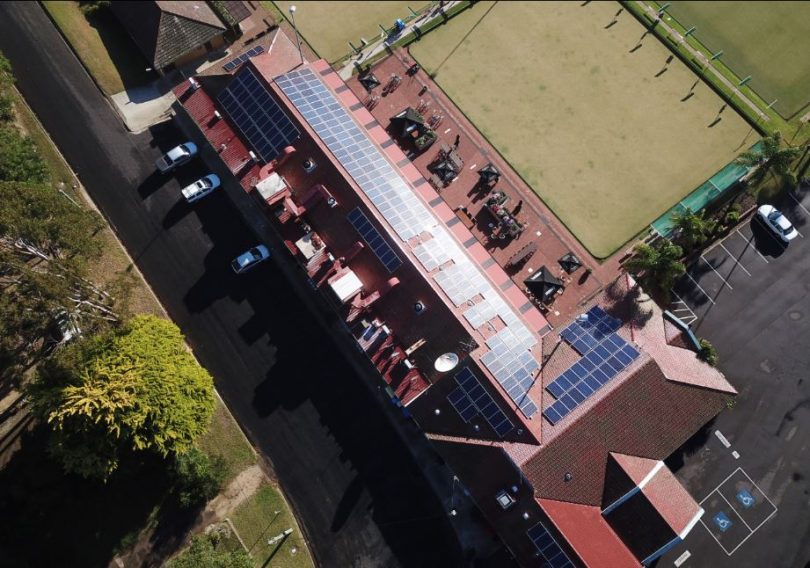 I was in the area on the day of the bushfire and can say I experienced weather conditions totally out of character with what one would expect on the South Coast for that time of year. Same with conditions in Canberra today. The excess heat etc has been caused by a high pressure system that has built up across the inland parking itself over the top of us. Guess I will just keep picking ripened tomatoes, strawberries etc until it disperses. I am not speculating what has caused it, but do note that each month seems to be warmer and drier than the equivalent month over the last few years. I also notice that volunteer bush fire fighters are busier and busier.

I was going to donate to the Tathra Bushfire Appeal, but as soon as I read this and heard that Tathra is “a town that has championed action against climate change” I kept my wallet well and truly shut. Stop this nonsense about “climate change”. It jumped the shark several years ago and is now seen as infantile, insensitive and grossly ignorant.

He should have stopped there and it’s grossly insensitive to use this type of incident to further the arguments around climate change.

The only thing that “supercharged” the Tathra bushfire were the very combustible houses built in it’s path.

The situation was exactly the same as it was in some Canberra suburbs in 2003 where bushfires of the same intensity had passed through twice in the previous century.

Nothing to do with climate change.

Steve Hugler - 14 minutes ago
Troy Scott there’s still time for you to make a shot put comeback mate. 3 years and you could be at the Olympics!... View
Liam Timothy-Nesbitt - 2 hours ago
Tariku Fitzgerald-Holmes We’re up there... View
Mark Flack - 3 hours ago
Compare it to a little place call Crookwell in southern NSW ! View
News 35

Dee Kaden - 43 minutes ago
That could almost be 5,400 homeless off the streets!!! View
Slim Hunter - 2 hours ago
Natives or weeds that require watering?🤔 View
Lifestyle 24

Jim Webb - 47 minutes ago
Looking forward when it reopens. 2019 image View
Di Green - 2 hours ago
I so enjoy these gardens View
Vee Bee - 5 hours ago
We miss it so much :( View
Community 32

Chris Davis - 49 minutes ago
Hope they check out how Narooma runs it View
Steph Hamleed - 1 hour ago
Melanie Leedham bring the kids to this View
Acton - 2 hours ago
In 1992, a shipping container of 28,000 rubber ducks fell overboard on its way from Hong Kong to the United States. Carried b... View
News 17

Sam Oak - 1 hour ago
Wrong, even with no restrictions the death toll from covid would still be less than the flu. That’s because people naturall... View
MERC600 - 1 hour ago
Well had a quick look at this, a heap of possible dates and possible openings and possible closings ( if it goes backwards ).... View
Capital Retro - 2 hours ago
Facts have nothing to do with politics. View
Sport 17