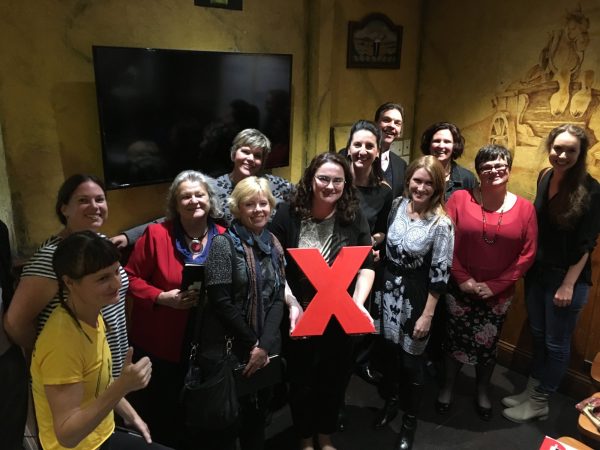 On Tuesday night I not only attended the TEDx Canberra Open Mic night (a bi-annual event), but I also decided that I would volunteer to speak as well, just to get the full flavour of the event.

I don’t know about you, but I am a Ted Talks fan from way back – and I am pleased to say that I have been fortunate enough also to have attended all but one of the annual TEDx Canberra events (I was overseas at the time that I missed one), since its inception. I find this the best kind of inspirational entertainment, education and social event for mixing with people who have ideas worth spreading, as well as people who have the passion for learning them.

It’s fertile territory for sure!

So the idea behind last night according to the new TedXCanberra licensee, Ingrid Tomanovitz, is this:

“The purpose of the Open Mic night is to give people the opportunity to pitch their ideas to our team, in three minutes or less, as a kind of open audition. We do pay close attention to everyone’s ideas and some of them might even end up on our stage.”

The TEDx team used www.menti.com (a great measuring tool when you want people to vote anonymously), for the audience to register their responses after each pitch. Melanie Greenhalgh was awarded an ‘audience encouragement award’ at the end of the evening. Her reward – a copy of Chris Anderson’s book: TED Talks (very apt I thought). All presenters received a swish TEDx notepad and pen as well.

As a presenter on the night, it would not be ethical of me to praise any one performance above another or even to comment, but suffice to say that the evening was a lot of fun. There may be one or two invited onto the stage in the future, so watch this space. Of course, we also had drinks and counter meals to sustain us at the wonderful King ‘O Malley’s pub.

Ingrid and her team did a superb job of making us all feel very valued and her MCing skills were excellent, even through some minor technological challenges.

TedX Canberra was started by Stephen Collins, as its original licensee, and he did a superb job. Ingrid took over last year and she has her own innovative ideas of how to make this experience really memorable for all devotees. Make sure you sign up for their newsletter to stay informed. If you have a yearning to speak at a TEDx Open Mic night in the future, I would encourage you to do so – I highly recommend it.

Lynette Furness - 3 minutes ago
The thing about canberras roads is that they have cycle ways all ove no real need to use the roads View
Jackie White - 21 minutes ago
Just yesterday, in Civic, when I was stopped at a red light, a cyclist zoomed up in between the cars , shot through the red l... View
Jackie White - 23 minutes ago
Jill Worrell Agree. The cyclists who show the courtesy of ringing a bell and few and far between. View
Opinion 149

Philip Howe - 21 minutes ago
What link? View
Dianne N Chuck Falzon - 2 hours ago
Agree with you David 🇦🇺 👍 View
Jenny McInnes - 2 hours ago
Rowan Hartcher as are many non indigeous, that is a fact!! So what has that got to do with changing the date? Do you have any... View
Opinion 9

Acton - 32 minutes ago
The hypocritical Victorian government is endorsing this elitism by allowing international tennis players in, but closing bord... View
Adam Jovanovic - 36 minutes ago
No its not this Australia sport players are who we worship along with alcohol View
Phil Andrews - 2 hours ago
‘Statesman’, ‘our’, Ian Bushnell what are you smoking...? View
Opinion 51

Peta Siebert - 11 hours ago
Kris Doph 2003 fires was caused by a lightening strike. The fire started in NSW and the NSW RFS left the fire to burn until i... View
Robyne Mitchell - 16 hours ago
What about the people who lost their livelihoods and houses as a result of this fire? View
Food & Wine 31

Indigenous people in the ACT are experiencing increasing incarceration rates and over-representation in the justice system, with a ministerial briefing...
Food & Wine 31

@The_RiotACT @The_RiotACT
What's happening at the One City Hill site? Find out why a crane has been installed https://t.co/GQGdVlwgI7 (1 hour ago)

@The_RiotACT @The_RiotACT
A dragway gets the thumbs up from many of you. And on road matters, this week's poll asks if cyclists get a fair go on Canberra's roads? https://t.co/EC199gbmZv (14 hours ago)