One of 40 bus stops found to be most unsafe for women: Bus stop 4357 in Higgins has an unlit pathway along fencing parallel to Southern Cross Drive at the base of an embankment of trees and powerlines. Photos: Women’s Centre for Health Matters.

Many of Canberra’s bus stops are not safe for women, according to a new report that identifies 40 in particular which have features that make it easier for women to be attacked without being seen.

The report, Making ACT bus stops work for women, from the Women’s Centre for Health Matters, says the stops lack sufficient lighting, are isolated and have areas or approaches where women could be trapped.

Its audit of the ACT’s bus stops followed a survey it conducted after hearing that many women said changes to the ACT’s bus routes had affected them and their feelings of safety, which are influenced by a perceived risk of sexual assault.

The results of the survey were then analysed to identify the specific bus stops which women had highlighted, and 40 across Canberra were selected for further investigation because they were seen as the most unsafe for women.

CEO Marcia Williams said gender should be taken into account when planning for new suburbs and their infrastructure and transport options.

She said that in the ACT there was a crime prevention guideline to urban design but not one around perceptions of safety.

“For women the sorts of places that they feel unsafe aren’t the same as where men feel unsafe,” she said.

The centre had been involved in many planning consultation processes and a lot of people raise the issue of women’s safety but when the reports were written that concern was often diminished to a line about safety in general, rather than about the impacts on women that stops them using certain areas, she said.

Ms Williams said the photos in the report clearly show how isolated some bus stops are. “I think a lot of men would be surprised how exposed those areas are,” she said.

Many women also said they would not allow their children to kids use them as well, she said.

Copies of the report have gone to Transport and City Services Minister Chris Steel, with whom she has a meeting next week, and Minister for Women Yvette Berry.

The bus stop audit involved women walking through a physical environment and evaluating how safe they felt. 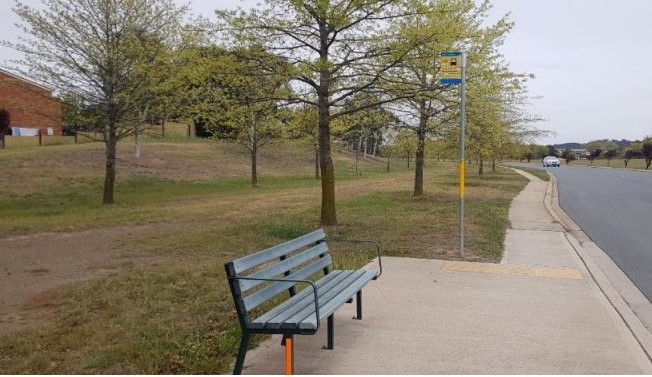 Bus stop 4711 in Ngunnawal has no lighting and shelter in the immediate and surrounding area of the bus stop, is isolated, and has numerous entrapment sites.

It found many of the bus stops lacked direct lighting, that street lighting was insufficient to illuminate the stop and that approaches and paths were not lit.

Bus stops on arterial roads were isolated due to large green spaces or nature reserves, others had a lack of visibility and line of sight from any residential areas and views were obstructed by back fences and alleyways.

Paths leading to underpasses, alleyways and other areas which were not visible to pedestrians or cars or houses were considered to be possible entrapment sites, as well as dense bush or trees and embankments nearby.

The report said bus stops should be placed on nearby residential streets where the footpath passes the front of houses.

“This also means that pedestrians who need to cross the road after alighting at the bus stop are crossing a smaller, less busy street than if the bus stop had been on an arterial road,” it said.

Bus stops needed to be lit but so should the paths leading to and from the bus stop.

“Safety does not cease to become important when a person leaves the bus stop, but remains important in their decision to use the bus stop for the entire distance between their home and the bus stop,” the report said. 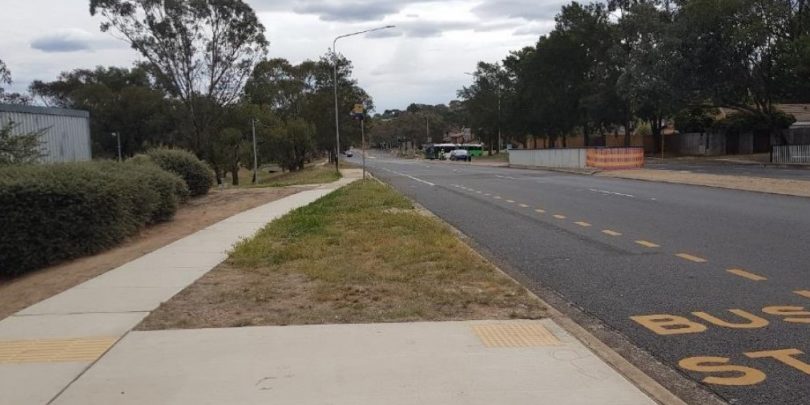 Dense hedges line the pathway towards bus stop 1340 on Sternberg Crescent in Wanniassa.

“These changes will make buses a more attractive and user-friendly transport option for a wider diversity of people in our community, including those who are most in need of an affordable, accessible, safe transport option.”

Some of the survey responses highlighted a lack of lighting and visibility at Canberra bus stops, citing:

Capital Retro - 4 hours ago
Where does CBR get its income from? View
chewy14 - 6 hours ago
JC, There's 4 comments, who's this mythical blue glasses brigade whatever that's supposed to mean? And I can't see where anyo... View
News 25

Pat Gagel - 5 hours ago
Maybe not. I have regularly used the service since 1992. Love it. Still the most sophisticated form of travel. Much better th... View
Marco Spaccavento - 5 hours ago
Pat Gagel I’m not a user. 3 a day also hardly justifies a new station… View
Pat Gagel - 6 hours ago
David Malcolm they aren’t a problem. Believe it or not, biggest issue is a grade crossing on a bend between Bungendore and... View
Property 22

Anthony Willing - 5 hours ago
Paul Mills the same as every old / wheelchair person in every multi-storey in every city in the world.The fire brigade have s... View
Anthony Briscoe - 6 hours ago
Canberra more and more of this type of development will happen under the Barr Government. Just wait till the tram goes to Wod... View
Paul Mills - 7 hours ago
Becoming a common Canberra vista. View
News 128