The Clever Country by Bruce Hoogendoorn 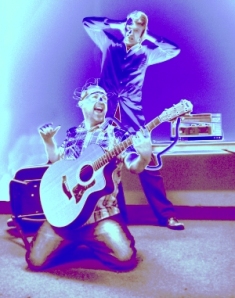 The Minister for Science is furious! Enrolments in university science courses have dropped by three-thousand in five years. So he hires Andrew Dean, an incredibly good-looking researcher, to promote science so young people will begin to think of it as cool and start enrolling.

Andrew Dean is researching Transcranial Magnetic Stimulation, which he uses to mimic the minds of autistic savants to improve people’s ability to draw and play music. But his research has been inconclusive and he loses his funding. The Minister promises, “if you raise enrolments by twenty percent you’ll get a decade of funding”.

But Andrew doesn’t have any impact until he gets into a punch-up with the head of fashion design at a rival uni’. This makes him an instant celebrity. The fight was over a young woman who won a national science award, but has chosen to study fashion design. Andrew is determined to get her into science. Can he do it? And will he reach his target? Or will his research come back to haunt him?

Scott Bell - 1 hour ago
Ya all Dreaming tax man rules who gonna pay for the Friday’s View
Karen Feng - 4 hours ago
4-day work week. Those that meant 3 of those days are double pay. or does it meant we are paid one day less View
Bianca Rossetti - 5 hours ago
I prefer more flexibility options rather than stating 4 days working.. nsw are looking into school hours changing, maybe this... View
News 8

Maya123 - 3 hours ago
Added: I did some research on this. "Trees listed on the ACT Tree Register are protected. They cannot be cut down or altered... View
Maya123 - 4 hours ago
I wonder if being heritage listed gives extra protection to street trees, or not. View
ChrisinTurner - 5 hours ago
Unfortunately street trees are not covered by the Tree Protection Act as demonstrated around Civic recently. View
News 19