The Doll to hit the stage at Tuggeranong Arts Centre

The Doll is set to show at Tuggeranong Arts Centre on Friday, April 20.

Miro Garvan’s The Doll arrives at Tuggeranong Arts Centre this Friday, shining a light on our uneasy and quickly-developing relationship with artificial intelligence.

Garvan’s eerily prescient play is a window into the life of Marko, a recently single 39-year-old man whose reluctance towards marriage and children has seen his long-term relationship deteriorate around him.

Cue Stella: an anatomically-accurate android designed with the specialised purpose of making men happy. Imbued with the views and a loyalty towards her female designer, the Doll draws attention to Marko’s worldview, sparking an examination of loneliness, relationships, and the male gaze. Through a series of dramatic and humorous situations, it becomes clear that the expectations Marko places on his android partner are drawing out the mistakes he made with his real-life girlfriend. All that remains to be seen is how he deals with the confronting realisation that his insecurities might have been within his control all along.

After premiering in 2012, The Doll has gone on to show all around the world, and rehearsals for the Sydney production earlier this year were the subject of a story on SBS. Six years on, the play sits in the context of an increasingly digital world. Even though the interpersonal problems explored in The Doll have plagued us for thousands of years, the state of play in 2018, in which gender equality is in full focus, makes Garvan’s exploration as vital as ever. It’s unnerving to consider the glacial pace of societal change compared to the ever more real prevalence of artificial intelligence.

Miro Garvan is one of Europe’s most celebrated contemporary writers. Born in Croatia in 1961, his novels and plays have been translated into 40 different languages and his dramas and comedies have taken to the stage all around the world. Garvan is also the only living dramatist in Europe that has an entire theatre festival, Garvanfest, dedicated solely to the celebration of his works, many of which linger on the philosophical and the existential.

The production is directed by Croation actor and director Romana Petrušic and stars Australians Firdaws Adelpour as the male lead and Jacynda Radanovic as the titular Doll. 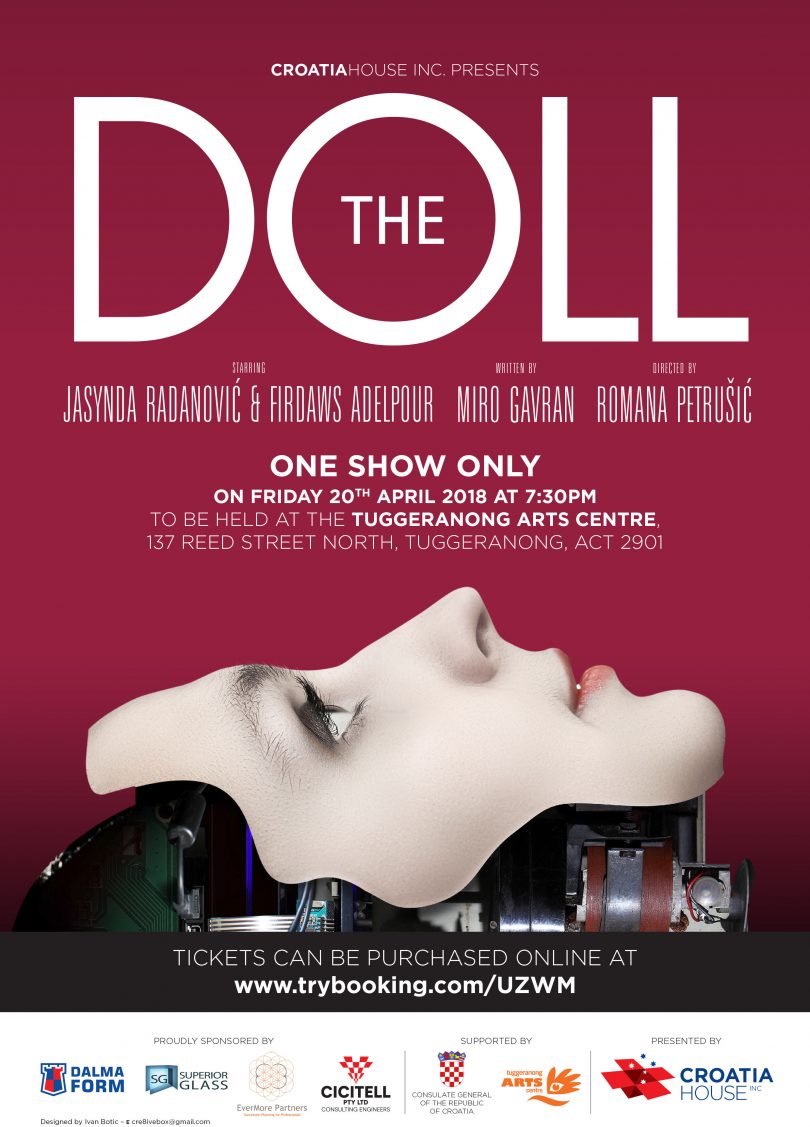 The Doll sports an Australian cast and Croatian director. See below for ticket details.

In Short: The relationship a middle-aged man has with a Doll draws out his shortcomings as a real-life partner.
Where: Tuggeranong Arts Centre, 137 Reed Street North
When: Friday, April 20, 7:30 pm
Cost: Tickets are $29.50 + booking fee, available through TryBooking.

What was the last play you saw that really got you thinking?

WIll definitely check this out on Friday.

A big thank you to the RiotACT team for their wonderful support and contribution to making this event happen. There are a few tickets left to the well-known play entirely in English, so get in asap.

HiddenDragon - 4 hours ago
An overly literal (or, perhaps selectively so) approach to the application of the criteria for different speed zones might ha... View
David Brown - 6 hours ago
Clinton Berry I don’t know of any accidents in the last decade. View
David Brown - 6 hours ago
Toni Isaacson It simply adds more proof to the fact that road fines are simply an easy tax. Highway Patrolmen are tax collect... View
Lifestyle 1

Kathy Schneider - 4 hours ago
One of the highlights of the year! View
Sport 8

Phil Small - 4 hours ago
One of the best and nicest guys ever.....cheering you on GT. View
Cheryl Thuillier - 6 hours ago
Give me a message. I can help. Eat cucumber skin every day. Message me. I can tell you a story that save a friend's life. View
Marcia Bowden - 7 hours ago
Glen, sending positive thoughts x... View
Community 19

Robert Hawes - 8 hours ago
Robert Knight Agreed. It would be hard to make a good bus route though the suburb as it is isolated. Would be better if they... View
Robert Knight - 11 hours ago
You cannot plonk in a greenfield suburb, built all at once, with no dedicated public transport corridors, an inbuilt car depe... View
News 16

Jenny McInnes - 8 hours ago
Angelo Turcin Dr Encrico Taglietti designed the cinema and he won the Australian Arctetects Gold medal in 2007. Clearly you a... View
Trish Roberts - 9 hours ago
Thanks, Andrew! You would certainly know. View
Andrew Pike - 9 hours ago
ANDREI RUBLEV looked great on the giant screen but wasn't the last film. The very last film shown was a reprise of the very f... View
Lifestyle 1

Lynn Stape - 9 hours ago
so great. I was not aware they had a shop. Some really nice things for sale. I love the postcard for Gungahlin with the light... View
Community 41

John Hamilton - 9 hours ago
They have been paid for by rates and other taxes. So they have paid. View
Lynn Stape - 13 hours ago
John Hamilton sigh if you say so..look mate if you want the precious cyclists to be hated more then by all means make all the... View
What's On 7

@The_RiotACT @The_RiotACT
In this week’s newsletter we’re talking COVID, car crashes, Canberra’s newest suburb + one of the finest properties you ever will see https://t.co/utq8zjI7Mq (3 hours ago)

@The_RiotACT @The_RiotACT
In a year of endless disasters, cartoonists say 2020 has been a Dog's Breakfast. MoAD's Behind the Lines exhibition makes sense of it all https://t.co/Fb1EbHEs4B (4 hours ago)

@The_RiotACT @The_RiotACT
ANU researchers have returned from a four-week mission to Macquarie Island to learn more about Earth’s most violent underwater earthquakes https://t.co/zaEAeAj9kH (6 hours ago)