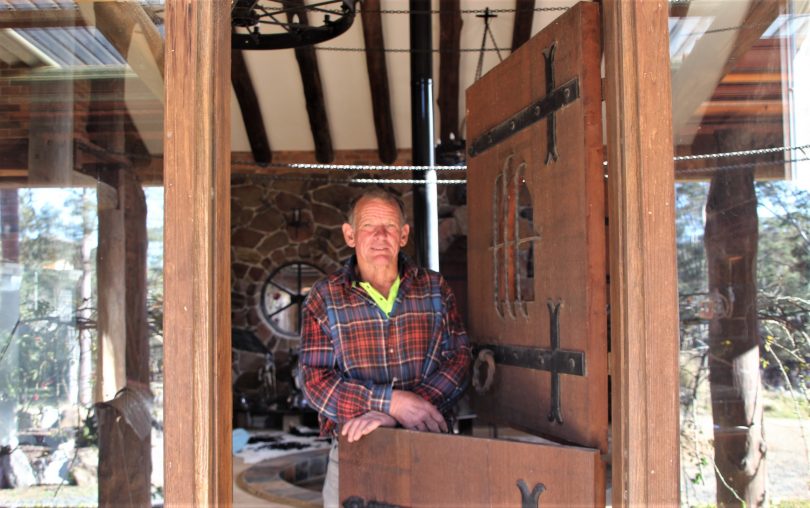 Deep in the forest, on the side of a mountain, lives a Knight and his Lady.

You may have noticed the imposing handmade stone gateway on the Kings Highway between the Clyde Mountain and Nelligen. Black Flat, the stone home of Darrell and Lisa Bossley, sits high above the roadway.

The front paddock is the home of their Friesian horses and Clydesdale cross. You may also see horse games and targets set up.

Former blacksmith Darrell Bossley had always been interested in the medieval period and took up jousting at the tender age of 68.

After a trip to Tasmania five years ago with his new wife Lisa, Darrell purchased their first Friesian – the legendary graceful breed from Friesland, The Netherlands.

Now at 73, Darrell and Lisa travel widely with his stallion S’Calibur, dressed in full medieval armour. 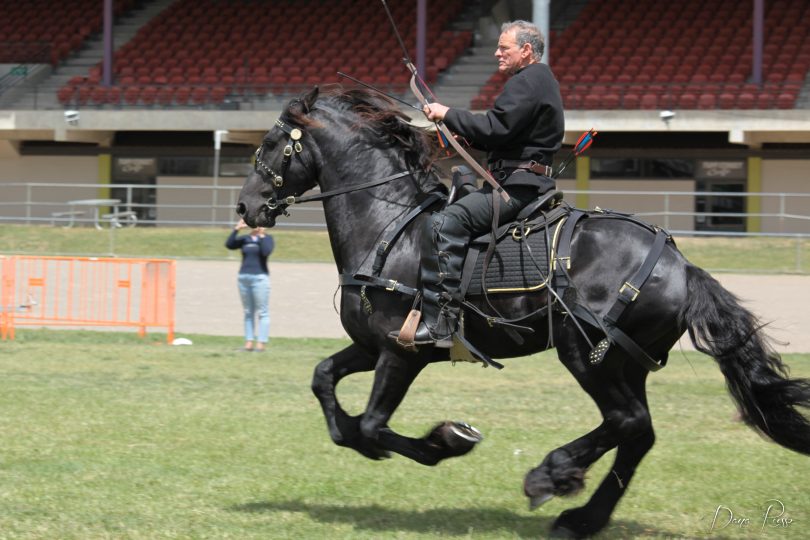 “There are only around 15 jousters in Australia,” says Darrell. “We meet up at events like Ironfest at Lithgow and St Ives Medieval Faire Jousting.”

At an international meeting at the Abbey Medieval Festival at Caboolture a few years ago, there were around 35,000 spectators per day.

It’s not a cheap sport. While Darrell says it’s usual for all their expenses to be paid for big events, a suit of armour costs around $30,000 to $40,000, and then there are the horses.

They have also been to riding for disability fundraisers at Turlinjah and have more coming up in Cowra in late October and Wollongong in September. 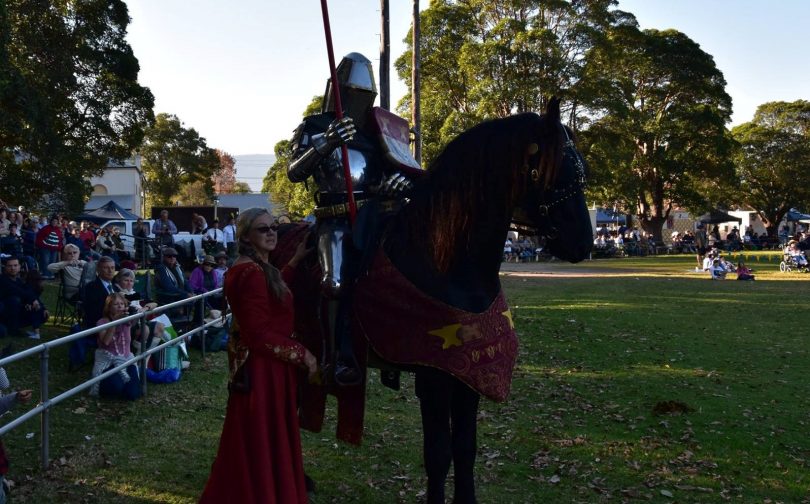 It’s no sport for the faint-hearted. While there might be some theatre in the visual presentation, the physical sport of jousting is full contact – your aim is to knock the other knight off their horse with extra points for snapping the wooden joust. You are allowed to joust anywhere above the waist.

The sport was made popular by the American reality game show ‘Full Metal Jousting.’

Darrell was invited to do a demonstration at the National Capital Horse Show at EPIC in 2018 and has now been asked to do a Skill at Arms event. 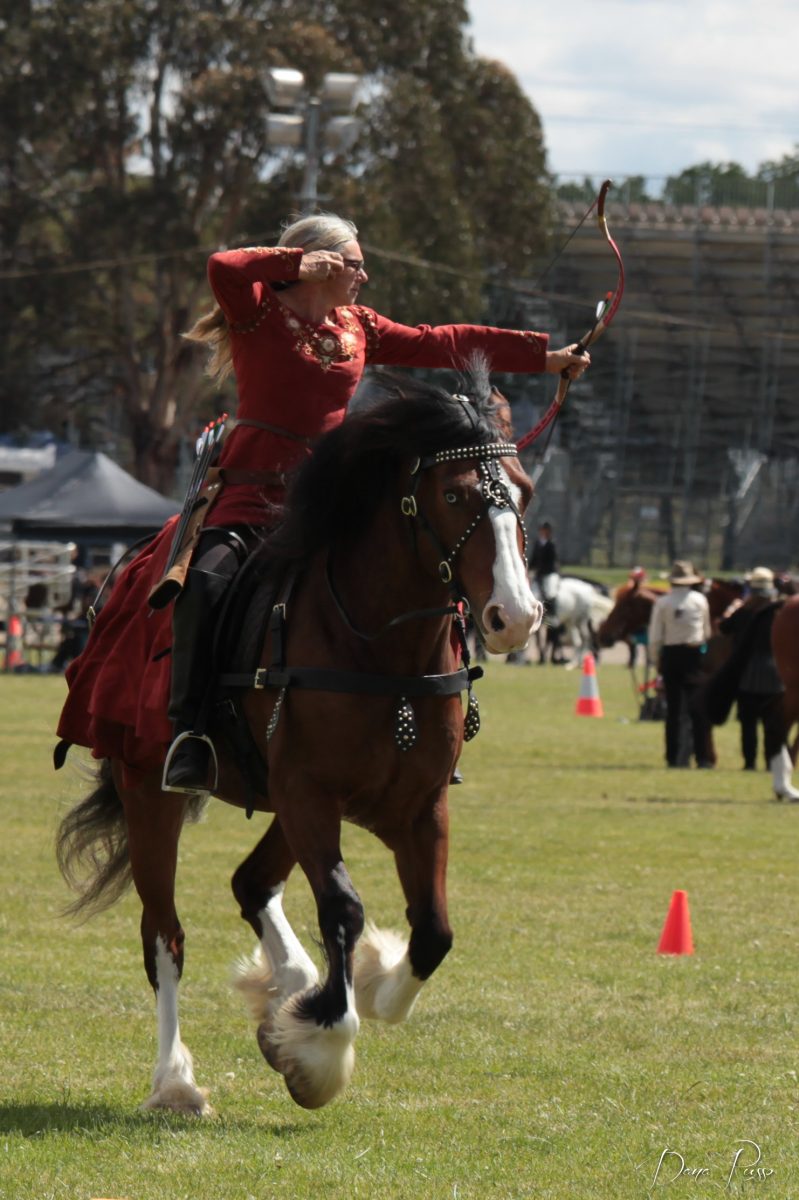 So how did the Bossleys come to this point?

Young Darrell left home at 14 on horseback. He travelled the state rodeoing. Early on a friend taught him to blacksmith, as well as horse breaking and cattle work. Darrell rode rodeo from age 14 to 46, and he shrugs off having “modified a few bones” along the way.

Darrell was a blacksmith for 53 years. His work included remedial and orthopaedic shoeing. He has travelled the world with his profession including working on King Carlos of Spain’s horses, as well and the famous Lipizzaner horses used in Spanish riding schools. 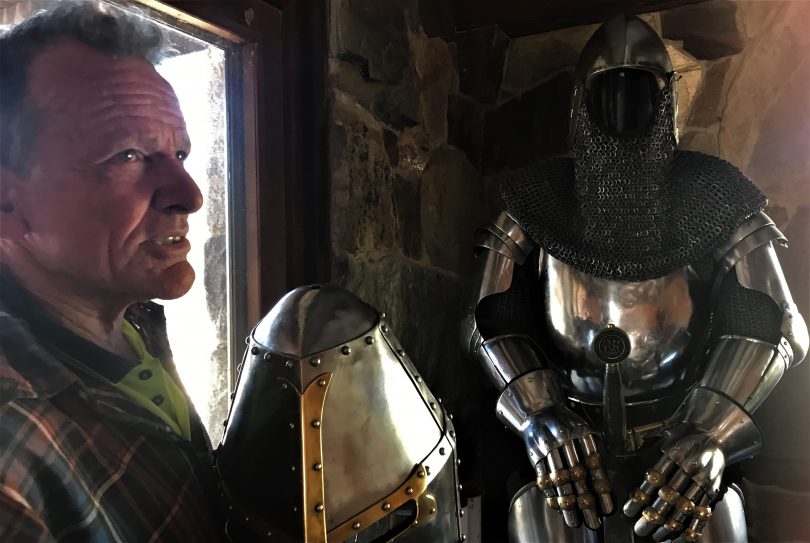 Darrell with his Spanish armour at home. Photo: Alex Rea.

Darrell moved to Batemans Bay in 1965, then as it started to get busier moved out to Black Flat in 1984. According to old-timers, the area became known as Black Flat because it was frequently blackened by bushfire, due to the granite belt that runs through the area attracting lightning strikes.

Lisa, originally from Crookwell, hadn’t ridden since her youth, until taking it up again in 2003.

Darrell’s interest in the medieval period was partly sparked by his passion for karate. Darrell is a 6th Dan in ‘Goshin-Ryu’ style Karate and has taught weapons classes for 40 years, as well as doing some security and bodyguarding work through the Karate Federation.

Darrell draws many comparisons between the Eastern and Western medieval culture and the training of a Samurai and a Knight.

“They are remarkably similar,” he says. “The codes of honesty, ethic and integrity being key to senior warriors.” 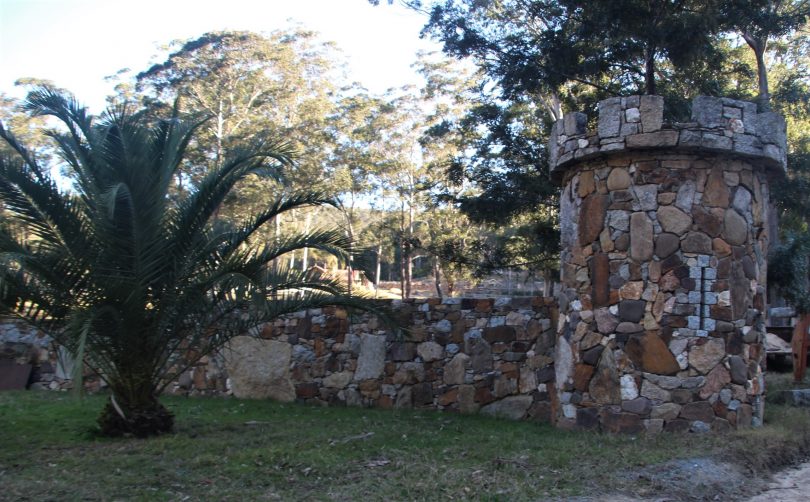 Darrell and Lisa have been running medieval horseback skills clinics for two years.

If you would like to give it a try, bring your horse to the next Medieval Horseback Skills Clinic at Black Flat on August 31 and September 1. Horseback, archer, sword lance and spear techniques will be taught. The clinic is for beginners through to advanced.

I notice your place everytime we pass.

Brook Keir something for the Canberra show?

Have noticed your beautiful horses. 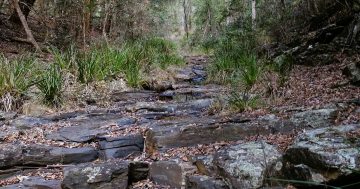