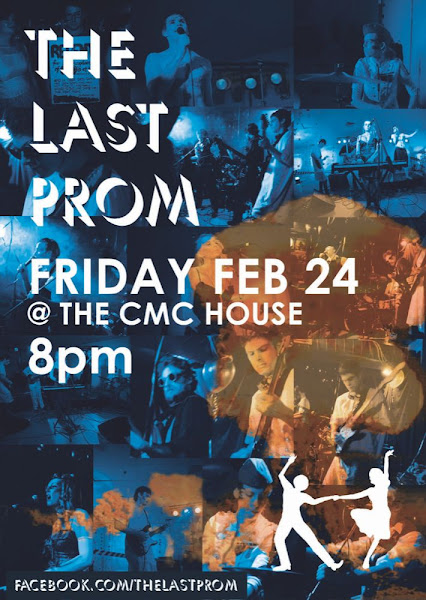 Facebook brings word that the horsepeople of the apocalypse are riding forth with The Last Prom:

2012: The final year of mortal history. Coming of age in a fallen world, The Son Of The Beast begins to ready the Ritual of Armageddon. As foretold by every ancient civilisation, he does this by reshaping the Four Horseman Of The Apocalypse into the greatest pop band in the history of the world: The Last Prom!

A fanatical doomsday cult soon forms around the band; shambling and wild-eyed, they wear tattered formal wear combined with survivalist gear, pagan symbols and apocalyptic slogans. Known as the Beautiful Damned, they are more than an audience- they are vital participants in a blood-soaked dance party of destruction!

Four performances take place, each unleashing one of the forces of Apocalypse: Famine, then Pestilence, then War are all set free through the devastating medium of pop music. The fatal narrative culminates in a final High-School-Prom themed show, in which Death and The Son Of The Beast are crowned as Prom King and Queen and the Beautiful Damned complete the Dance of Armageddon, bringing about The End Of All Things!

What is this? Relax, it’s just an invitation to a big fun dress-up party and concert thrown by an original Canberra band.

The Last Prom is an original show written and performed by the members of The Last Prom. It’ll be performed in late 2012 as a 1 hour theatrical work incorporating story, dance, audience interaction and 10 brand new songs.

The Last Prom is going to develop and promote this work with a season of three shows over early-mid 2012. The first of these shows will be on Friday the 24th of February at the Canberra Musicians Club Home, which will be transformed for the night into a private members club for the Forces of Doomsday.

We encourage all of you Beautiful Damned to come dressed to the nines in their apocalyptic finery. Think high school formal, pop music from any era, and any end-of-the-world theme. Prizes for best costume!

Please contact the CMC at ourcmc@gmail.com for venue details. Be there as Famine, the First Horseman of the Apocalypse, is loosed upon the world!

Party while the world burns!

chewy14 - 7 hours ago
BJ, You aren't meant to bring these things up. The only information allowed is positive. It's efficient, it's modern, it's vi... View
chewy14 - 9 hours ago
JC We don't need news reports, transport Canberra publish the patronage reports. BJ's figures are accurate. https://www.trans... View
bj_ACT - 9 hours ago
Just for the record, the light rail business case for expected daily patronage was quite low in 2019 and we beat that in the... View
Property 5

Capital Retro - 16 hours ago
".... An emblem showcasing medieval queens, crowns, and castles, doesn’t represent 21st century Canberra..." We have all th... View
Stephen Saunders - 21 hours ago
Symbols do matter. The British monarch is the white hereditary chief of the Church of England. An emblem showcasing medieval... View
HiddenDragon - 1 day ago
"Could the Brindabella Ranges be incorporated into the ACT’s coat of arms,..." An image which combined the mountains and th... View
News 1