Experts in buying, selling & renting
Your property, your future
15 July 2021 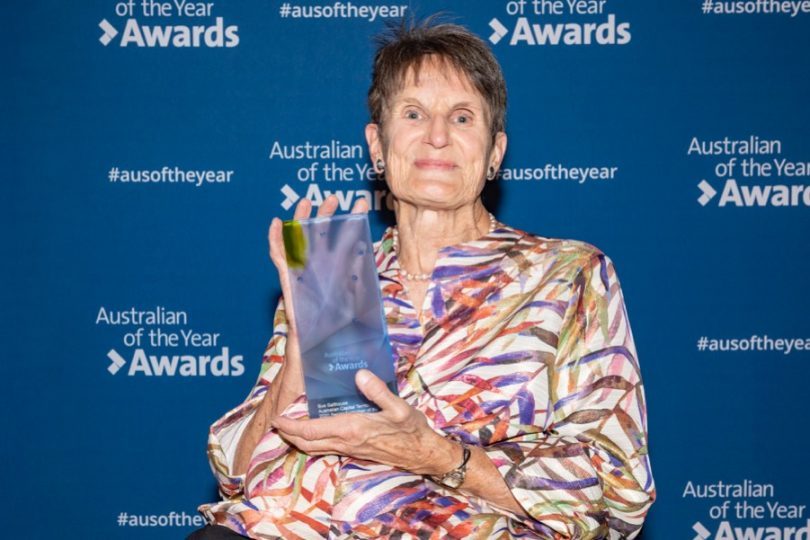 Disability advocate Sue Salthouse when she was named ACT Senior Australian of the Year in 2020. Photo: Supplied.

Disability advocate, the late Sue Salthouse, would be honoured yet slightly overwhelmed by the establishment of a leadership fund in her name, according to her daughter, Luisa Fearnside.

The $75,000 ACT Government seeding fund, to be administered by Hands Across Canberra, will empower people living with disability to pursue leadership opportunities, with specific focus on women and girls.

“Two years ago, Sue announced the establishment of a community fund and I’m proud this newly named fund builds upon the work she generously started,” said Ms Davidson.

Ms Fearnside said it is an “amazing” way for her mother to be acknowledged for the work she had done, particularly as it came on what would have been her 72nd birthday (14 July).

“I think a little part of her would not believe it,” she said. “She would have been very humble about it.

“Mum has been recognised in many ways during the years and every time that happened, she often told us she didn’t quite believe they were talking about her. She was never one to toot her own horn.”

Hands Across Canberra will administer the $75,000 seeding fund on behalf of the ACT Government’s Community Services Directorate.

“They will work with an advisory group comprising Sue’s family and ACT disabled peoples organisations – including Women with Disabilities ACT, and Advocacy for Inclusion – to advise and progress leadership and representation of people with disability,” said Ms Davidson.

Ms Fearnside said she hopes the fund will be the start of a long-term project that is continually supported by philanthropists.

“The number of women with disabilities on boards is really low,” she said. “This is not something that can be fixed in a year. You really need a long-term view so I am looking forward to seeing where the fund takes us.”

“There is no doubt that Sue touched so many people right across our community, and creating a name fund will ensure Sue’s commitment to people with disability and her huge impact on us all is enduring,” he said.