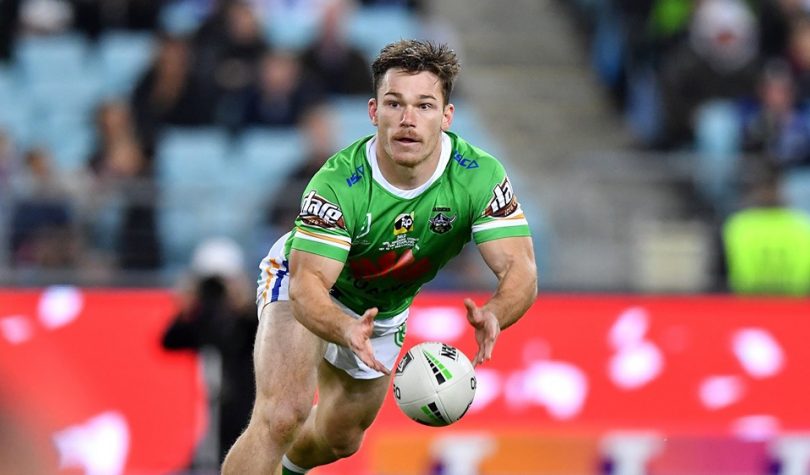 Tom Starling made his debut in the lime green in last weekend’s nailbiter against the Bulldogs. Photo: Supplied.

After his one-year contract with the Newcastle Knights came to an end last year, Tom Starling’s career was at a crossroads.

Just three months after making his NRL debut in the Knights round 25 loss to the Dragons in the 2018 season, Starling admits he didn’t know where he would go next.

But with one telephone call over the Christmas holidays, his new year resolutions and rugby league future changed spontaneously.

On the other end of the phone was Peter Mulholland, Canberra Raiders recruitment manager, offering him a train and trial contract in the nation’s capital.

“When I had to leave Newcastle, I wasn’t sure where I would end up,” he shared. “I ended up going up to Tweed Heads and playing in the Queensland Cup. Peter Mulholland rang me over Christmas and said do you want to come to Canberra.

“I took the opportunity and it has paid off so far.”

The former Newcastle hooker is now on a development contract with the Raiders and made his debut in the lime green in last weekend’s nailbiter against the Bulldogs. It took a little while to get on the field for his Raiders debut and it was the reassuring words of coach Ricky Stuart that settled the energetic 21-year-old.

“I was a bit nervous waiting on the bench there but Ricky said I would go on in the second half if everything goes to plan,” he said. “Ricky told me I have got here for a reason, so just play my game and there is no need to change it so I took that into the game.

“I think the Bulldogs scored in the first couple of sets after I just come on so the game was in the balance. I play with a lot of energy and I thought I could bring a lot of energy when our boys were getting tired and help the boys get the two points.”

Starling is pinching himself when it comes to the turnaround in his NRL fortunes and admits he didn’t think it would come this quickly. But while his NRL dream is lasting, he will learn as much as he can off two great minds at the club.

“I am taking it week by week. It was good to get 20 minutes under my belt on the weekend so hopefully will build on that,” he said. “Whenever Ricky needs me again, I’ll be ready to go.

“I rate Josh Hodgson in the top three hookers to ever play so to have him here, I’m just like a sponge. We also have Mick Ennis down here too so I am licking my lips at the opportunity down here to continue building on my game.”

Evan Speed - 17 minutes ago
When they defrost you, you are still dead 🤣 View
Irene Elford - 1 hour ago
Why is all I can say, if and when they defrost you all your family friends, etc will be gone. View
Katy Did - 2 hours ago
Rachael Axford for these two I reckon😂 View
Opinion 181

Rowan Hartcher - 2 hours ago
Alan Hopkins like wise View
Peter Quinn - 2 hours ago
So when can we celebrate colonisation????. Whatever day is nominated it will always be contested View
Alan Hopkins - 3 hours ago
its not that hard to change the day. just do it... View
Opinion 24

@The_RiotACT @The_RiotACT
Can you see yourself relaxing on the deck of this lovely Lilli Pilli home? The stunning elevated property offers the perfect opportunity to kick back & enjoy life https://t.co/exzSAWdrIG (53 minutes ago)