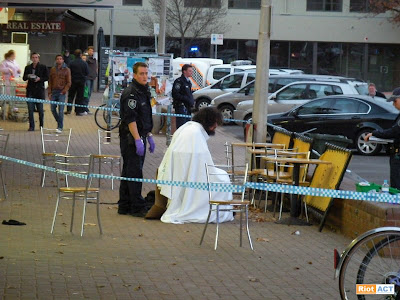 For a couple of weeks now Ainslie residents have been surprised that their shops had a preacher in residence. With long wild black hair and dressed all in black he would stand there addressing no-one in particular making no real sense at all.

The big black headphones clamped over his ears were a particular highlight of the getup. What was he listening to as he preached?

Today at around 4.20 I was having a beer in Edgars when suddenly the street was full of ambulances and police cars.

A little while later a man, covered in blood, was put into the back of one of the ambulances. The scuttlebutt was that he had been stabbed in the neck.

A friend who had been watching proceedings reported that a man was sitting outside Theo’s Takeaway draped in a white sheet.

I popped out to take a quick photograph and noted that the man in the sheet, supervised by police, appeared to be the preacher and was wearing big black headphones.

And here’s the even scarier part:

Returning to the bar I had time to order a pint when a policeman came in and demanded to see the photograph I had taken.

I asked under what power he was making the demand. He replied, as close as I can recall it:

Now I believe I could have, in all lawfulness, refused him and would, eventually, have won. But I might well have lost the use of the camera for weeks and spent a night in a cell. When police are already making illegal demands that evidence be destroyed taking the quick way out to be able to tell the tale strikes me as the better way to go.

Especially as my understanding is that the delete button on a camera does not actually destroy the image, only make it hard to find. As I type retrieval software is working over the card (and disco, it worked). I deleted the photograph with him watching over my shoulder and then we went for a little browse of my camera checking for other images.

If the photograph was evidence: I had been instructed to destroy it, by a policeman, on threat of being deprived of my property.

If it is not evidence: ACT Policing are illegally ordering the destruction of images they find inconvenient, with the threat of deprivation of property and/or liberty.

I consider both possibilities to be of grave concern.

Either way it suggests police are more than happy to use the threat of confiscation of “evidence” to achieve outcomes they have no legal basis for.

[I should note, however, that the police response in general was extremely swift and effective. Around an hour after the incident the man in the white sheet was quietly and gently placed in the back of a van, and his headphones finally removed.]

UPDATE: The Canberra Times story on this is online. The ABC’s report is also available.

FURTHER UPDATE: The police media release on the incident is now online:

A 36-year old Ainslie man is assisting police with their inquiries following a stabbing at Ainslie on July 4.

About 4.30pm police and ambulance officers were called to the Ainslie shops on Edgar Street where a 43-year-old man had received multiple stab wounds to his head and neck area. Paramedics stabilised the man before transporting him to The Canberra Hospital where his condition is listed as serious but stable.

A man was apprehended at the scene and was treated by ambulance officers for minor injuries to his hand. He is currently being questioned by police.

AFP Forensics officers are on site and investigations into the incident are continuing.

Police are appealing for any witnesses to the incident to contact Crime Stoppers on 1800 333 000.

So great that now days we have auto cloud storage.

police making threats without a lawful reason? throwing their weight around? never! don’t believe it!

police are always polite, or so we are told 🙂

I am sure the people from Theo’s will be very reassured that they were not the only ones up till all hours that night because of photos. They were not kept up because of any indignation over the violation of their rights, but because the police needed to take photos of what was once their place of business that had now become a crime scene. They did this because they wanted to cooperate with police to ensure that all evidence (including the front door handle) was collected.

Maybe you could spare a thought for the owners of Theo’s too. This is a family run business – thank god none of the young members were there that afternoon. This is an event just the same as if someone came into your home and perpetrated violence against a family member. They were forced to close for the next two days to hire professional crime scene cleaners – although after the comment about the floors finally being clean, maybe they should have slopped around in the blood with mops and buckets as was suggested to them by the police.

Freedom of expression is wonderful – but no-one should lose sight of the impact of these sort of events on people’s lives.

Lets just say my 20 years of actually being a cop means I know a little more about this than you. You are not the appropriate person to try and be speaking with any ilk of authority on matters legal here.

Leave it alone, you are punching well above your weight, all good intentions aside

Then the matter is dropped.

@JB: I still maintain that the Officer made the right decision in regard to victim/offender identity protection. I also believe he acted with discretion and appropriately.

As weird as it may seem, I like The Preacher and have been feeling quite sorry for him the past week. I really hope he’s given the medical and psychiatric help he needs. I liked his harmless, less than in-your-face style and even thought he was becoming a bit of a Canberra institution. I can’t help but think the victim goaded him somewhat but that’s yet to be established.

I still can’t see anything wrong with JB’s angle though.

Ah Johnboy, next time make sure you’ve got a pair of these: http://digitalcameras.techfresh.net/covert-spy-camcorder-sunglasses/

“And here’s the even scarier part:

Returning to the bar I had time to order a pint when a policeman came in and demanded to see the photograph I had taken.”

how is that an even scarier part???? wasn’t a man just stabbed in the neck at the local shops???

He’s had bail refused. Or to be more accurate, he didn’t apply and it wasn’t offered.

Any photos of the Preacher preaching before he lost it?

A German, a rabbi and a Scotsman walked into a bar and the bartender said: “Is this some kind of joke?”

I know a little German.

He’s about 4 foot tall and lived in Munich.

nah, I don’t speak german. but apologies for using Godwin’s law (not Grech)

I heard their parties were killer…..

Their parties turn into a bit of a fizzer I hear ??

I never met aany of the senior heirachy of the Nazi party either, but generally don’t have too high an opinion of them

Really? What a pity! The Nazis were so good at making generalisations about certain ‘kinds’ of people. You’d have had so much to talk about at parties.

My particular incident was for the torch relay plane. I guess some sensitivity was understandable. Unfortunately for the AFP, the guy next to me was a serious planespotter who engaged them in a conversation about plane types, dates, histories etc.

That plane would be the one Harrison Ford was in right?