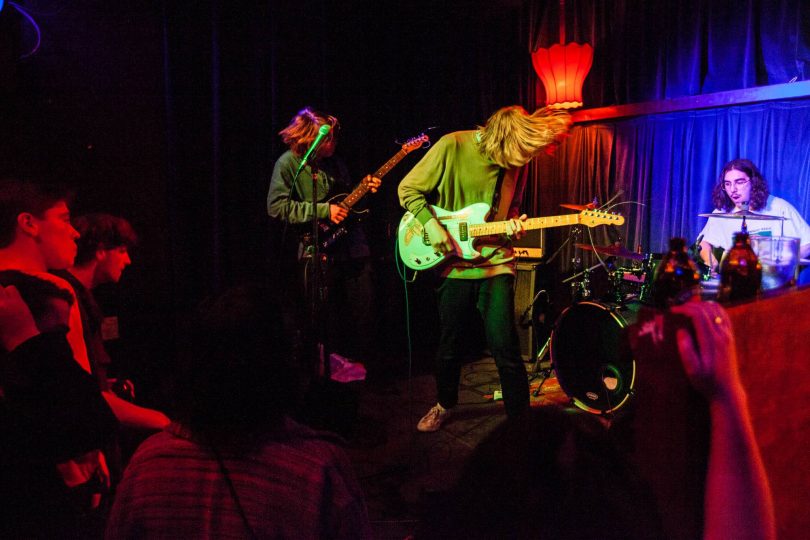 Marlon Bando are opening for Hoon on Friday at Lobrow Gallery and Bar from 8 pm. Photo: Adam Thomas.

Kickstarting the RiotACT Gig Guide for the 11th to the 17th of October is a photo by Adam Thomas of Marlon Bando, whose unreal brand of stoner and gritty rock riffs and tones put them in the pantheon of great guitar bands kicking round Canberra at the moment. Don’t believe me? Check out their EP here; ‘Tonne of Meat’ is my standout pick. They will opening for Hoon at Lobrow Gallery and Bar on Friday.

Halycon Drive will be playing at The Front Gallery and Cafe on Thursday as part of their ‘The Birds’ single tour, while over at Smith’s Peter Bibby will be touring his new single ‘Medicine’. On Friday, Psynonemous will be launching their album ‘Evolve’ on a night that promises to be very heavy on the metal, with Gods of Eden, Anno Domini and Hybrid Nightmares all entering the fray. Meanwhile, local folk legend Fred Smith will be launching his fresh new insights on American life with his double LP ‘Great’, which will be performed on Friday at Harmonie German Club from 8 pm.

On Saturday Space Party will be playing with the excellent, underrated Il Bruto at Smith’s Alternative, the King Hits will rage through the Phoenix with Royal Chant and DJ Bo Loserr, while over at Lobrow Gallery and Cafe Teen Jesus and the Jean Teasers will be headlining a huge line-up which includes Hopeless Youth Group, Dalmacia and Neon Highways. There’s too much more for me to get into here, just take a look below yourself!

@the_riotact @The_RiotACT
The hot #SouthCoast property market is continuing to break records with a home in #MossyPoint selling for $3.35 million https://t.co/J7yLYRfIGb (4 minutes ago)