Experts in buying, selling & renting
Your property, your future
1 October 2019 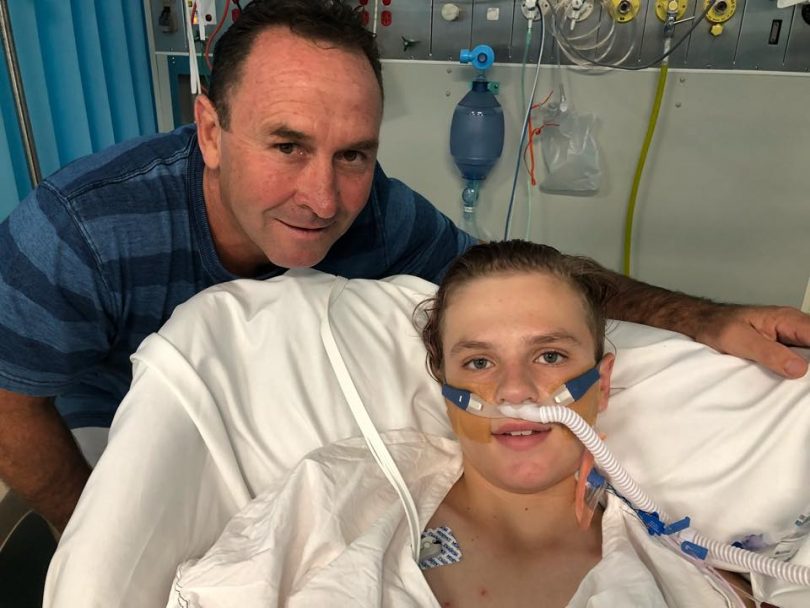 Proud Canberran Alanna Davis is a passionate supporter of the Brumbies, the Raiders, the Caps and the Cavs, and a champion for women’s equality and safety. But it wasn’t until tragedy struck two years ago that she understood the depth of our community’s spirit.

In December 2017, six days before Christmas, my son and I were involved in a multi-vehicle high-speed car crash. Five people were taken to hospital. My son, TJ, was airlifted to Canberra Hospital where he underwent emergency surgery.

He sustained fractured ribs, loss of his abdominal muscle, trauma and loss of part of his large intestines, damage to his teeth and a collapsed lung. TJ was resuscitated on the operating table.

TJ remained in ICU for eight days and has spent a lot of time in hospital. He has undergone five surgeries, three classified as urgent. TJ has spent countless hours in rehabilitation and recovery sessions.

He has a dedicated team around him. A psychologist, physiotherapists, physiologist, personal trainer, massage therapist, tutor, GP, nurses, surgeons, lawyers, hundreds of dedicated and amazing staff at The Canberra Hospital.

But the other group of people that can never be underestimated is our community. When times are tough, the Canberra community rallies. I remember sitting in hospital by TJ’s bed and a nurse handed me a block of chocolate and a card. A stranger had left it at reception for us.

I remember coming back to his room to find two Brumbies jerseys had been left by one of their junior players. I remember the countless strangers who posted to social media wearing their footy jerseys in a sign of support for my sick boy. 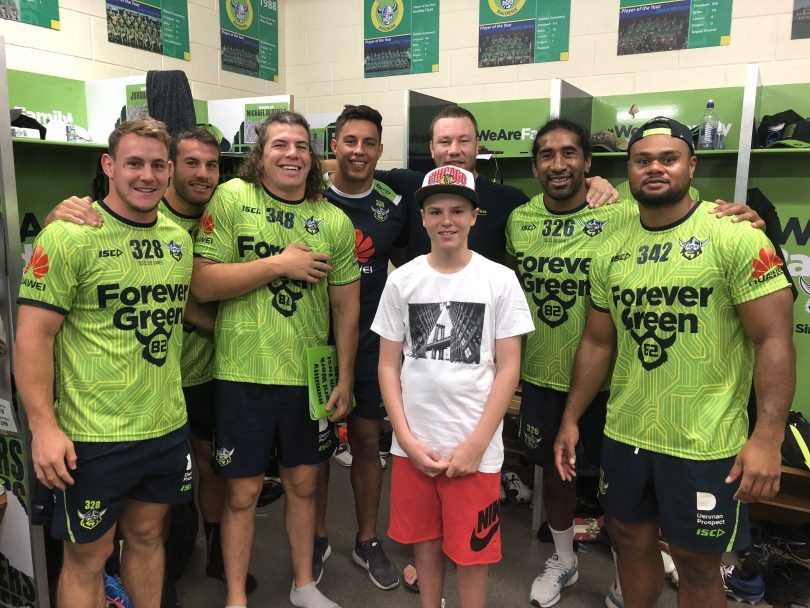 TJ with some of his heroes from the Raiders.

I remember Sam Williams and Jack Wighton of the Canberra Raiders visiting him. I remember Sam bending down and talking so softly to him. They left gifts for him and his cousins. I remember Ben Alexander of the Brumbies visiting and gifting TJ a very personal and irreplaceable Wallaby’s jersey. He spent ages with TJ.

The kindness of Sia Soliola of the Raiders and Andy Muirhead, Allan Alaalatoa and Scott Sio of the Brumbies and all they have done for TJ … I’ll never forget the countless times Christian Lealiifano of the Brumbies reached out to TJ, either by visiting, sending gifts, speaking on television or wearing his initials on his wrist band.

On Christmas morning while in ICU, battling massive pain and infection, missing out on spending Christmas like all normal 13-year-olds, TJ was visited by our leader. Our coach. Our local legend. Who visits a total stranger on Christmas morning in ICU, while not spending time with his own family? And brings gifts?

An incredibly kind and intimate visit. One that made TJ feel special. That reassured his recovery and desire to play professional footy. One that reminded all of us that Canberra, led by TJ’s sporting heroes, had his back. That if reality was going to mess with my boy, it was messing with our entire city.

The overwhelming support from our community helped TJ manage infections, life-threatening injuries, countless procedures and his current reality of unwellness. Those footy players created something for him to hold onto. Something that no medical professional can do. 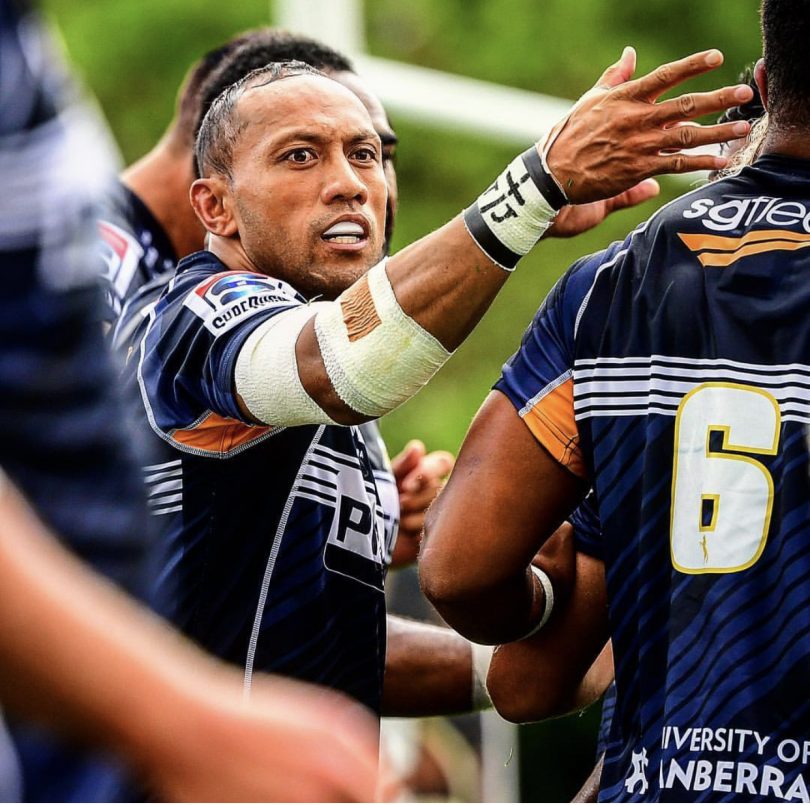 Christian Lealiifano wearing a wristband with TJ’s initials while playing for the Brumbies.

I’m proud to be a member of the Brumbies and the Raiders. I was a member before the crash but will stay a member for life now. I’m especially proud to be wearing the green stuff this week as I did as a child in 1989 and 1990 when Ricky Stuart was on the other side of the white line.

So, as we watch our Green Machine prepare for the game of their lives this week, I encourage you to reflect on all the things these clubs do for our community. Get out your colours, Canberra, and let’s show them we’ve got their backs. Let’s go boys!

This week, TJ has been announced as one of the Woden Westfield Local Heroes. He’ll receive a $10,000 grant for The Canberra Hospital Foundation. It will be used to educate more young people about risk-taking behaviour.

This is why you a goid person

Very moving story. I hope this brave young person is recovering well & this goes to show people living outside of Canberra that Canberra people do have a heart & we are so fortunate to have such caring sporting people representing our City. We are Raiders followers & will be cheering them on in the Grand Final on Sunday.💕🏉🏉🏉🏉

Rick is one of the most caring and compassionate people you would meet.

A beautiful testimony of strength, resilience and heartfelt community spirit.
Go the Raiders!!!

A very moving story. Good luck TJ and good luck to the Canberra Raiders this weekend.

What an incredibly moving story💕

Thank you for sharing your story and that of your son. Yes…..Canberra is a very caring city, enhanced by our fantastic sporting teams. Ricky Stuart has had his own family problems to deal with, so it is not surprising that he reaches out to others. A wonderful gesture to visit on Christmas day. I hope your son continues to improve, cheered on by the community.

Top kid with a heart and spirit most adults would be proud to have.

Our crews from Queanbeyan and Fire and Rescue NSW Station 236 Braidwood attended the scene of TJ’s accident in December 2017.

Glad to see you recovering so strongly mate. We don’t often get to see how people we attend to get on after the fact and everyone from FRNSW Queanbeyan and Braidwood are with you all the way legend.

Wow amazing story, thanks so much for sharing.

Ricky Stuart visiting on Christmas Day. What great work Raiders and other Canberrans are doing for the less fortunate in our great city.