The Waste Land by T.S. Eliot back by popular demand! 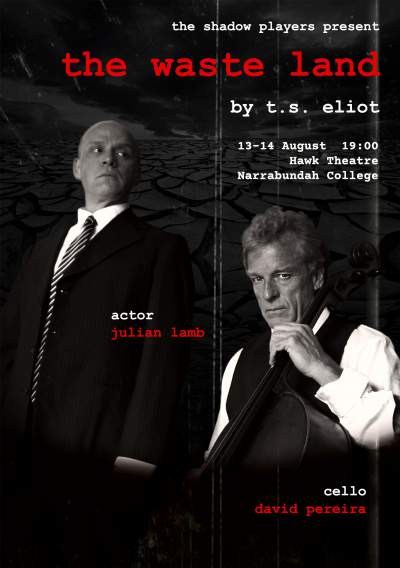 A dramatic performance of T.S. Eliot’s seminal poem, The Waste Land, with self-devised musical accompaniment, is back by popular demand for two nights only.

Performances of T.S. Eliot’s landmark poem, The Waste Land, are rare. A performance of The Waste Land with live musical accompaniment is almost unprecedented. Cellist David Pereira and actor Julian Lamb bring you a fusion of music and spoken word which will appeal to aficionados of the poem as well as those who have never encountered it.

Pereira and Lamb first performed The Waste Land together in Australia in December 2014 to sell-out audiences at Cloud 9 Cinema in Bright, Victoria, and Smith’s Alternative Bookshop in Canberra.

Pereira and Lamb have adapted and composed the music to fit specific passages in the poem such that the phrasing of the spoken words matches the phrasing of the music very precisely. The result is a seamless integration of text and music which brings clarity to the text, and which left audiences in Bright and Canberra spellbound.

The music features passages of improvisation and parody, as well as direct quotation from the work of some of the most important composers of the twentieth century, including Sibelius, Mahler, Shostakovich, and Schoenberg. Through this unique integration of music and poetry, Pereira and Lamb make the emotions of the text more vivid, its tensions more urgent, and its vision of a waste land yet more memorable.

As the review in The Age says, Pereira and Lamb “bring clarity” to this most difficult of poems. One of the aims in performing the poem in this unique way is to bring expose audiences to the most important and challenging poem of the twentieth century – which they might have never encountered, or whose difficulty might once have left them confused.

This piece will be of interest to students of English literature and drama, and also to music students.

David Pereira is an internationally renowned cellist, and is one of the most prolific and versatile cellists Australia has produced. Over the last 40 years David has been principle cellist for the Sydney Symphony Orchestra and for the Australian Chamber Orchestra, has produced recordings too numerous to list here of a variety of different kinds of music, and has won numerous awards including the City News Artist of the Year Award (2010). David is currently Artist in residence at the Canberra School of Music.

Julian Lamb has been teaching, directing and performing drama for 20 years both in Australia and in Hong Kong. He received his PhD from Cambridge University (2005) in English Renaissance pedagogy and poetics. Julian is Associate Professor at the Chinese University of Hong Kong where he teaches drama and English literature. He is artistic director of Shadow Players, an emerging local Hong Kong theatre group which has enjoyed two sell out season of their first two plays, Moliere’s The Learned Ladies and Gogol’s The Government Inspector (both performed at the Fringe Club).

So disappointed that I missed this! No-one’s fault but my own.

You’ll have to make your way to Hong Kong! 🙂

I’m sure it will be done in Canberra one day again when it is recognised as one of the most unique and sophisticated pieces of the theatre/music that Australia has produced in recent times.

So disappointed that I missed this! No-one’s fault but my own.