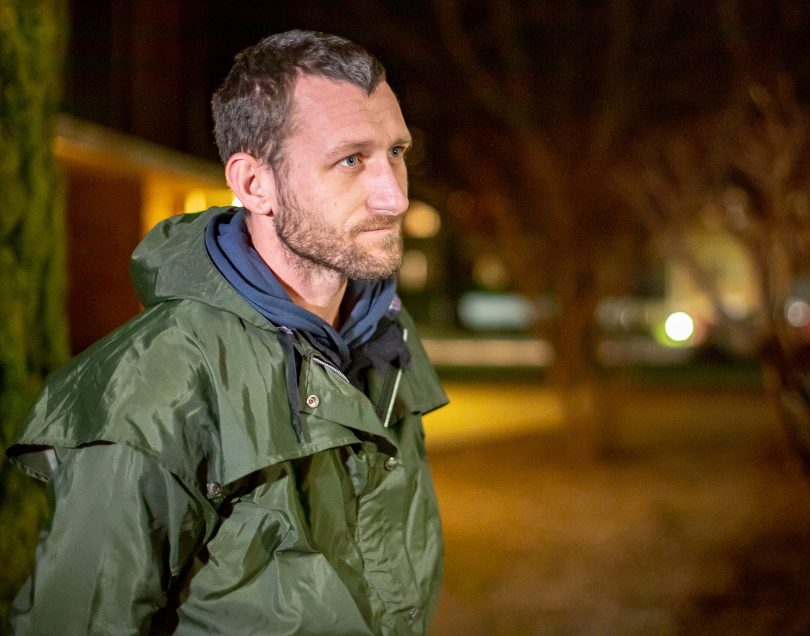 One of Safe Shelter’s guests during the winter. Photo: George Tsotsos.

A community organisation that puts homeless men up for the night has again called for more emergency shelter after shutting its doors over the weekend as its winter program came to an end.

Safe Shelter ACT, a combined churches and community project that provides emergency accommodation for homeless men in central Canberra, reported a more than a 70 per cent increase in ‘guest nights’ after extending the program for an extra three weeks this year.

Safe Shelter Coordinator Richard Griffiths believes that more needs to be done to get homeless people into same-night accommodation, with the ACT Government refusing to support similar programs due to a focus on initiatives that help people get into more permanent accommodation.

However, Mr Griffiths says this isn’t always possible, with people from all walks of life needing safe accommodation quickly.

“We get refugees, asylum seekers, some of the guys are sleeping rough, people who’ve been discharged from the hospital,” he says.

“Just recently we had a guy who was suffering severe mental health problems and the volunteers calmed him down and got him to sleep for the night.”

Safe Shelter is trying to focus on expanding the program across different suburban hubs in Canberra in a strategic effort to get more people off the streets.

“It’s not so much expanding the number of churches in the inner city because that would be confusing for anyone looking for shelter,” says Mr Griffith.

“What we’re looking at is trying to get a geographical spread, because there are homeless people in Tuggeranong, Gungahlin and Belconnen, and those with their lives in shopping trolleys and with dogs aren’t really good at travelling.”

Mr Griffiths insists that the Safe Shelter program and similar initiatives need support to provide safety to those who would otherwise sleep rough.

“Perhaps deliberately, [the ACT Government] mistakes us as the kind of Vinnie’s house in Woolloomooloo in Sydney with 200 beds that are virtually hostels with little cubicles that people can live in,” he says.

“We’re providing something slightly better than sleeping on the streets where they’re safe; they can sleep in a church hall and not run the risk of being kicked in the head at night.”

All Saints Ainslie, St Columba’s and the Salvation Army Canberra City Corps in Braddon provided their halls and heating at no cost so that one hall was open every night, with the shelters being full on more than a third of all nights. Twenty potential guests had to be turned away.

About 72 per cent of men stay at these temporary shelters for a week or less; however, of the 31 men who stayed for longer than seven nights, many stayed much longer on average than in previous years, “presumably because they could not find suitable, safe accommodation”, says Mr Griffiths.

Guest nights are increasing every year in the ACT.

The statistics show a sharp increase in numbers year on year. Safe Shelter recorded 1271 guest nights this year, up from 743 last year and 379 in 2017, and 134 in 2016. It rostered 134 volunteers to ensure that there were at least two volunteers overnight to supervise, and usually one more to help before lights out at 10:00 pm.

“They’re not safe on the streets and they can’t get anywhere off the streets,” Mr Griffith says.

“The 80 men who only stay for a week are the ones that have somewhere to stay or they go back to their families or they’re accepted back to their homes, but a lot of the ones who have just started jobs may stay with us for two or three weeks while they find accommodation.

“If you start a job on Monday and find how expensive Canberra housing is, for a single guy that can be up to $200 a week, and it takes some time to save that money.”

“Group houses take two to three weeks at least, and most don’t have beds so they won’t advertise unless they need someone, while youth hostels normally have a 14-night limit.”

This year the churches agreed that up to nine, instead of eight, homeless men, referred to as guests, could be accommodated each night, with the larger halls permitting a 10th, subject to agreement with that night’s volunteers.

An expansion of the program isn’t as easy as it seems. Finding volunteers to sign up for 12 months at a time is a tough ask and induction programs for new volunteers take time and resources.

“The other problem is that churches need to be prepared to hand over their halls for two to three nights a week, obviously they have other events on,” Mr Griffiths says.

“At the moment it’s not even in the planning stages for next year, just in the discussion stages.”

No basic housing for the homeless, yet luxury eco lodges in the arboretum are a thing. The people’s republic of Canberra? Ya dreaming.