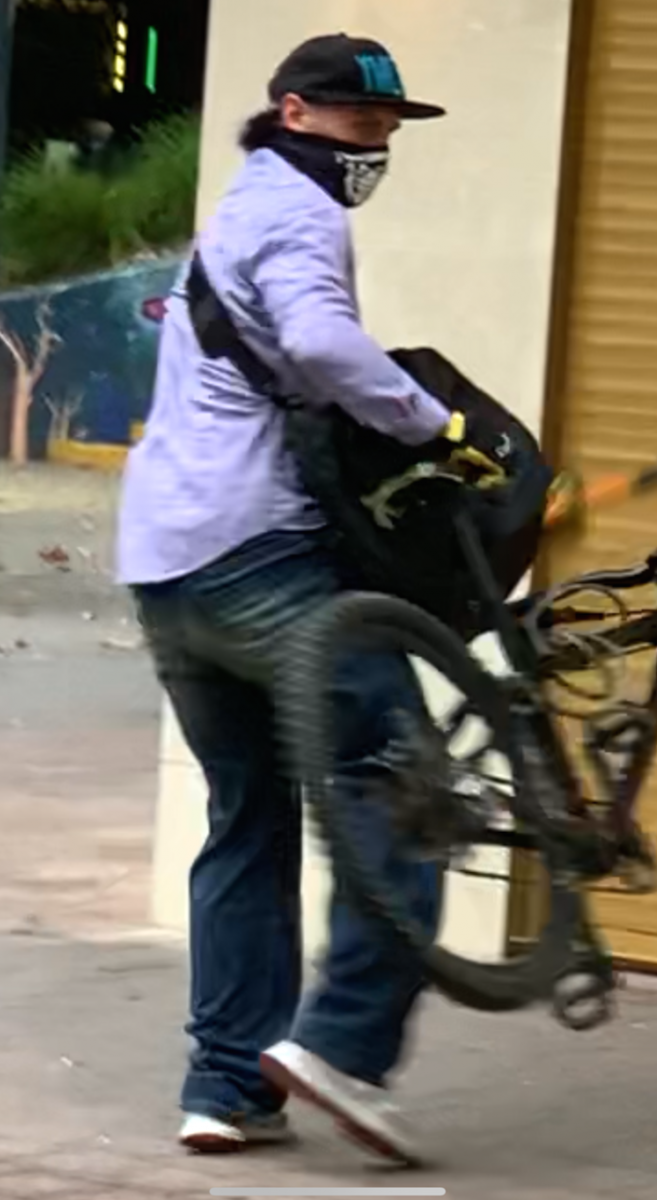 An image of the man suspected of an attempted robbery at McGlades Jewellers in Civic on Saturday. Photo: Supplied.

A brazen thief has made two unsuccessful attempts to rob a jewellery store in Civic in broad daylight on Saturday.

The thief remains on the run and can be seen on the store’s security cameras attempting to rob the store by smashing the window of McGlades Jewellers on City Walk.

The first attempt occurred at about 10:15 am on Saturday (15 February) when the man tried to smash the store’s window with a hammer. Police were called immediately after the first attempted robbery.

Store owner Jenny Brogan said police began their investigations and told her it was unlikely the man would return.

However, the man returned again later in the day at about 3:30 pm, this time with an axe.

The store’s security footage shows the man on a BMX bicycle repeatedly hitting the store’s shatterproof glass where the store’s jewellery displays were located.

Footage of attempted robbery of jewellery shop in Civic

CCTV has caught an axe-wielding thief trying to smash in the security glass window of city jeweller McGlades in broad daylight last Saturday. Police say the man failed at his first attempt and then returned with a hammer. Full story: http://ow.ly/nTUm50ypVhx

On both occasions the man was unsuccessful and was chased away by members of the public. On the second occasion, a customer and the store owner confronted the man who shouted at them, “Get back, I’ve got an axe”.

The man tried to ride off but dropped his bike before fleeing on foot through Myers.

The attempted robberies have been reported to police who have security footage and images of the man. Their investigations are ongoing.

Stores owners Jenny, Ben and Angie Brogan and staff members have been left very frightened by the attempted robberies. They have now employed a security guard to watch the shop while they wait for specialised glass to be made and fitted.

A customer in the store fled to a back room to evade the would-be robber.

“We think there were a lot of witnesses on City Walk on Saturday who started filming the man, so we’ve managed to get a good look at him,” Jenny Brogan told Region Media.

“Ultimately, our aim is to catch this guy and prosecute him as we think he absolutely has to be caught. He just can’t terrorise people like this.

“It was in the middle of the day, twice, on a Saturday with lots of shoppers about, so that’s why we’re hoping people will recognise him or come forward with information.”

Mrs Brogan said the man’s bike, which is believed to have been stolen, has been handed to police for forensic testing.

The man was wearing a blue shirt, a black hat with the letters YMCMB on it, blue jeans, a black face mask and white shoes with red laces. He was also carrying a side bag (brand Under Armour).

In June 2018, the owners of the store reopened its current location. This is the first time they have had to deal with a robbery.

“We just want this guy to be caught,” Mrs Brogan said. “Our team was very frightened and we’ve offered them counselling and support, but they’re all doing well and I’m very proud of them.

“Although two of our shutters are down and two of our windows are smashed, we are open and will stay open. We are very grateful to those of you who helped us. Thank you so much,” Mrs Brogan said.

whatwik - 54 minutes ago
There's certainly a nuclear reaction from the usual suspects here any time renewables are mentioned. View
Futureproof - 2 hours ago
Nuclear - the Greens say no New hydro dams - the Greens say no Windfarms in remote areas - Bob Brown says no... View
nobody - 2 hours ago
According to the World Nuclear Association, in April 2020 there were 440 operating nuclear power reactors around the world, 5... View
Community 8

whatwik - 59 minutes ago
Hope they were able to find their own towel (not to mention undies) more easily than this lot - https://www.abc.net.au/news/2... View
Community 47

David Keir - 1 hour ago
Virginia Loizou sounds like you’re the one whinging champ View
Virginia Loizou - 2 hours ago
David Keir funny this isn’t a pie. You don’t get less because they make something specific for women to feel safer around... View
Louise Trott - 3 hours ago
Mark Heinrich Well said. An intelligent response. View
Property 26

Futureproof - 2 hours ago
I ride my bike around LBG every weekend. Often I have to pull off to the left when the lycra crowd are riding two abreast, ba... View
James Forge - 3 hours ago
Warwick Bradly I work along there. I don’t think it an inconvenience I just wonder about these peoples regard for their own... View
Warwick Bradly - 3 hours ago
I've driven that road many, many times. I don't think I can ever remember a cyclist on there, or if there was, it can't have... View
Breaking 3

Daniel Duncan - 7 hours ago
May as well rush the robot work force in as no business will be able to run long term. Next you will want a UBI.. View
show more show less
*Results are based on activity within last 7 days

The Canberra Liberals have lambasted the ACT Government for focusing on issues that don't affect Canberrans and trying to turn...
Community 25

@The_RiotACT @The_RiotACT
Archie Tsirimokos is one of the ACT's top legal professionals and chair of the Canberra Business Chamber, but there's more to him than meets the eye https://t.co/BtjpRtpks0 (2 hours ago)