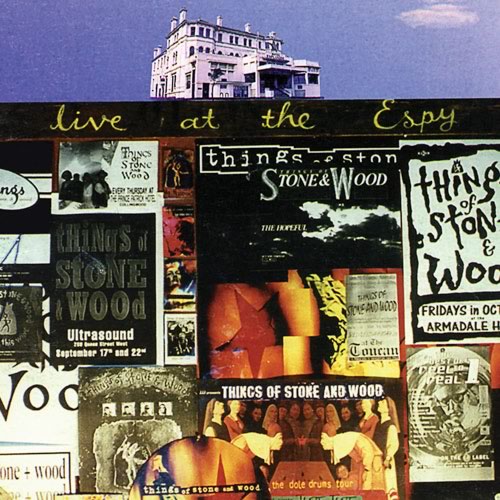 Live at the Espy – (Rondor Music)

Things of Stone and Wood raised their heads into Australian musical mainstream during 1992/93 with a hit that resonates today for its passion, honesty and beauty.

Happy Birthday Helen, penned by about the woman lead singer Greg Arnold is still with today, is a landmark song. The kind many a band hopes to produce. It certainly helped raise Things of Stone and Wood to some deserved commercial attention. To celebrate their 25th anniversary, the band have headed out to tour again, and re-released a well worthwhile recording of a set played at Melbourne’s Esplanade Hotel back on 23 December, 1995.

Simply called Live at the Espy, this anniversary edition works amazingly well as a time capsule, transporting you back into a specific point in the band’s life. There is a freshness to the energy, and a polish to the sound. This is clearly an outfit who shine in the live format, with the arrangements executed with deftness and precision. It is awe inspiring to sit back and soak in Arnold’s guitar as it simmers and flows, while Justin Brady’s often present violin and harmonica sweep through the set, vital components to the band’s charismatic rock/folk sound.

Recorded in Espy’s Front Bar, the quality of the mix is superb. “There’s no post production or pro-tools trickery here,” read the liner notes written by Arnold. “It is an authentic glimpse at another time. There’s a bit of chaos and there’s lots of loving good vibrations.”

This just about says it all really.  You are able to press play, sit back and let your self be entertained.

Well into loving the good things in life, Arne Sjostedt is a seasoned journalist with a background in music and the arts.

Regarding Angie, she was recently involved in a very interesting project called Holidays on Ice. Here are some words I wrote on the album. Well worth checking out if you are into that kind of thing.

If Frente came on the radio I would turn it off. The only person I would do that for is Casey Chambers.

Looking very quickly at that newer video posted here, she now seems to have dropped the cutesy American accent in exchange for singing in an over-emphasised Australian accent. Same as Missy Higgins did. Just results in the singer sounding like Dick Van Dyck in Chitty Chitty Bang Bang.

Who didn’t like Frente ? Me. That woman’s voice was nauseating.

They didn’t have any other hits after that and I thought they had broken up.

Apart from the first two singles from their next album charting higher than Share This Wine.

Unless you’re talking about Frente – those guys did alright for themselves. And now Ange Hart is the cliched Big In Japan! .. I did like their “Lonely” EP. That, and and listening to bands live in the Front Bar of the Espy. And the Gershwin Room. .. Good Times!

it reminded me of that other campy song at the time Accidentally Kelly Street.

Funny, I remember it as Accidently Was Released.

I didn’t like Happy Birthday Helen, it reminded me of that other campy song at the time Accidentally Kelly Street. They didn’t have any other hits after that and I thought they had broken up.

Hey, I really liked Frente! I’ll have to go and dig out their CD now you’re reminded me of them.

Are they still going? They are famous for releasing the only song written about the first Gulf War in 1991 – Share This Wine – which they premiered on Hey Hey It’s Saturday. I didn’t like Happy Birthday Helen, it reminded me of that other campy song at the time Accidentally Kelly Street. They didn’t have any other hits after that and I thought they had broken up.

Rob Tomsen - 9 hours ago
Let’s just stop summer 😂😂😂😂😂 View
Ray Ez - 9 hours ago
Awesome! So Wuhan flu is irrelevant and climate change is the devil! Keep up the laughs! View
Carole Ford - 9 hours ago
There are probably millions of deaths a year that can be attributed to air/water pollution, this pollution is cumulative and... View
News 41

Sue McIntosh - 12 hours ago
Angela Moore thank you for this beautiful poem. View
Angela Moore - 12 hours ago
"The Poplars" The Poplars are fell'd, farewell to the shade And the whispering sound of the cool colonnade. The winds play no... View
Sue McIntosh - 17 hours ago
Ho hum, what else is new? More trees given the chop. If council is so worried about the trees falling, then they should be re... View
News 10

@The_RiotACT @The_RiotACT
St Benedict’s in Queanbeyan has been helping locals for more than 15 years, offering meals, friendship, advocacy & support to those who need it most https://t.co/l22RO7R84o (17 minutes ago)