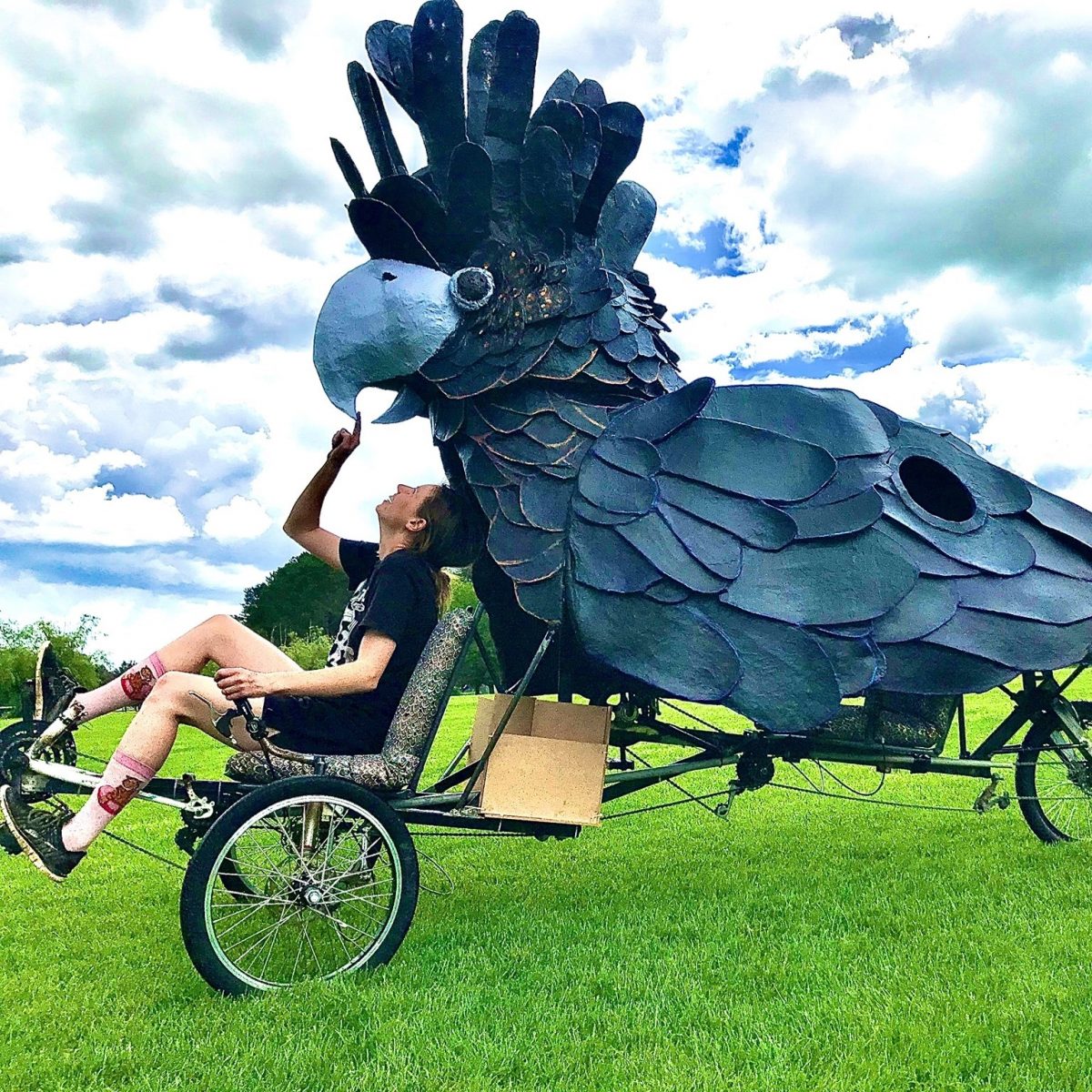 It’s a race across land and sea, setting off from Haig Park in Braddon and ending on the other side of Lake Burley Griffin. And the thing that will see the competitors through it all? Aptitude with a welder.

A ‘kinetic sculpture’ is an art form where movement forms part of the display. Think of the orange-bladed ‘windmill’ near Woden or Journeys in front of the Canberra Airport, as examples. But in the case of this race, it’s an amphibious, human-powered vehicle usually crafted around a tricycle from bits of scrap.

Constance Titterton and Travis Bullock are the locals behind the inaugural Canberra Kinetic Sculpture Race on Saturday, 22 October. They describe it as a competition across the fields of art, engineering, speed, and pageantry, but the most critical component is simply “making people go ‘wow'”.

“We do it for glory,” Constance says.

“There’s no reward and no financial gain. It’s literally just about the joy of doing something difficult and making friends along the way.”

The practice of building art in a shed and racing the finished product in an all-terrain quest for glory is nothing new. It’s a worldwide phenomenon, with its own name – ‘Triathlon of the Art World’.

“The history of kinetic sculpture racing hails from northern California 50 years ago when artist and visionary Hobart Brown modified his child’s tricycle and challenged his neighbour to a race down the main street,” Travis explains. 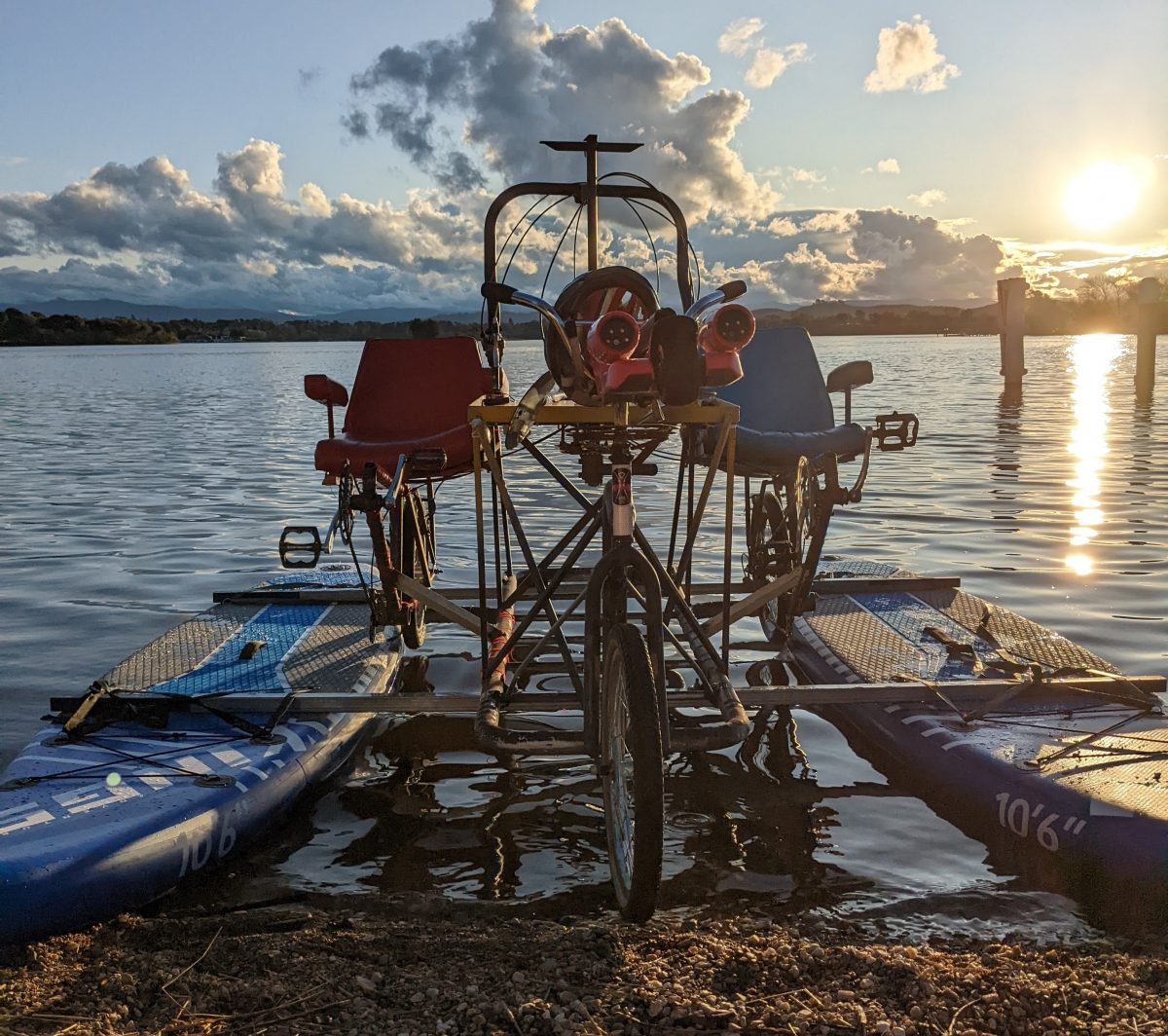 Travis grew up in California, watching the races as a child before joining them in high school. Constance met him a few years later when she was studying in the state on an exchange arrangement.

“He invited me to the kinetic race in his hometown, and I went, and now, 10 years later, we’re married with children.”

The couple’s first attempt on this side of the Pacific took the form of a lionfish for the Wind on Water Festival in Western Australia.

“It was made out of recycled aluminium sheeting that created this sparkly fish-skin look, with recycled foam fins sticking out,” Constance says.

“These fins would flap as we rode along, and kids could sit on the front bench seat and look out through the mouth that also opened and closed.”

Nowadays, the couple has made a local name for themselves with their giant snail and black cockatoo kinetic sculptures; both built from materials stumbled upon at The Green Shed.

“We found a stack of old computer chair mats once and these became the big translucent shell for our snail,” Constance says.

This, combined with a metal frame, pulleys and levers, shows how much engineering goes into one of these sculptures.

“We spent about two months making the cockatoo, but it can be as simple as modifying a bicycle with floats or foam so it can go on water,” Constance says.

“Because it’s so diverse, it appeals to everyone – kids, adults and everyone in between,” Travis adds.

“If you’re an engineer, you’ll love the challenge of creating a machine out of scrap parts. You also have to make it float, which drives people’s creative engineering side, but you also want it to be a beautiful piece of art, so there’s another whole side of interest.”

The reactions make it all worthwhile.

“Every kid wants to pop their head inside and see the mechanisms at work, make the cockatoo’s head squawk or the snail’s head rotate and so on,” Constance adds.

“It’s very easy to share the love when you have one out on the streets.” 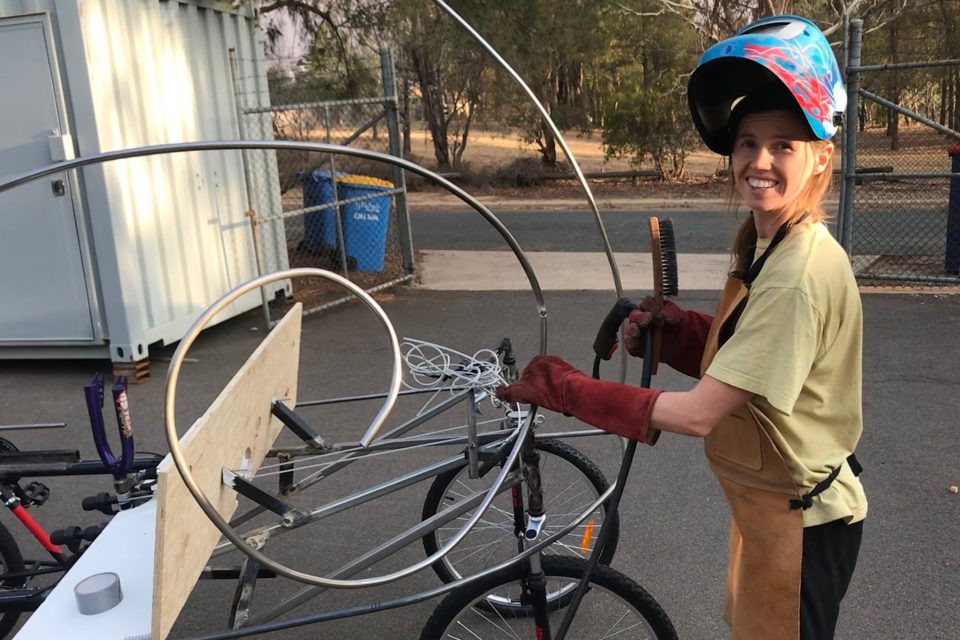 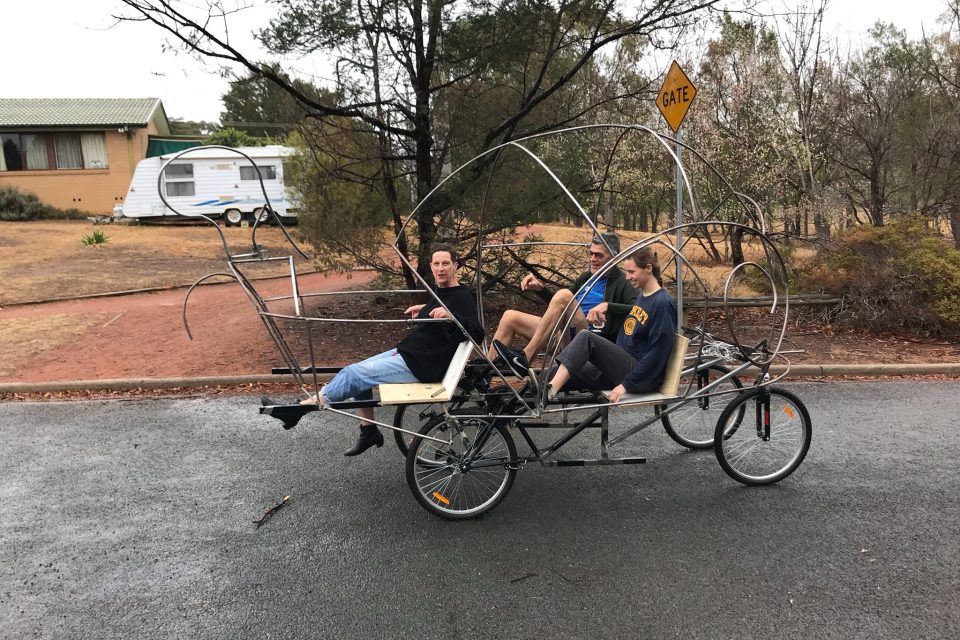 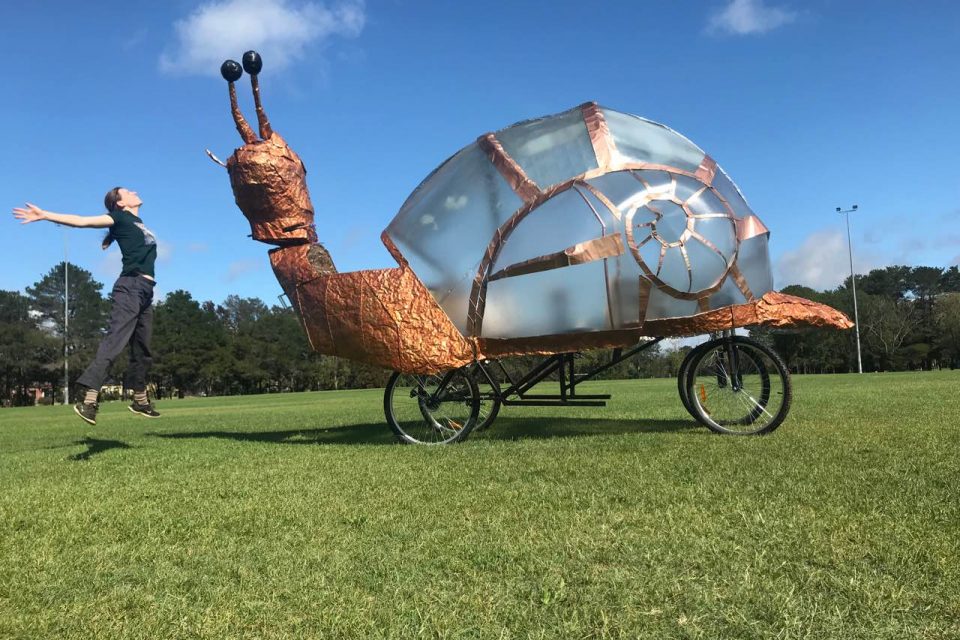 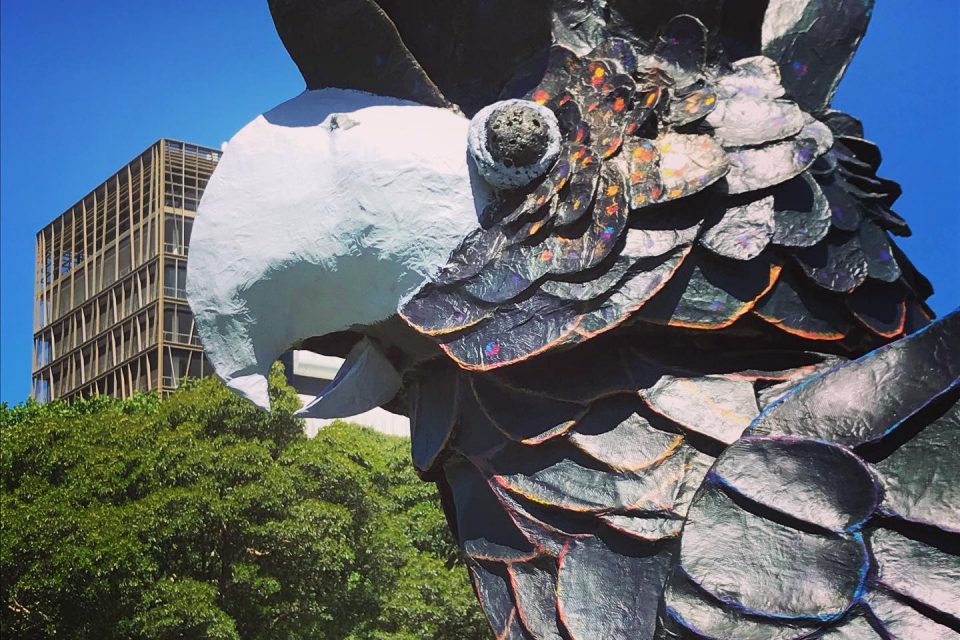 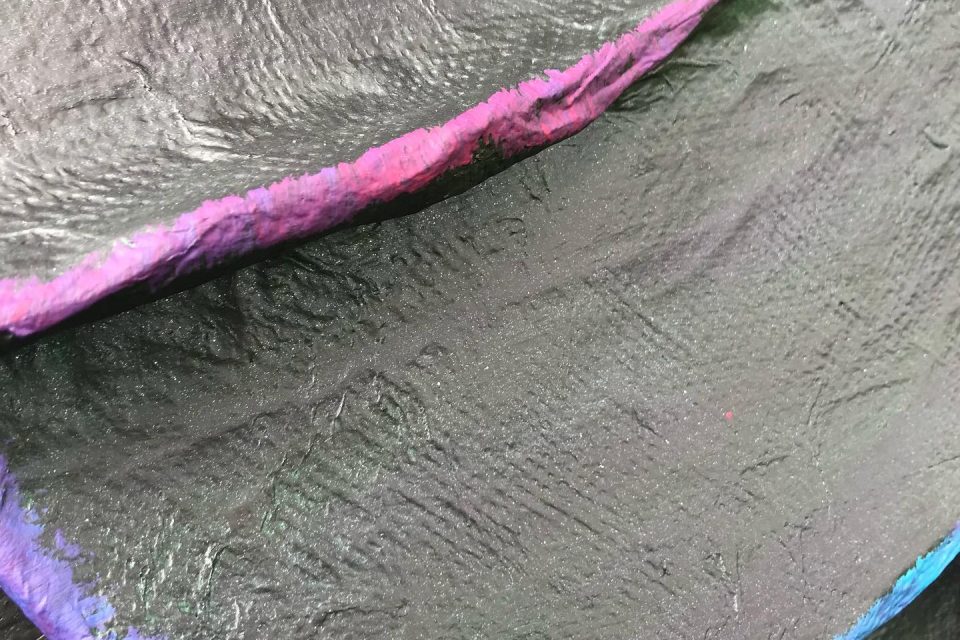 Close up of the cockatoo's 'feathers'. 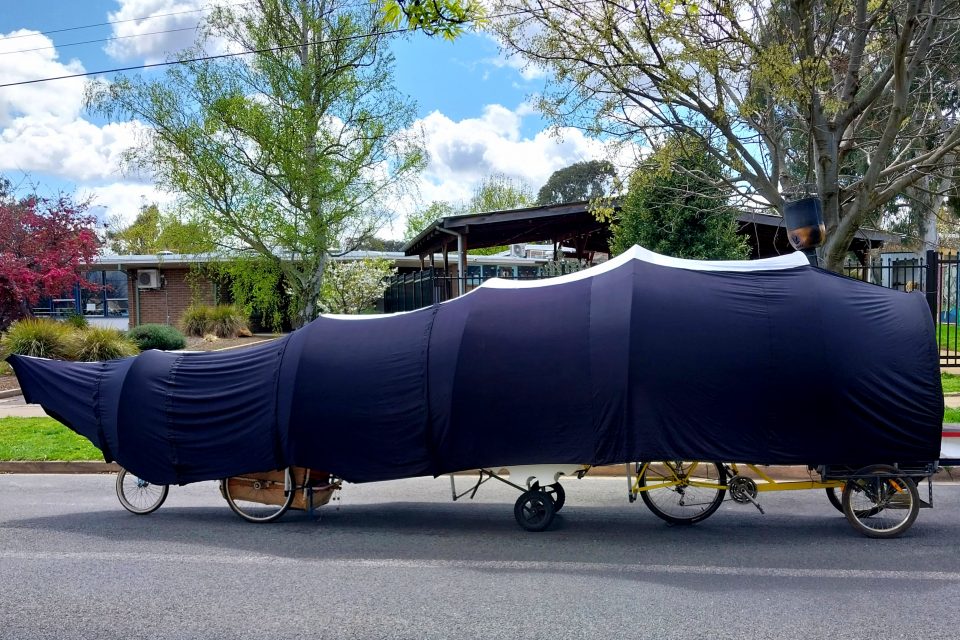 That’s precisely what they’ll be doing come 22 October. So far, 15 teams have signed up to the inaugural race, translating to about 50 people.

The machines will be on display from 10 am at Haig Park before setting off on parade from Lonsdale Street to Lake Burley Griffin from 12 pm to 2 pm, past Glebe Park. The ‘Sand Challenge’ kicks off at 3 pm at the National Carillon on Queen Elizabeth II Island.

“We really encourage everyone to get out and about on the day … and watch the machines set off on their adventures,” Constance says.

Find out more at the Canberra Kinetic Sculpture Race or the Facebook event listing.

Tim Johnson – we should go! I have great memories with f Constance and Travis and the snail next door!

We’d love to see you all at the race! You can find out more information at the fb page: https://fb.me/e/3Kctn0Osi

Art and racing, a compelling combo!