Thousands of Canberra tenants have accumulated COVID-19 rent debts and face the possibility of eviction, according to a new analysis.

Tenant lobby group Better Renting calculates that between 5 and 15 per cent of renters (or around 5,000 to 16,000 Canberrans) could be at risk of COVID-related evictions, and is calling for governments to act to avert an epidemic of homelessness.

Tenants who lost jobs or income due to the pandemic income may have been able to negotiate deferred rent with their landlords but any deferred rent has been accumulating as debt.

Executive director of Better Renting Joel Dignam said that across the country up to 973,000 people could face eviction due to COVID-related rental debt if debts are not cleared before eviction moratoriums are lifted. 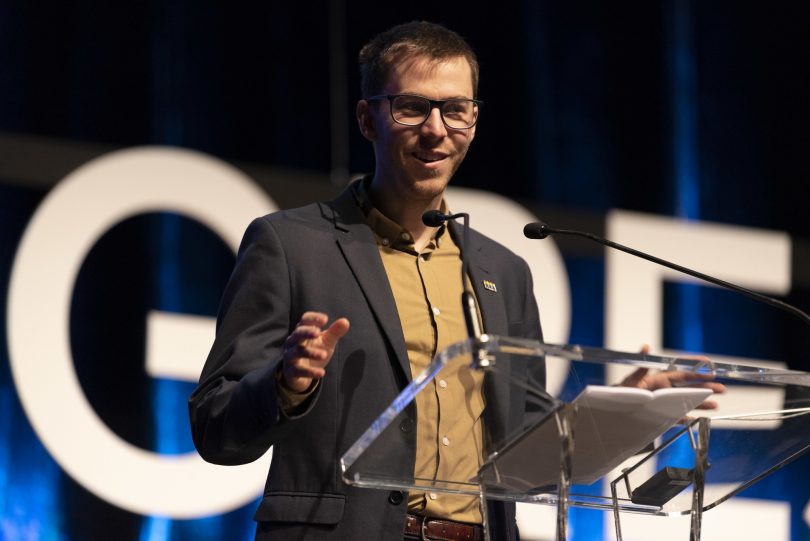 Joel Dignam from Better Renting says many renters could be at risk as eviction moratoriums are lifted across Australia. Photo: Supplied.

Better Renting is calling for governments to acquire rental debts from landlords at a fraction of the base value and write it off to free tenants from the risk of eviction.

It reviewed data on rental negotiations to estimate how many renters could be at risk as eviction moratoriums are lifted across Australia.

The report also identifies renters with “debt in the mailbox” who have avoided rental debt only by going into other forms of debt, such as credit card debt, and those who may go into debt as they run out of savings and face cuts to income support.

Mr Dignam said many renters had lower incomes to start with, and tended to work in the hardest hit industries, such as hospitality, the arts and recreation.

”With incoming cuts to income support, many of these people will be pushed into poverty,” he said. ”Renters were already struggling with housing costs, and this crisis has driven people to the edge.”

He said governments had a responsibility to help people stay in their homes and they needed to work together to do this.

The alternative was to see these people out on the street and an increase in homelessness that could have a worse impact on then community, he said.

Mr Dignam said Better Renting had not calculated the amount of rental debt that has accumulated, but believed state and territory governments would need to administer any relief program with Commonwealth funding.

”Governments could do a lot more to understand the shape of this problem and the different sorts of debt that people are in. This would be a first step towards dealing with it,” he said.

Mr Dignam said it would also generate cash flow for landlords, who would otherwise not see any rent paid if tenants were evicted.

He said the banks had provided only minimal support for home owners and were still charging interest during the mortgage holidays.

”The banks should come to the party so landlords don’t have to squeeze tenants so much,” he said.

Asked whether governments would take the call to cancel tenants’ debts seriously, Mr Dignam said these were exceptional times and no one would have predicted the extent to which governments had gone during the pandemic to keep people safe and protect the economy.

”Early this year no one could have imagined the Commonwealth Government would double income support as we saw happen with the coronavirus supplement and JobSeeker,” he said.

”We’ve seen pretty bold steps from government to keep the community safe, and it’s hard for me to imagine governments would sit back when they see this risk of people losing their homes and potential homelessness,” he said.

So many people have previously commented that rent cannot go up in Canberra. Really?

I think these “stats” have been exaggerated to say the least and renters or anyone for that matter cannot keep relying on the Government handouts. If you’re in an industry that’s been hit like hospitality or the arts, its time to get another job to get you by.
Our agency had less than 6 reduced rents from a portfolio of 900+ tenancies so the figures of 5000 – 16000 has to be grossly inflated.
All owners have been forthcoming for tenants in genuine hardship and the dialogues been productive for all parties.

I think this is a great idea, as long as the government reimburses anyone who used Super to pay the rent when losing hours or jobs.
It must be fair.

You can’t continue to socialise these losses, it’s time for both renters and landlords to stand on their own two feet.

People who racked up rental debts shouldn’t be rewarded for doing so.

Where are the stats coming from?

Ash Claire it says at the start of the article:
“Tenant lobby group Better Renting calculates…..”

Yes, and I want to know where they get their stats from

Ash Claire common sense should tell you this is correct.

Ash Claire dont you know anybody who has had problems with being able to afford to pay their rent.

Dan Rayner you love it don’t you

Katie I had so much practice with you 😂😂😂