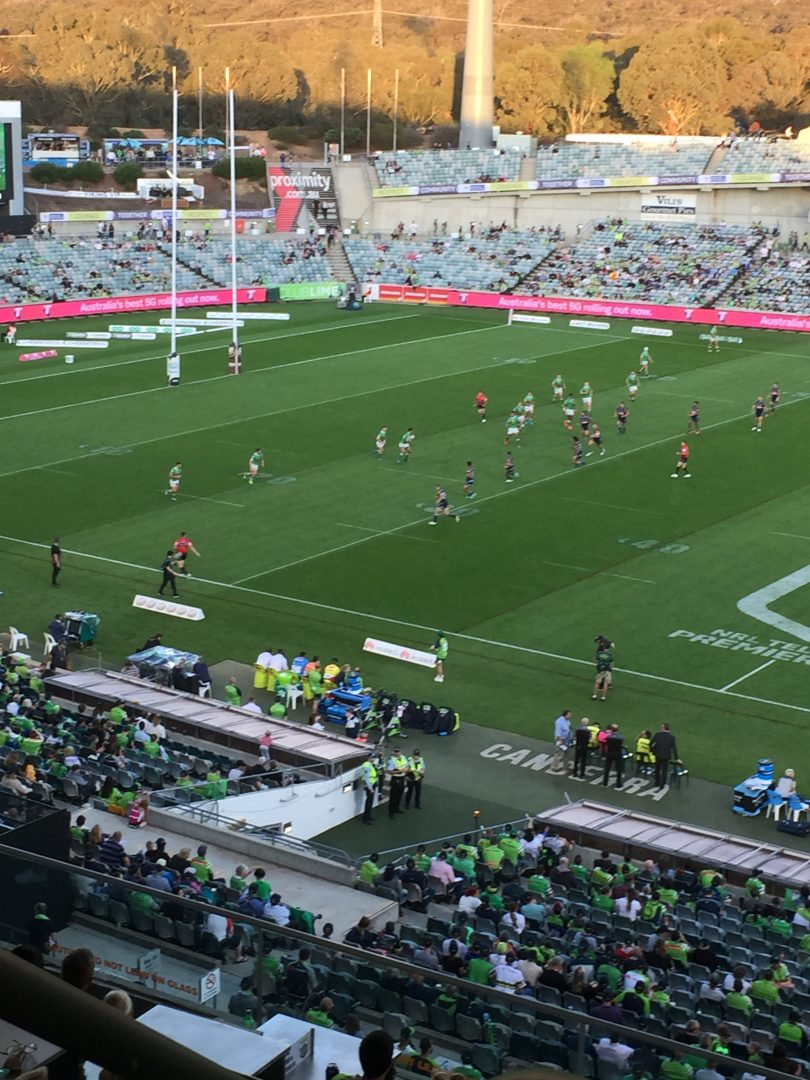 Will the Raiders return as anticipated on 28 May? Photo: Jennifer Andrew.

The NRL has gone through plenty to get to this stage of a return to competition on May 28, which appeared remote when it was first forecast.

Few could have imagined it would have included questions about whether the League could mandate flu vaccinations for players, but that’s exactly the dilemma they face this week

The NRL has had to jump over plenty of hurdles, including many in the community questioning why they should be allowed to train and play when the rest of society is in isolation.

There were also robust negotiations between Channel 9 and the NRL over broadcast fees with the likelihood that finances will be tighter than ever before.

State and federal health authorities had to be convinced that every biosecurity protocol was put in place before the players are allowed to return to training, let alone playing.

This included testing players’ temperatures before each training session.

Another biosecurity protocol was the requirement for players to have a flu vaccination or sign a vaccination waiver.

It’s understood that three Raiders players opted against having a flu shot and crossed out the line in the waiver that stated they are at greater risk of getting the flu if they are not vaccinated. This action was reportedly taken by the players for cultural reasons.

Gold Coast forward Bryce Cartwright is also believed to have crossed out the line on the waiver, although reasons for refusing the vaccine may differ among players.

The NRL says that players who refused vaccinations will be dealt with on a case-by-case basis in consultation with their club and medical staff.

This is not the place to discuss scientific, ethical, religious and cultural understandings, beliefs and knowledge surrounding vaccinations. That would take longer than this article and there are others far more qualified to bring substance to that debate.

But it does create a predicament for the NRL and one that they perhaps did not expect.

The three Raiders players; Sia Soliola, Joe Tapine, and Josh Papalii, didn’t train yesterday but were back with the team today. They are understood to have the support of their team mates.

There are a number of players at other clubs adopting a similar stance although it is understood that around 97 per cent of players have opted to get the flu vaccination.

A battle with players over flu shots is possibly the last thing the NRL could have anticipated as they were going through various stages in preparing for a return.

Whether it impacts on the proposed start of the NRL season on 28 May remains to be seen.

In the end, all parties may be satisfied with 97 per cent of players being vaccinated.

CLooey - 46 minutes ago
Yes please, I think this is a great idea to achieve a healthy work and home life balance. Not sure if it’s possible though... View
bikhet - 51 minutes ago
"Pretty sure teachers won't be working a four day week." Why not? They only work part-time now.... View
Steve Hambridge - 2 hours ago
What, *every* week?! View
Opinion 31

@The_RiotACT @The_RiotACT
Van Gogh has proven once again to be an unbeatable crowd-pleaser in Canberra. And some young local artists were even inspired to create their own Sunflower-inspired masterpieces https://t.co/pdFL3jtLXi (38 minutes ago)