If you like your iron big and local (and really who doesn’t) then this video posted by NCINationalFacility is for you:

The Fujitsu Primergy cluster high-performance supercomputer was constructed at the National Computational Infrastructure in late 2012. Located at The Australian National University, the machine has:

Debuting at #24 on the world in the Top500 list of best supercomputers, the HPC is constructed based on the technology developed for the ‘K’ computer in Japan, which was until recently the world’s fastest computer.

NCI’s advanced computing infrastructure is funded through programs of the Department of Industry, Innovation, Science, Research and Tertiary Education, while its operations are sustained through the substantial co-investment by a number of partner organisations including ANU, CSIRO, the Australian Bureau of Meteorology, Geoscience Australia, a number of Australia’s research-intensive universities, and the Australian Research Council.

Fujitsu is the world’s third largest IT Services Company, and has over 40 years of history in developing Supercomputing technology. 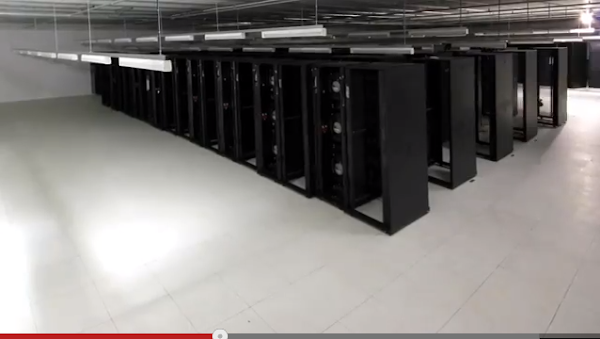 Either you’re actually thinking of Lenovo… or your IBM Desktop will be ancient!

Also, +1 for comments about shame we didn’t see subfloor being built. Also, the timelapse movie looks like it’s 10fps of photos taken every minute or so – that’s a bit lazy. It would have been nicer to see, say, full 25fps from a lot more frequent capture blurred in.. hope they didn’t pay the guys who made it much money!

10 years time this computer will fit in your laptop

I don’t quite know about laptop, but did a comparison of my current work computer vs my one of 10 years ago. Yeah it’s memory capacity is roughly 32,000 times more, my hard drive capacity is roughly 1000 time more, so it’s very conceivable that this entire room will fit on my desk within 10 years…

Of course that fact doesn’t make this system any less cool.

btw I should say that I was referring to CRAY inc – The Supercomputer Company. (their motto, power phrase or whatever).
Not IBM.
cheers

Call that a server room? Where’s the piles of boxes/pallets/shit? And the mountain of empty energy drinks and chip packets?

absotively! give me apples or give me death. but no, they give me eye bee em clones, bleugh…

I think it is pretty clear that it will be used for research. Just read the second last paragraph of the OP again.

And who is “the” supercomputing company? IBM? Might I remind you that Fujitsu had the world’s largest supercomputer in the top 500 list from June 2011 to June 2012. They also have some of the most efficient computers on the list.

The question isn’t who’s number 1 to any sane buyer.

It’s who can deliver the needed capability, and at what cost.

Paying a premium to run with the herd is a mug’s game.

I think it is pretty clear that it will be used for research. Just read the second last paragraph of the OP again.

And who is “the” supercomputing company? IBM? Might I remind you that Fujitsu had the world’s largest supercomputer in the top 500 list from June 2011 to June 2012. They also have some of the most efficient computers on the list.

Possibly because, if it’s like their service offerings, it would be reminiscent of the collected and aggregated remains of a top 10 coprophiles collections.

Big deal, it didn’t show the construction of the floor, the running of all the 3 phase power supply cabling, the 48volt DC supply cabling, the backup UPS systems, the myriad of data cables and fiber that actually take all the information to and from the “super computer” that actually make it perform any purpose whatsoever, or the air conditioning system that keeps all this equipment running at operating temperature “roughly 23 degrees??”.
This is like watching a TV show where they rebuild a 350 Chev engine and leave it on an engine stand.
Boring!!!!

(IMHO after spending the last 20 years in there)

10 years time this computer will fit in your laptop

TIL there are companies that do time-lapses.

Mate…MATE, check out the racks on that one!

Jacq Miller - 1 hour ago
shame there are no longer all 4 in situ View
Barry Matson - 4 hours ago
of what? View
Michael Guina - 4 hours ago
It has to start somewhere and those two buildings are living example . View
Opinion 80

bj_ACT - 15 hours ago
Yes razor it’s a good point. Agree there are pockets of Tuggeranong and Belconnen that could do with some ACT government do... View
mattm - 16 hours ago
There are almost 130 Councils in NSW, and most of them do a much better job with municipal services than the ACT Government.... View
Heavs - 17 hours ago
Competent councils - like this one? https://www.canberratimes.com.au/story/6978805/nsw-central-coast-council-to-be-sacked/ Or... View
Community 1