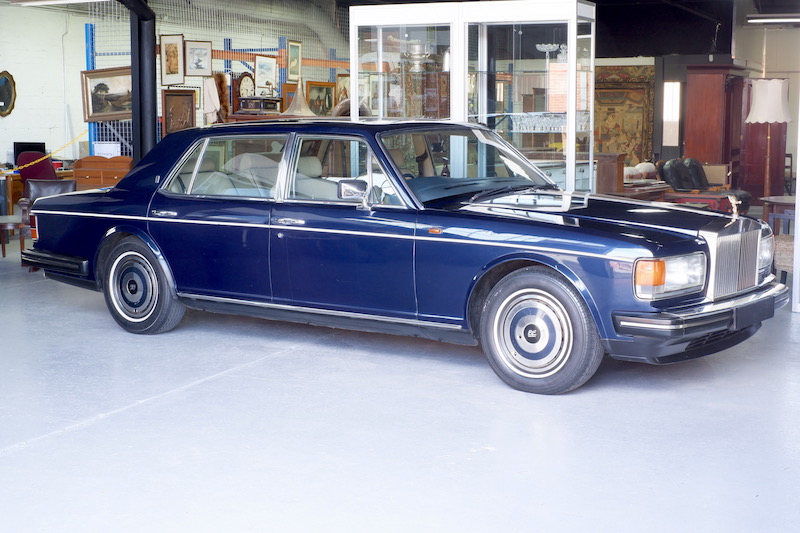 The 1988 Rolls Royce. With 56,000 kilometres on the clock, it is an opportunity to own a motoring legend. Photos: Rob Evans.

Sinking into the creamy leather back seat of a Rolls Royce, Rob Evans searches for a pair of picnic tables.

The principal of online auctioneers Allbids Fyshwick, Rob finds a clue in the Silver Spur model’s two seats in front of him. He gently unfolds two small tables – the picnic tables – with varnished timber tops. Gleaming in the well preserved 1988 car, each table has space for a flute of champagne and perhaps some water crackers and cheese.

Welcome to the interior of this elegant lady, a grand motor vehicle created by aristocrat showman Charles Rolls and his partner, engineering maestro Henry Royce. The Silver Spur is for sale at Allbids Fyshwick. The days on the market are ticking down. The interest, awe and sheer motoring joy are rising. 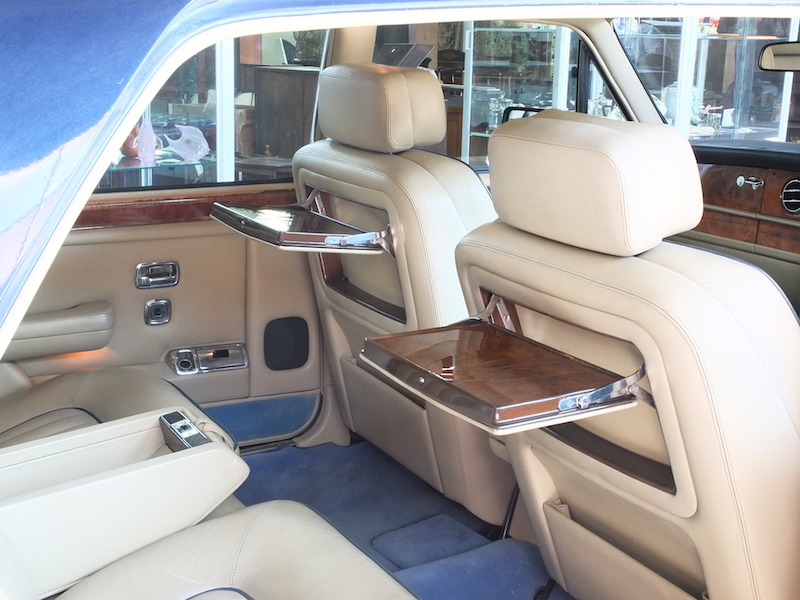 Picnic tables unfold inside the gracious Silver Spur Rolls Royce, which has numerous other pleasing features.

A Spirit of Ecstasy emblem crafted by sculptor Charles Robinson Sykes protrudes from the bonnet. Rob confirms the silver emblem is retractable. He describes the car as magnificent. Closing any of its doors emits a crisp crunch, confirming its quality.

Imported from the United Kingdom and stored in a Tuggeranong garage for 10 years, its elderly owner has passed away. The estate executors have enlisted Allbids to sell the Silver Spur. An excited Allbids’ mechanic replaced its fuel pump, installed a new battery and the ink-blue V8 burbled into life. It has a mere 56,000 kilometres on the speedometer.

From Ferraris to old Fords, Allbids has sold them all, but this is the first time a Rolls Royce has sat in the showroom, gracious among antiques assembled nearby from prominent estates, awaiting sale.

Rob says visitors who clap their eyes on the iconic car for the first time smile excitedly: ‘‘Oh wow!’ a lovely old Rolls Royce, wouldn’t it be nice to be sitting in the back of that and being driven around like you are in an armchair?”

Worth $360,000 new, the Silver Spur is now affordable, and conjures a motor vehicle purring across the iron and granite Windsor Bridge over the Thames River.

“A lot of people have said, ‘I’ve always dreamed of owning one’,” Rob says.

“Here is an opportunity to buy one where it is not going to cost you an arm and a leg. Bidding is at $20,000 at the moment, which would be an absolute bargain,” Rob says.

Bidding closes on November 8. Allbids is receiving interest across Canberra and southern NSW. The buyer will in all likelihood take it on as a project, polishing it to an even glossier finish, and driving it only on weekends.

Rob says the new owner will need a large garage, for this legendary motor vehicle is not for parking at the Woden shops.

“We want to create an auction urgency, we are working for the vendor, but here is an opportunity for a bargain, it is a win/win,” Rob says.

Judith Adraskan - 11 minutes ago
A lovely man who will be missed. I worked with him as a colleague for over 20yrs & he was forever gentle, polite & kind. RIP... View
Melissa Dean - 7 hours ago
Such a wonderful, hard working, caring man and friend, taken to soon. I will miss our chats. I learnt so much from him, and e... View
Opinion 107

Melänie Janė - 44 minutes ago
Ridiculous article. View
May Mac - 45 minutes ago
In suburbs of a certain vintage when small blocks were as large as large blocks are now, I have seen properties that look lik... View
Angela Clark - 47 minutes ago
Landowners? I believe land in ACT is leased not owned View
Motoring 39

Louis Larcan - 1 hour ago
And a bonnet scoop ! View
Community 2

Capital Retro - 5 hours ago
I should have stated the obvious namely most service station sites have ample space for both solar panels and batteries but I... View
Property 10

Elyse Albrecht - 5 hours ago
Caleb Albrecht lol apparently you can win an auction even after the hammer goes down 🤷🏼‍♀️ View
Jose Vega - 6 hours ago
In Spain loans for your own home is tax deductible.... Investment loans are not... Majority live in their own home. View
Joel Suryawanshi - 8 hours ago
Sarah Young we are also forgetting that the greedy real estate agents are bumping up the prices and attracting investors from... View
News 4