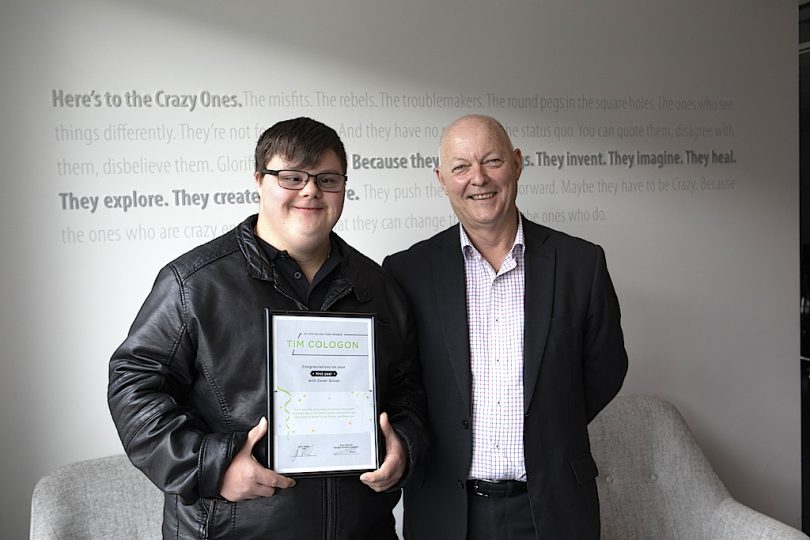 When Tim Cologon arrives for work with the Independent team, it’s already an awesome day. According to Tim, it’s triple-A awesome.

August 6 was definitely a day to remember, as staff gathered to wish Tim a happy birthday and give their most valued co-worker a few surprises along the way, including a ride in a Ferarri, and of course there was a chocolate cake that his mum made to share with everyone.

Tim’s boss Gary Butcher said employing Tim was one of the best decisions they have made.

“Tim comes to work happy every day and it just rubs off on people,” Gary said.

“For Tim, it’s just unbridled happiness and I think this is what we miss in the business world. It just reminds us what it’s all about.”

Tim lives with down syndrome and through the Independent Foundation’s partnership with the ACT Down Syndrome Association, has been working at Independent for 12 months, with August 6 also being Tim’s first work anniversary.

Tim says he loves keeping the office running and having a bit of time to stop and chat with the 170 employees in the building, who always enjoy seeing Tim in his daily travels.

“Gary is awesome and is a really awesome mentor,” says Tim. “He gets me to do emails, filing, archiving and scanning. I keep the coffee machine full and photocopier working.”

Gary says Tim does it all without having to ask.

“We feel we got it right when we offered Tim the job and I think it’s worked well for everyone concerned.” 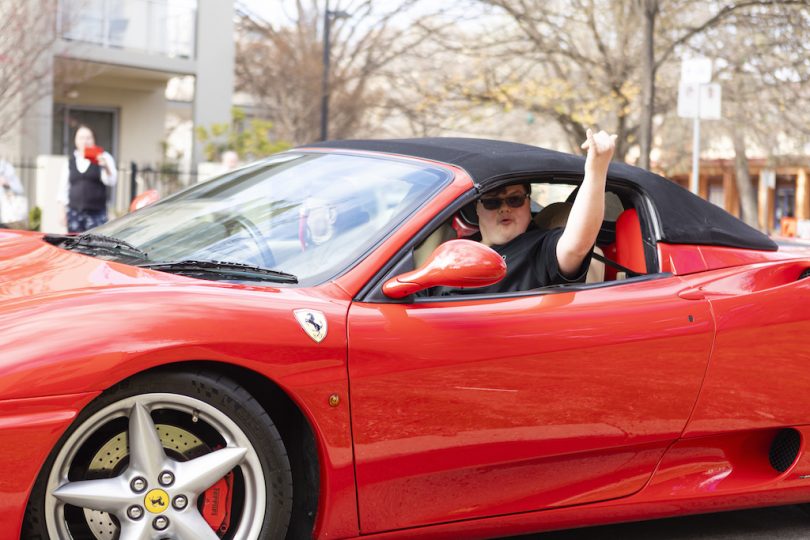 Tim hanging loose in a Ferrari to celebrate his birthday and first year of working with the team at Independent.

Independent became involved in 2012 when the ACT Down Syndrome Association had its funding cut and faced the prospect of closing the doors.

Independent stepped in as an annual sponsor and soon got to know the people involved.

“It was just a natural progression that we started conversations about employment, and given our experience, I’d recommend it to anyone,” Gary says.

“It’s incredibly rewarding and it’s also wonderful to see what it actually does mean to Tim.”

Tim had to go through a full interview process with 13 others but stood out with his natural confidence.

“It’s been a little bit groundbreaking for us,” says Gary. “We had to ensure we could keep Tim occupied and that’s no longer the issue.

“He can do anything I throw at him and he’s on to it straight away.”

Tim’s mother Barb Cologon said even when Tim was asked to come on a cruise to Hobart earlier this year, he declined because he didn’t want to miss anything at work.

“Working here has improved Tim’s confidence so much. His ability and self-esteem have grown and he’s so much happier as a person outside of work and inside as well,” Barb said.

Tim can be found dancing on the balcony during his lunch break on most days. He has been dancing for more than 10 years and says he was “a bit nervous” at first, but he has since performed at a gala night and now loves it.

The same can be said for Tim’s love of his job.

“When I first started here, I was quite nervous and I wasn’t always sure what to do, but I grew really quickly here and I just love this job. It’s like having a second family.” 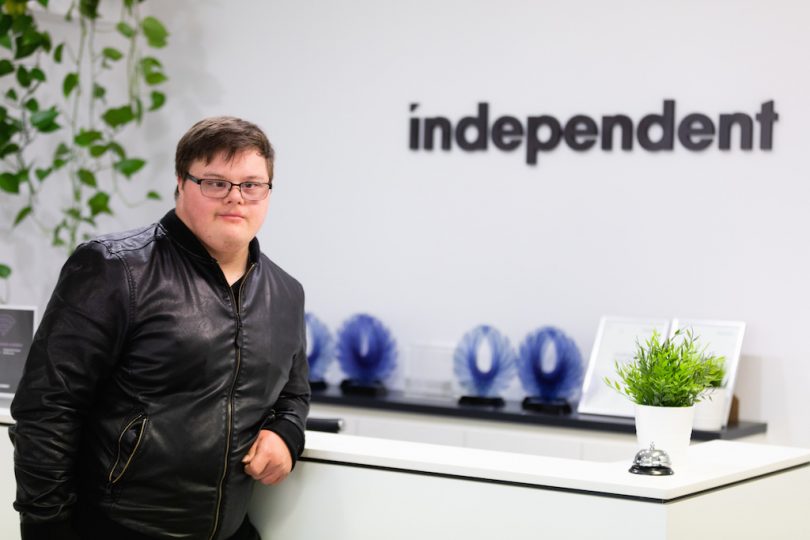 Gerry Satrapa - 1 hour ago
Peter Robinson “starting to pop up around the place”... like; where, exactly? View
Andrew Nelson - 11 hours ago
I see Julia bullship is working her magic View
Opinion 66

Matt Gard - 1 hour ago
Send them a note. "It's wired to the node." View
David Jenkins - 7 hours ago
Why? That's just the cost of the works in imposing this thing on a national heritage precinct. Just wait until all the cedars... View
James Balean - 9 hours ago
The issue can be resolved by asking “who’s the customer?” According to the light rail website, “Canberra's Light Rail... View
Opinion 16

Jill Lyall - 3 hours ago
Henry Kivimaki what’s wrong with socialism? It’s a better use of our taxes than building war machines and subsidising min... View
Marie Ryan - 9 hours ago
Bob Cheney Why would we want to get rid of the current govt when they've achieved a city that runs on renewable power and has... View
Marie Ryan - 9 hours ago
Henry Kivimaki We have a social democratic system which the Conservatives in the house on the hill are trying to dismantle an... View
News 177

JC - 10 hours ago
Opportunity cost works both ways. Think of the enormous costs that have otherwise been saved by not having to add extra road... View
John Kerry Tozer - 12 hours ago
Daniel Bryan - Be REALLY good if they told us how they are going to get across the lake! View
Sharvi Tinnlonga - 14 hours ago
I agree that the rail should go to Kingston, and then on to the airport if a suitable route could be found. I think the airpo... View
News 3

Robyn Holder - 10 hours ago
Bill Pappas if they were funded properly by govt they wouldn't have to rely on fees to run the uni. View
Lifestyle 6

Jose Vega - 14 hours ago
Waste of money the federal government has already written the conclusions and recommendations and is now spending my tax paye... View
Eric Anthony Lucas - 21 hours ago
Susie Edmonds on the contrary, it makes sense not to spend a fortune on enquiring into something the IPCC has already covered... View
News 6

Jeff Smith - 18 hours ago
I don't know whether the gang laws will work or not. But to claim this work 'as an Independent report' is far fetched. The au... View
show more show less
*Results are based on activity within last 7 days

One of the biggest events on the Canberra calendar arrives this weekend. The National Multicultural Festival will turn the CBD...
News 83

A violent brawl at Binalong near Yass during a bushfire fundraising event on Saturday night (15 February) has seen one...

Opposition leader Alistair Coe has asked Canberrans to have higher expectations ahead of this year’s election following the Government’s budget...
Opinion 59

The first stage of the proposed new cemetery in Canberra's south will have 2500 burial plots in a lawn and...
Opinion 14

The ACT Down Syndrome Association: a place of empowerment

Tech-driven rebrand launches Independent into the future of property

Property all about people for Independent