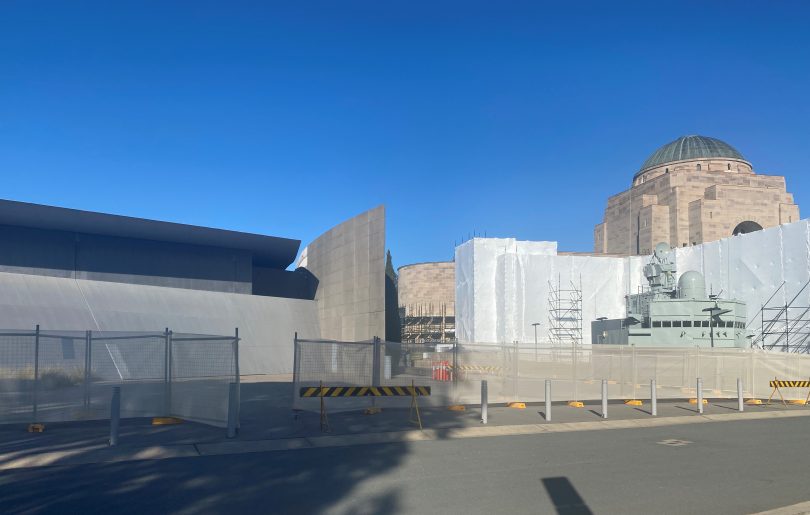 Fencing and hoarding is erected at the Australian War Memorial as early works in the expansion project get underway. Photo: Fiona Scott.

The Australian War Memorial has not wasted any time starting its early works program for the $500 million expansion of the national institution.

Barriers and fencing have been erected around the site and workers have begun cutting down 140 trees that are slated for removal, including mature eucalypts.

The award-winning Anzac Hall will be demolished and the site excavated to accommodate a bigger building which will be able to add contemporary conflicts and missions to its galleries, and house large war artifacts such as planes and helicopters.

The works cleared the final hurdle on 7 June when the National Capital Authority (NCA) gave the all clear, apart from requiring the War Memorial to plant 250 trees as part of the full landscape plan which will form part of the Public Realm works application to be submitted to the NCA in 2022.

All but three of the 601 submissions to the NCA consultation opposed the development, and the decision ignited a furious response from organisations such as the Australian Institute of Architects, the ACT National Trust and the Heritage Guardians.

The NCA was accused of not doing its job to safeguard the heritage values of the national capital, and that its decision set a dangerous precedent. The project was also labelled a waste of money and unnecessary.

But the project has bipartisan support, with the Greens the only party condemning the development.

On Sunday, 20 June, the Greens led a candlelit rally at the War Memorial in protest at the development approval, the impending loss of trees, and the destruction of Anzac Hall. 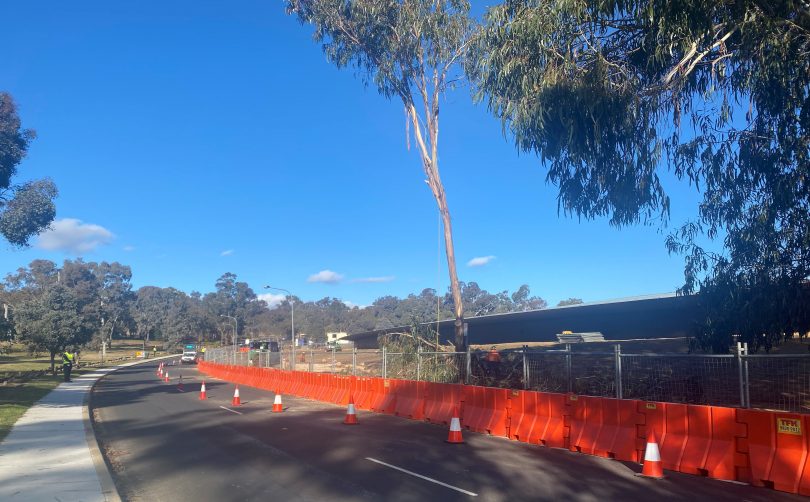 Tree felling is underway at the Australian War Memorial as part of its $500 million expansion. Photo: Fiona Scott.

Both the NCA and the War Memorial defended their consultation processes.

The NCA said it could only rule on certain planning matters, not whether the project was worthy or not, and War Memorial director Matt Anderson said the Memorial had consulted widely among Australians, who had generally been in favour of the proposal, and not just with ACT organisations and residents.

With the early works going ahead, the decade-long project will now proceed as planned, apart from conditions that may be placed on further stages.

Critics said separating the early works from the later stages in effect paved the way for a fait accomplis on the project.

But the War Memorial said the NCA approval was a welcome milestone, and it looked forward to further community consultation through the NCA process for the major works designs to be released in the coming months.

I have lost friends to military suicide and conflict, so making a place of national reflection of my fellow service personnel would be totally beneficial. However, the government needs to back it up by supporting us.

This just saddens me. As the current military is under 100,000 strong, we are a miniority. We have a higher suicide rate than Australia public. When we join, we sign a open agreement upto an ultimate cost as a possible outcome! Respect and compassion should be a government response. Bring on the Royal Commission and AWM expansion!

I agree completely. What has the PM had to say about it anyway. He’s always missing!

This Federal Coalition Government deserves to lose the next Federal election over this mangle. Let it be an election issue alone. There is no mandate from the people to destroy the peoples’ heritage.
SHAME!

Any plans to include the indigenous fallen soldiers on the INSIDE of the building any time soon?? 🤔

Troy Elroy have you ever visited? I think not.

Troy Elroy The AWM is to remember ALL Australians who served, regardless of race.

Absolute disgrace 😡 I would rather they were honest, it’s nothing to do with honouring veterans it’s just to pull in more tourists. How long before they start charging for the museum?

When we join, we sign a open agreement to an ultimate cost as a possible outcome!

Critics that state it was always a “fait accomplis” that the NCA would approve the early works need to learn how to read and understand public consultation. The project has been approved.

The NCA was not asked to approve the project, or consider its heritage value etc. It was asked to consider the early works against the National Capital Plan. If you wanted to stop it; you had your chance last year during the parliamentary work committee consultation. Gripes about that in the the over 600 submissions meant that less that 20 were in scope of the NCA’s considerations.

Ian,
I appreciate your efforts but I feel you are yelling in to the wind here. The opponents don’t care about the facts.

Thanks Chewy! I can’t help myself. It’s like whinging that it’s not hot in the middle of winter. Not a sole ever seems to want to discuss the facts; they are just interested in negativity. But I always appreciate your very sensible comments.

How many had to die in order to build more space to honour the horrors of war?

I think it’s to honour the valour in war Jim. We’d not be here if it wasn’t for those heroes. I agree war is horrible.

Soon look more like Sydney and Melbourne than the capital garden city it was meant to be.

Welcome to the Bush Capital*

*May only contain traces of bush.

Gabriel Spacca you need to look at photos of Canberra and surrounds before any construction was planned. Vast treeless plains. There are more trees now.

A little like the vote for self government. Nobody wanted it but the ACT got it anyway.

Great to see progress and the evolving memorial for the post 75 onwards Veterans.

Jack Horne yeah, let’s memorialise all those vets after they suicide due to a lack of support when they get home.

Michael Strand totally disagree. I have lost friends to military suicide and making a place of national reflection of my fellow service personnel would be totally beneficial. However, the government needs to back it up by supporting us instead of victimising us again

Australian War Memorial Nice to see you putting vanity and money before veterans. I know quite a few guys that would’ve loved some of that money to help with treatment.

Liam O’Toole as a veteran I want respect for our damaged and fallen. I want people at other end of King Ave understand the cost of sending our country and service personnel into armed conflict

Jonathon Sibly As a veteran I want the same. Only memorials don’t save lives.

And who wanted this, again?

Michael McDonald Brendon Nelson and a couple of others.

Michael McDonald – me too!

Brendan Nelson’s vanity project. Didn’t get to be PM.

Elroy Jones the war memorial is a shed??

Julie Mylchreest True to form for a local government. Out here theyre trying to steam roll through construction of a high school on the towns only park which has been dedicated crown land since the 1860s (in the heritage centre of town), taking out memorial stone pines thought to be seedlings from an original pine cone from Gallipoli, And much more besides. Barillaros last comment to media was this was an election promise and he’ll do anything needed to get it done. And thats only a small snapshot of the story. “Disgraceful” doesnt come near it.🤬

Kerry Doutch the pollies appear to have forgotten who they represent….just steam rolling everything. Makes me so mad.

Julie Mylchreest same. My blood pressure goes through the roof.

Julie Mylchreest why?? Would you rather Geocon appartments built there instead??

Jorge Gatica They did.

Lynne Audsley Local regional government with our esteemed Deputy Premier leading the charge. Copping it from both sides.

Jorge Gatica just cut down more trees along Commonwealth Ave to make way for stage 2A. Albeit they were nearly dead thanks to neglect during the drought.

Just wait until they cut down the beautiful old trees in front of Albert Hall.

“the community will be consulted (and solemnly ignored)”