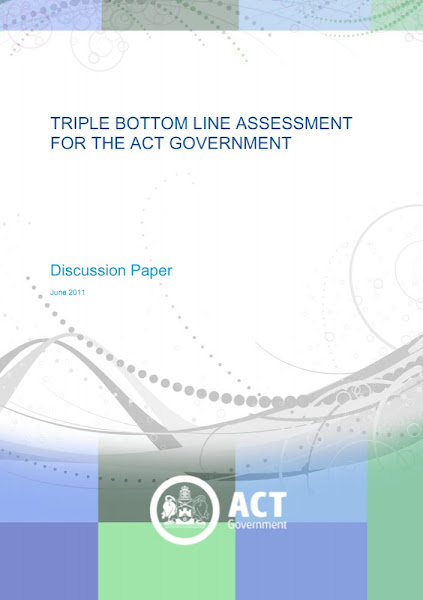 The Greens are celebrating the release of a discussion paper titled: Triple Bottom Line Assessment For The ACT Government.

“The ACT Greens have been pushing for this since Kerrie Tucker raised the issue in the Legislative Assembly more than ten years ago,” Greens Treasury spokesperson, Meredith Hunter MLA, said today.

“The Greens were able to commit the Government to progressing TBL through the Labor-Greens Parliamentary Agreement.

“Previous Treasurer, Ted Quinlan took up TBL in 2004, calling for submissions on the idea. However, this process was lost, and it has taken the Labor Government 7 years to develop a framework.

The TBL framework will be used for major policy proposals on the Cabinet agenda from tomorrow until a model is finalised in December.

“We would like to see this continue through the budgeting process for the 2012/13 budget, as this is where a lens to balance social, environmental and economic priorities is most vital to Government decision making.

“The TBL framework will also include a climate change impact analysis and a poverty impact analysis, which are key measures as we strive for the ACT’s 40% greenhouse gas reduction target while socially just Canberra,” Ms Hunter said.

Profit, Profit, and Profit has been the only focus to too many for too long. This Triple Bottom Line assessment now sounds like the ACT Government is getting on the right path.

Society, our Environment, and the Economy are all essential, and so all 3 should be a factors in the equation of government policy. If any 1 of the 3 collapsed we would be in trouble.

Julian Bahamon - 16 minutes ago
On the spot! View
David Cox - 12 hours ago
A fantastic man, has been since the very beginning of he’s career. View
News 16

chewy14 - 26 minutes ago
Acton, I don't agree that an audit might only find minor fraud, but it's debatable. It will definitely find that the scheme w... View
Acton - 1 hour ago
A review will find some minor fraud but the main rort was the whole scheme itself. It fails on equity and efficiency grounds.... View
Daniel Duncan - 7 hours ago
We have vouchers? View
Food & Wine 4

Rachel Edmondstone - 54 minutes ago
Liv Miller what a beautiful heart these people have! These are big, BIG things to women in need 🌻 Well done to the whole t... View
Juanita Tee - 10 hours ago
David Keir what are you specifically doing for them 🙃... View
News 11

Cooby Pedy - 1 hour ago
mazzie agree with you 100 percent in the .meantime these bloody climate alarmist keep spreading there false BS about renewabl... View
Peter Kline - 3 hours ago
Tony Armstrong great news. View
Mazzie Woodward - 9 hours ago
We don’t have a working hospital and they are building a giant battery 🔋 does anyone else find this utterly ridiculous? View
News 7

Roger Kropman - 2 hours ago
This is a disgrace but it reinforces the point that rubbish dumps / tips should be free to dump your trash, otherwise idiots... View
Nick Savino - 6 hours ago
CCTV and fine View
News 161

Mark Johnson - 5 hours ago
If it’s not licenced what’s it doing on a roadway anyway … View
Julie Macklin - 9 hours ago
Alicia Conley The ACT has no cycle paths. They are shared paths. Yes, those around the lake were built with people on bikes i... View
chewy14 - 10 hours ago
"That they are public doesn’t mean there are no rules for using them." Exactly my point. That the rules should preclude cyc... View
Community 16

Karla Hickey - 9 hours ago
Iain, I agree, also not a jumper (like Pete calls it, lol) View
News 21

chewy14 - 10 hours ago
Nobody, Interestingly, one year later, that number is down to 100 under construction or "planned", with another 300 "proposed... View
show more show less
*Results are based on activity within last 7 days

Not that long ago, my partner and I were part of the teeming masses of young people trying to get...
Community 50

@The_RiotACT @The_RiotACT
A mishap at the Murrumbidgee Country Club put half the greens out of action, but general manager Ray Duncan says the club will be back better than ever https://t.co/U6mM0hq6S0 (1 hour ago)

@The_RiotACT @The_RiotACT
If you can bake a cake celebrating the decades since the 1960s, then the annual CakeOff fundraiser should be a piece of cake https://t.co/ZE6j86IEMa (12 hours ago)