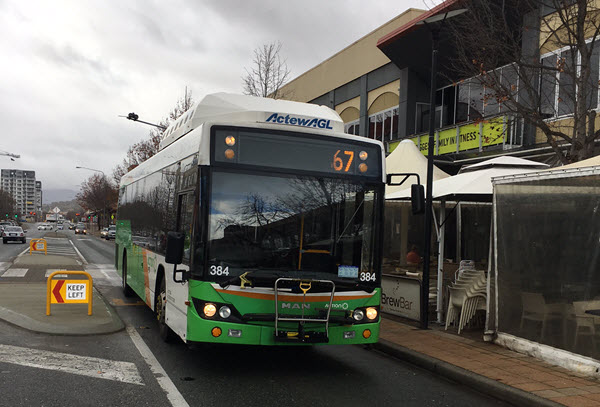 An ACTION bus passes by cafes in Anketell Street in the Tuggeranong Town Centre.

A petition to stop the buses running down Anketell Street in the Tuggeranong Town Centre has garnered a combined 500 signatures, enough for the matter to be referred to a Legislative Assembly committee.

Launched by the Tuggeranong Community Council, the petition is a key part of lobbying to improve the amenity of Anketell Street where outdoor cafes are contending with a constant stream of buses entering the Interchange.

The council says the recent Tuggeranong Liveability Survey identified revitalisation of the Tuggeranong Town Centre as the biggest concern, with the single biggest impact on the area being the use of Anketell Street by ACTION buses.

Council president Glenys Patulny said the buses were noisy, smelly and unhealthy, and the on-street cafes had them passing within a metre of tables.

The petition, which is open to the end of October, comes after the council approached the Government only to be told the requested diversion into Reed, Pitman and Cowlishaw streets to access the Interchange would add five minutes to the route and require six extra buses.

It is understood that the Government believes it would also cost an extra $500,000.

But Ms Patulny said the council had road-tested the proposal and found it to only add a minute to the route, even with the red lights.

She said Anketell Street businesses and the Hyperdome supported the move to remove the buses, which do not stop in that section of the street.

Brew Bar owner Peter Giannitsios said there was no real reason for the buses to be in Anketell Street.

He said they were a safety hazard, the noise of their hydraulics shocked customers and they kicked up dust every time they passed, blackening the shelves.

“Sometimes its like a road train, six, seven, eight of them lined up one after the other,” he said.

When it rained they splashed water everywhere and he had to maintain plastic barriers to protect his customers, many of whom had signed the petition.

He said it would definitely change the ambience of the area and be beneficial to his business if the buses were diverted.

Eventually, the council would like Anketell to be a shared zone and one-way as part of a strategy to revitalise the area and provide better links to the lake and the new development of South Quay.

“Buses are not conducive to a shared zone,” she said. “If we can get the buses from there it is more likely that people will want to sit out in the sun and enjoy the peace and quiet.”

Ms Patulny said that about 400 people had signed the print version of the petition and a further 100 the online version. She urged more people to sign to ensure the issue would be dealt with in the Assembly.

The council has also called for appropriate lighting to be installed in the carpark behind the Tuggeranong CIT, which it says is very dark and unsafe, not only for students but for the general public who use it at night to attend events such as those at the Tuggeranong Arts Centre.

Do you think the buses should be diverted? Are you a business being affected? How would you like Anketell Street to evolve?

It wouldn’t be too difficult to turn Anketell into a pedestrian plaza and reroute the buses. The streets in the Tuggeranong Town Centre are a grid pattern and there is a parallel street further down nearer the lake (Cowlishaw St). Simply run the buses along there and create a pedestrian plaza on Anketell St. Problem solved.

I think that would be a great solution John. It would be good to get some response from the TCC on that.

The buses wouldn’t be so noisy or smelly if they didn’t have to brake for all the speed bumps and accelerate again after each bump.

But why not move the cafes instead (why do we always have to ban something to deal with someone’s poor choices?) – surely it would be much nicer to sit in a cafe on the lake edge?

And I’m pretty sure the buses were going past for a while before someone decided to set up a cafe there.

BTW: when they said the detour only added 1min – did they time that in a bus, or their car?

Why not run trams? Even better and millions of dollars cheaper, would be electric busses.

It wouldn’t be too difficult to turn Anketell into a pedestrian plaza and reroute the buses. The streets in the Tuggeranong Town Centre are a grid pattern and there is a parallel street further down nearer the lake (Cowlishaw St). Simply run the buses along there and create a pedestrian plaza on Anketell St. Problem solved.

The buses wouldn’t be so noisy or smelly if they didn’t have to brake for all the speed bumps and accelerate again after each bump.

But why not move the cafes instead (why do we always have to ban something to deal with someone’s poor choices?) – surely it would be much nicer to sit in a cafe on the lake edge?

And I’m pretty sure the buses were going past for a while before someone decided to set up a cafe there.

BTW: when they said the detour only added 1min – did they time that in a bus, or their car?

Ban the cafes and the TCC from Anketell Street. The buses were there first and unlike cafes and whining NIMBYs, buses actually serve a useful purpose.

The buses were there before the on-street cafes. The noises are from the air brakes; not the hydraulics.