Tuggeranong will not yield to Gungahlin in Christmas horror stakes

Let me know if you see anything more elaborate. 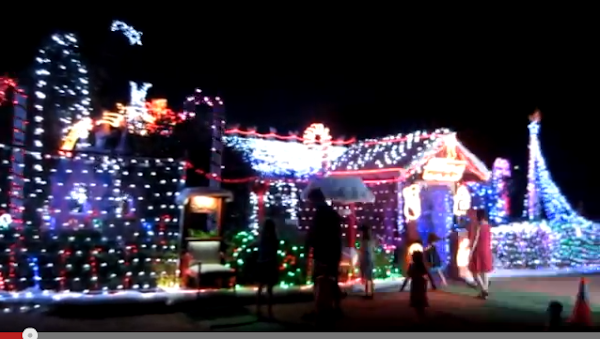 Well, they had nearly an identical set up last year so I don’t think usage would have changed much.

I don’t begrudge them their hobby at all. If thats what they like to do, I can see many benefits to them doing it. A lot of people enjoy it and I think anything gets people together for something that is meant to be good is a good thing.

It was more a stab at the rubbish journalism that goes on due to electricity price rises, admittedly though mine did rise.

Turn the other cheek?

Does anyone else find the whole thing disturbing? There’s something disquieting about all those random toys spread around and the garish lights. I don’t know if I find it horrific; it’s more that something’s not quite right.

I imagine it’s the same feeling as having a migraine about to start. Or when you have a hangover so bad that you only remember things that happened in flashes. I know I may be flamed, but it really makes me shudder.

Turn the other cheek?

Well, they had nearly an identical set up last year so I don’t think usage would have changed much.

I’m taking the camera there tonight …

You have to admire the time and effort that went into this setup, but wow, what a horribly garish mess. It looks like a Toys R Us store exploded and they covered it in LED lights!

And that, ladies and gentlemen, is how it is done.

Chris Cross - 1 minute ago
I hope so :). View
Dragan Gluhović - 16 minutes ago
Can't make everyone happy. He had a time to show his strength in politics View
Stephen Page-Murray - 35 minutes ago
Rooster James They used to vote Liberal... View
Community 8