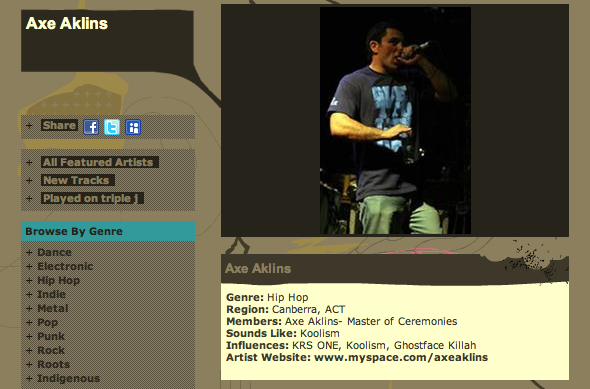 Unearthed Review is returning after a bit of a hiatus. Rather than choosing at random and being subjected to every lonely teen who thinks he’s the next Mike Skinner we’re going to work through the acts that have earned themselves a drum logo.

Next off the rank is former Raiders player Axe Aklins.

Axe has this to say about himself:

A seasoned performer with over 50 live performances under his belt- ranging from tightly packed clubs to large outdoor festivals such as the nationally telecast 2005 Australia Day Celebrations, Homebake 05 and Arrive Alive, Axe is as at home on stage as he once was, tearing up opposition in the NRL and the English Super League. Australian audiences will recognize Koolism-utility Axe from support appearances alongside local and international acts such as the Hilltop Hoods, Downsyde, Mixmaster Mike and Lyrics Born.

Axe’s moniker arose from the mispronunciation of his family name Atkins, by Raiders team-mate and good friend Leslie Vainikolo, combined with the title Axe, earned by a history of fierce conduct on the playing field. Axe Aklins carries the same emotion and conviction into the recording booth and onto the live stage to this day.

I have a theory that more people want to perform Australian hip hop than want to listen to it. But you could say that of pretty much all original music, there are over 720 ACT acts listed on Unearthed now.

(I wrote this sentence for my last review, but it remains firmly the case so there you go again.)

The first song “protest song” seems to be a combat fantasy with a fig leaf of “war is not the answer” dubbed in.

The loops are smooth and he’s proficient, but for the material a bit more real anger would help at least give the cliches conviction.

In many ways the second song “wood” is the better of the two, it’s got catchier beats and is more interesting musically and in its story.

Maybe he’s a tiger live on stage, but this all just seems a little flat.

Julie Macklin - 37 minutes ago
Alicia Conley The ACT has no cycle paths. They are shared paths. Yes, those around the lake were built with people on bikes i... View
chewy14 - 1 hour ago
"That they are public doesn’t mean there are no rules for using them." Exactly my point. That the rules should preclude cyc... View
Craig James - 2 hours ago
Keep riding your bicycles on the road, Darwinism at it’s finest 🤷🏼‍♂️ View
News 9

Mazzie Woodward - 51 minutes ago
We don’t have a working hospital and they are building a giant battery 🔋 does anyone else find this utterly ridiculous? View
HiddenDragon - 5 hours ago
"....will ensure that the nation’s capital remains at the forefront of a booming industry – supporting new jobs in emergi... View
News 21

chewy14 - 1 hour ago
Nobody, Interestingly, one year later, that number is down to 100 under construction or "planned", with another 300 "proposed... View
whatwik - 7 hours ago
There's certainly a nuclear reaction from the usual suspects here any time renewables are mentioned. View
Futureproof - 7 hours ago
Nuclear - the Greens say no New hydro dams - the Greens say no Windfarms in remote areas - Bob Brown says no... View
Community 49

Juanita Tee - 2 hours ago
David Keir what are you specifically doing for them 🙃... View
Liv Miller - 3 hours ago
Rachel Edmondstone love 💓 this View
David Keir - 7 hours ago
Virginia Loizou sounds like you’re the one whinging champ View
Property 28

David Conway - 4 hours ago
Colin Ball totally not fair and they get to play grand theft auto in prison.... View
Community 8