Unearthed Review: D’Opus & Roshambo. Three and a Half stars 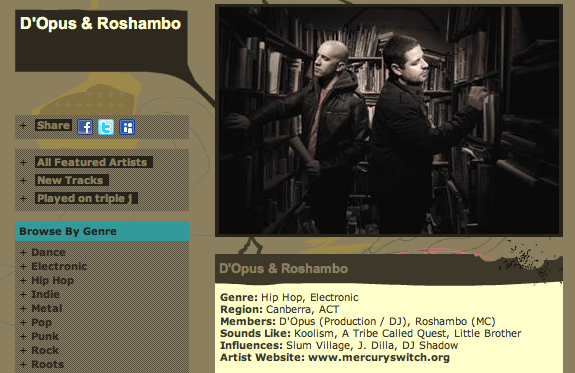 Today’s random selection is D’Opus & Roshambo who write of themselves thusly:

D’Opus & Roshambo are set to unleash some new material, and are spearheading it with their new single ‘Come Find Out’, featuring Chanel Cole on the hook (alternatively, off the hook, depending on how you look at it).

Ross Garrett (D’Opus) and Rowan Thomson (Roshambo) met in 2003; D’Opus already an established DJ having supported everyone from the Jungle Brothers, Q*Bert, Mr. Thing and De La Soul, while emcee Ro had built up an impressive reputation for spreading the hip hop gospel through his long-running show on 2XX FM. Taking inspiration from the golden era of hip hop, classic funk and contemporary drum ‘n bass, Ro & D’O came up with tight blend of story driven hip hop and rich musical diversity.

Having worked together for only a few months the lads released a promotional single ‘The Question’, which received national airplay on Triple J’s Hip Hop show. The duo’s first EP The Question was released in 2006 and distributed through legendary local imprint Obese Records. 2008 was a massive year for Ro & D’O, seeing the release of their full-length album The Switch (Mercury Switch/ Shogun).

Their single ‘Million Dollar Bill’ proved to be a bonafide Triple J favourite, spending a good portion of the year on high rotation, and being in the Top 100 most played songs on the station for the year. The duo received further support by being featured in JMag’s ‘Home & Hosed’ and Rosie’s Vox Pop saw her roaming the streets with ‘Million Dollar Bill’ in hand. This culminated as D’Opus & Roshambo were chosen as part of Triple J’s Next Crop in November ’08 (alongside Cassette Kids, Pez, Philadelphia Grand Jury, Horror Show, and Oh Mercy), with the second single ‘The Basement’, featuring Canberra indie-rockers Hancock Basement.

Far from being content with airwave representation, D’Opus & Roshambo played a flurry of shows in, supporting the likes of Krafty Kuts, Muph & Plutonic, TZU, Downsyde, Koolism, Low Budget and The Bamboos, and hitting the stage at Soundscape (Hobart) and Corinbank. ‘Million Dollar Bill’ and ‘The Basement’ also received rotation on ABC RAGE, JJJ TV and Channel V.

“Our second album has been a long time coming. It is the album I’ve wanted to make ever since I started this emcee thing” shares Roshambo. “It is the type of record that has been in our minds waiting to be born and made real. Where ‘The Switch’ was about making the leap from EP to LP, from making casual songs to a full blown full length record and taking ourselves more seriously, this new record will be our first cohesive album with a tangible theme at it’s core.”

2010 is upon us and D’Opus & Roshambo have something keen to share. ‘Come Find Out’ certainly sounds like the right sort of invitation.

D’Opus & Roshambo are one of the most successful Canberra bands of the last decade and certainly deserve a lot of respect.

A lot of people love their take on Australian tinged hip hop.

There’s a lot to admire about the slick production and the catchy beats.

But there just isn’t anything in these three tracks that, to this reviewer, lifts them out of the “pleasant background music” category.

One Response to Unearthed Review: D’Opus & Roshambo. Three and a Half stars
Filter
Showing only Website comments

You should hear them live Johnboy, bloody awesome!