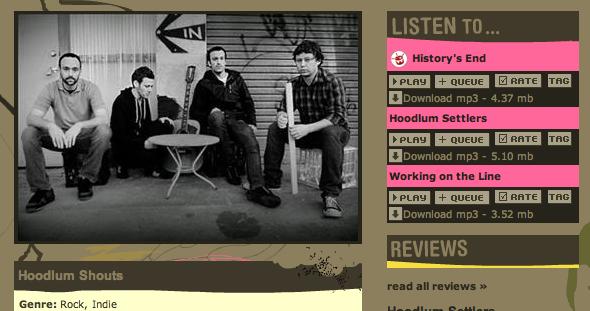 Unearthed Review rides forth once more.

Today our alphabetic journey through the rated Canberra bands on the TripleJ Unearthed website brings is to the Hoodlum Shouts.

The Hoodlums have this to say about themselves:

Hoodlum Shouts combine a tendency to brood with a genuine search for idyllic
melody – sleepy hooks sewn into songs you can raise your glass to. The band’s
guitar-saturated heavy rock has been described as ‘The ’Oils on Valium’. The
band recorded their debut six-track EP Horses and Human Hands at Damien Gerard Studios, Sydney, with Russell Pilling; which was self-released in June.

This is a review of two halves.

The first song “History’s End” is a ball tearing traverse of the territory between Midnight Oil and the Dead Kennedys.

So much anger against the zeitgeist it makes you clench your fists and then start pumping them in the air.

All the seething disappointed rage of Generation X piles up in this rocking number. When the boomers get what’s coming to them this could be the soundtrack.

Forget local music, if you like your music loud and angry you want to download this one.

The other two songs are still brooding, but less angry, less rocking. Music for 11pm with the lights turned off and remembering life’s disappointments.

If they were all “History’s End” I’d give five stars but overall, they’re an honest…

Nick Savino - 7 minutes ago
I prefer making coffee at home don’t see the point of cafes everyday View
Nick Savino - 10 minutes ago
Stephen Page-Murray correct the food is rubbish I complained so many times that the food manager and his 2 mates came to my r... View
Amy Nelson - 39 minutes ago
Sashika Mendis we loved living there. Now living in Melbourne, a “most liveable city”, we question why more people don’... View
News 5

chewy14 - 2 hours ago
I think it's unfair that people who work more years than I do, in jobs that pay more than mine does, end up having more money... View
Opinion 66

Brad Kelly - 13 hours ago
Seriously if they all go the Canberra raiders have depth... yes they will not win a GF and that’s ok 😮 it’s a game ...... View
Maree Hillery - 15 hours ago
Richard Willcoxson pretty soft. Where's their loyalty. View
News 11

Marc Edwards - 13 hours ago
Maybe the Berra Party View
Paul Leins - 13 hours ago
Sure, just bet a former liberal will be a real check to his mates in the liberal party 🙄 View
Michael Ilsley - 14 hours ago
Glad to see him engaged in the community after the tragic loss of his son. View
What's On 1

A huge family home in Florey has sold at auction for $1.6 million, setting a record for the Belconnen suburb....
Opinion 75

When I was a child, my family went to church every Sunday. We would have been outsiders if we didn't....
Opinion 75

@The_RiotACT @The_RiotACT
A Mini Cooper drove through the shopfront at KFC Hawker last night. Remarkably, no one was injured https://t.co/5sfUWXD1q0 (20 minutes ago)

@The_RiotACT @The_RiotACT
On average, women in Canberra retire with $200,000 less superannuation than their male neighbours. A women's forum has sought to address these and other gender imbalances https://t.co/6JWzAzawsv (50 minutes ago)

@The_RiotACT @The_RiotACT
A 26-year-old from Denman Prospect blew a kiss to a supporter via video link as he was granted bail after being accused of operating in the high end of the drug distribution network https://t.co/6Ihdl3o677 (1 hour ago)