Unearthed Review: Jules Cowley. Three and a half stars 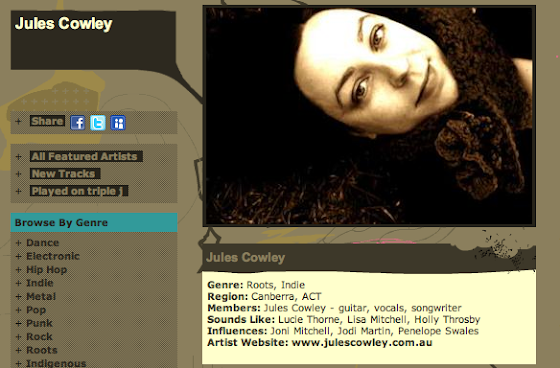 Today’s random selection is Jules Cowley who describes herself at some length thusly:

Having received an AMusA in classical music, and after realising that busking with a piano wasn’t going to work, Jules took up a regular Thursday and Saturday night busking spot with a friend, two guitars and a harmonica. Although a Don McLean fan, singing American Pie over and over again wasn’t as rewarding as she had hoped, and so she soon began writing her own songs.

Her song ‘Butter Side Up’ which captures the first moments of falling in love, was selected as a finalist for Triple J’s ACT Unearthed back in the day when the independent youth radio shortlisted songs. With over 300 entries in the finals it was a surprise for all given that JJJ aren’t so well known for their love of quirky folk music. Still the upbeat tune secured one review as ‘Jules sounds happier than Frente’.

Jules released her first EP ‘Weather Talk’ in 2004 and played a number of small festivals including a beautiful gig in the church at Majors Creek where the acoustics were amazing and a woman in the front row cried – from joy, or sadness or something.

With songs about the everyday things in life – loss, love and friends – her music unashamedly mentions the people and places of Canberra.

Jules has warmth to her voice and her melodies make you feel like you’re eating icecream on a sunny day. Her nostalgic songs make you smile while you put on rose coloured glasses.

In 2010, Jules has been working on a full length album which will bring together a collection of new material with lovely lyrics. She is fairly confident that when the album is finished, if Molly reviews it he’ll tell you to ‘do yourself a favour’.

Sitting somewhere between Frente and Joni Mitchell this is all very competent.

Any artist who can use “acrostic” correctly in a lyric is OK by me.

But if you don’t then there’s really not enough in these two tracks to make it worth coming over.