Unearthed Review: Little Smoke. Three and a half stars 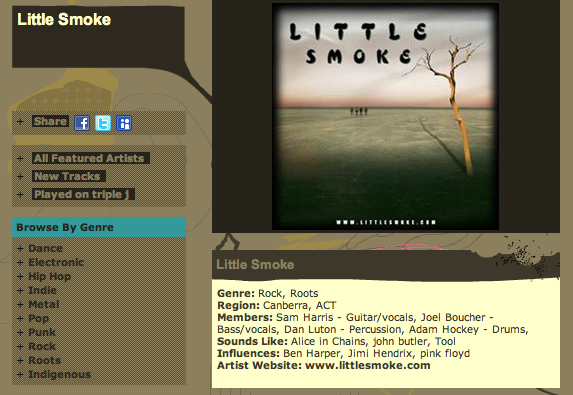 Today Unearthed Review lights one up with Little Smoke.

Today’s random selection is Little Smoke who have this to say for themselves:

Little Smoke are no strangers to playing big shows. Some achievements include

Have supported bands such as

And played some great venues

Released a self titled EP and a two track single called skins.

One of the unearthed reviewers described these guys as “Stoner rock with african sounding drums”.

It’s hard to go beyond that.

Knowing how mesmeric they can be live the recordings are a slight disappointment, but bear in mind that’s coming off a very high standard.

It’s telling they list Tool and John Butler Trio as their influences, landing very closely between those two.

One Response to Unearthed Review: Little Smoke. Three and a half stars
Filter
Showing only Website comments

Been following little smoke since they were originally called Space is dead and playing at Finnigans in late 90s. Good to see theyre still going strong, even tho the bands line-up appears to have changed a little since the early days.