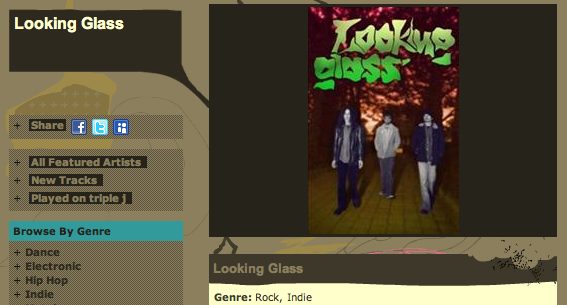 Moving on through the “drummed” artists we come to Looking Glass.

They have this to say:

Looking Glass have earned a steady following, entertaining fans with their high energy live shows. Thundering drums and loud guitars make up a great deal of the Looking Glass sound, with both guitar and bass solos being a primary ingredient in the live show. To think of similarities with other groups brings one down the vein of early 70’s sounding English rock bands. The influence from bands like Black Sabbath, Led Zeppelin and St. Vitus can be heard at times, with Looking Glass’s own ‘uber loud’ sound having been compared with ‘stoner rock’ bands such as Kyuss or Cathedral.

“Fans of Wolfmother looking for something harder get ready – this is power trio gold. One of the best things I’ve heard all year by a long shot.” – BMA Album of the Month Dec 2006

Why do young bands want to sound like the ancient and discredited?

It’s common throughout music, the Canberra Symphony Orchestra has dozens of musicians who desperately want to sound just like the Vienna Philharmonic of 1842.

And Looking Glass want to sound like Black Sabbath of 1972.

They do a pretty good job of that, although with just the one song available it’s a little hard to tell.

Wolfmother did a similar thing with Led Zepplin and I wasn’t a huge fan of that either.

It’s not as if I can’t download Led Zep or Black Zabbath on iTunes if I want to cop a nostalgia hit.

And there are plenty of straight tribute bands if that floats my boat.

I mean I know it’s fun and all in a jam session to try to sound like well known bands, but why base a whole performance persona on it?

Looking Glass do what they’re doing well, so I look forward to their future offerings.

But for now it’s just…

Eyeball In A Quart Jar Of Snot said :

Yep. But because it isn’t bearded folk music or self-conciously quirky indy-pop, it tends to fly under some people’s radars.

You’d do better to take a leaf out of Lez Lozenger’s book (see above) and offer a balanced counter-point.

Genre specific slags are a bit cliche and reek of laziness – especially in a small town of hard-working, multi-genre musicians.

Looking Glass have been doing their thing for a while and certainly hold my respect.

Eyeball In A Quart Jar Of Snot said :

Yep. But because it isn’t bearded folk music or self-conciously quirky indy-pop, it tends to fly under some people’s radars.

Can’t comment on the recording, but live these guys are far superior to anything I’ve heard from the Unearthed reviews so far.

I guess it depends on what the band themselves are into. I don’t think they are trying to be anyone. They are just doing what they do best because that’s the kind of music that inspires them. In my opinion, they happen to be very good at what they do. I’ve seen them many times and they’ve never done anything other than play an energy packed show full of great hard Rocking songs.

You are right though Johnboy – it’s hard to judge a band on one song. I’d recommend listening to an EP. Particularly Looking Glass #1. If you’re into hard Rock at all, you’ll love it!

Les Lozenger’s review: 5 Stars. Both as a recorded and a live act.

Capital Retro - 22 minutes ago
Oh, the perils of virtue signaling. It would be hilarious (like an episode of Yes Minister) if it didn't mean this will cost... View
Opinion 77

Nick Savino - 57 minutes ago
I prefer making coffee at home don’t see the point of cafes everyday View
Nick Savino - 59 minutes ago
Stephen Page-Murray correct the food is rubbish I complained so many times that the food manager and his 2 mates came to my r... View
Amy Nelson - 1 hour ago
Sashika Mendis we loved living there. Now living in Melbourne, a “most liveable city”, we question why more people don’... View
News 5

@The_RiotACT @The_RiotACT
Planning authority has rejected the controversial W2 high-rise proposal in Woden but it is not going away https://t.co/FlTw7zPKZc (24 minutes ago)