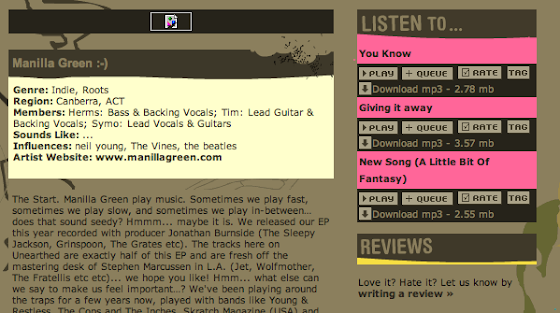 Today’s random selection is Manilla Green who describe themselves thusly:

The Start. Manilla Green play music. Sometimes we play fast, sometimes we play slow, and sometimes we play in-between… does that sound seedy? Hmmm… maybe it is. We released our EP this year recorded with producer Jonathan Burnside (The Sleepy Jackson, Grinspoon, The Grates etc). The tracks here on Unearthed are exactly half of this EP and are fresh off the mastering desk of Stephen Marcussen in L.A. (Jet, Wolfmother, The Fratellis etc etc)… we hope you like! Hmm… what else can we say to make us feel important…? We’ve been playing around the traps for a few years now, played with bands like Young & Restless, The Cops and The Inches. Skratch Magazine (USA) and Starving Kids Records (Brisbane) were kind enough to include our demos on their CD samplers – sharing the disk with bands such as Bright Eyes. Songs of ours have been used as the backing track for all sorts of things such as the 2008 ATOM Awards being held in Melbs. Yeah.. its all pretty fun. The End.

These two tracks had me bopping around the office.

The Burnside production is evident. If you like The Grates or The Sleepy Jackson you’ll like these.

Toe tapping, put a spring in your step rock n’ roll, with jangling guitars, kicking drums, and vocals that get it just right.

It’s good for what ails ya.

Andrew Sage - 31 minutes ago
On my ... View
Denise Bourke - 44 minutes ago
We love the work of mower teams and their supervisors. Keep em coming. View
Trish Hunt - 2 hours ago
We just had a week in Canberra visiting our son and we commented on the long grass everywhere we went. I ask if there was a m... View
Public Sector 22

Brianna - 3 hours ago
That is a very interesting question. My husband and I are both double vaxxed and yet we both got covid back in August.... View
Mike Carroll - 4 hours ago
How many of the new cases are double vaccinated? View
News 6

HiddenDragon - 4 hours ago
With Australia's international border being "thrown open" (as tonight's TV news reports are reminding us) from next Wednesday... View
jorie1 - 5 hours ago
Close the international borders to everyone but Australian citizens! And have strict quarantine for Aussies coming in here .... View
News 17