Unearthed Review: Readable Graffiti. Three and a half stars 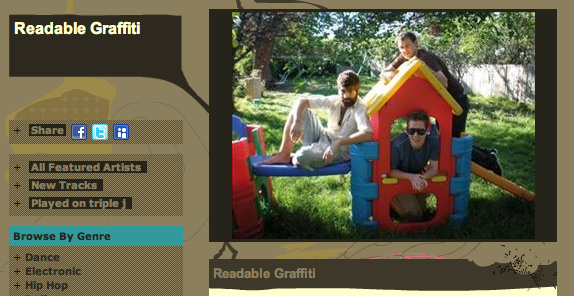 Moving on through the “drummed” artists we come to Readable Graffiti.

Readable Graffiti began when Chris Readable and Christian Graffiti discovered their shared love of electronic music and started making beautiful noises together in the bedroom. The introduction of lead vocalist Buttons Machiavelly completed not only the sound of Readable Graffiti, but also the ambitions of Chris and Christian to talk to other people.

The Graffiti live show is an energetic mix of dance beats and rockstar posturing. Buttons handles the vocals and the attention-seeking behaviour. Christian plays keys and drum pads while googling himself on a laptop. Chris fiddles with mysterious buttons and knobs on a box of flashing lights, while shredding on a very shiny blue guitar.

Readable Graffiti’s debut EP has been supported by RRR in Melbourne, FBi in Sydney and by JJJ’s “Home and Hosed” and “The Sound Lab”. Meanwhile, the Graffiti live experience has become a well-oiled beast with three backs, with a show that has proven as effective in the moist confines of Canberra’s more intimate venues as it has on the enormous Moolin Rouge stage at the 2010 Groovin’ the Moo festival.

The Graffiti boys have commenced work on the “Male Mood Swings” EP, and are busy making plans for its release in mid-2011.

Readable Graffiti are well known to your correspondent and I have to say I’d pay good money to see their loony live shows.

As electronica goes they have a lot of lyrics, which means they usually have a chorus, and sometimes even one verse.

Listeners coming from the mainstream might find this a bit sparse, but trust me, it’s a big step in your direction.

Their frenetic shallowness (and that’s intended as a compliment) is perhaps best summed up in the line from their song Curse The Night: “No regrets, until tomorrow”

It’s fun, it’s danceable, it’s better turned up loud, and when seen live they’re one of the best party bands in town.

Three and a half stars

2 Responses to Unearthed Review: Readable Graffiti. Three and a half stars
Filter
Showing only Website comments

…and started making beautiful noises in the bedroom?

I’ve seen these guys live a few times. They are unreal!

Julie Macklin - 3 minutes ago
Carole Ford Not many people cycle for sport. Most people use it for transport. View
Mark Johnson - 7 hours ago
If it’s not licenced what’s it doing on a roadway anyway … View
Julie Macklin - 11 hours ago
Alicia Conley The ACT has no cycle paths. They are shared paths. Yes, those around the lake were built with people on bikes i... View
News 20

Mark J Avery - 36 minutes ago
Try working next door to this dumping ground!! View
Roger Kropman - 4 hours ago
This is a disgrace but it reinforces the point that rubbish dumps / tips should be free to dump your trash, otherwise idiots... View
Nick Savino - 9 hours ago
CCTV and fine View
News 14

@The_RiotACT @The_RiotACT
Snapper at the Canberra Southern Cross Yacht Club is getting a makeover. Check out the plans https://t.co/Ul1f9X7YUR (34 minutes ago)