Unearthed Review: Super Best Friends. Two and a half stars. 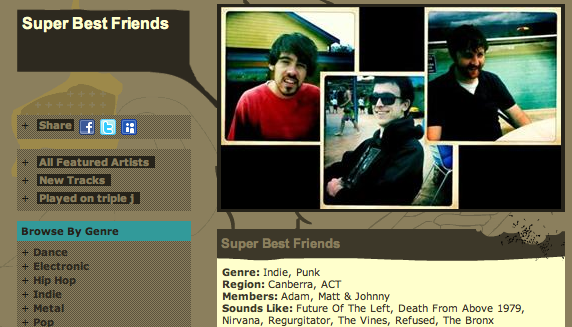 Moving on through the “drummed” artists we come to Super Best Friends.

Two EPs, countless road-trips to Melbourne and Sydney, triple j airplay and a video clip on Rage later and Super Best Friends are finally working on a debut album. Set for release in 2011, it’ll be the first record of a unified and focused SBF sound, that won’t be without the edgy indie-punk ethos or biting lyrics.

Super Best Friends support Children Collide and Violent Soho in Canberra and regional New South Wales soon, after a string of local shows with Peabody (Syd), Dictaphone Blues (NZ), Lions at Your Door (Syd), The Fighting League and interstate visits with buddies Hoodlum Shouts. A joint east coast tour with another infamous ACT band is in the works and SBF are planning on crossing the ditch to New Zealand in the new year.

For triple j’s Ausmusic Month, The Doctor recently interviewed Johnny for the Unearthed Digital Radio Show featuring the song “Ready Aim Fire!” and from the same EP, “Yeah Yeah! Hey Hey!” has found its way onto US college radio, after its listing as track two on the American “Punk Kills!” compilation. This lead to an email about label representation in the States, but it might be dodgy. What wasn’t dodgy was Super Best Friends’ Catapult Comp win to play Stonefest 09, with Frenzal Rhomb, Art vs Science, British India, Children Collide and The Living End. SBF haven’t rigged a band comp since.

Super Best Friends are a tricky band to review.

They’re very good at what they do, but then what they choose to do sometimes makes one ask why?

SBF put on a great live show and can really get the kids up and jumping around.

But the scope of this review is the music they’ve put on the Unearthed site.

Which is just a bit on the painful side to listen to.

If you like your vocals shouty and largely unintelligible over crashing beats then this could well be for you.

But in the broader scope of music most people would choose to listen to? Well there’s a lot of other things we’d hit first.

Two and a half stars.

David Riddell - 5 hours ago
Unless interstate waste is banned from Mugga the waste could still be accepted even should CRS facility becomes operational.... View
Alex Troy Elsworth Adkins - 6 hours ago
Marea Fatseas the site is on the railway line with exsisting sidings thst would allow waste to be transported by rail to Tara... View
JC - 6 hours ago
Maya the land in question used to be a petrol terminal. I wouldn’t call that light industrial and that terminal had been th... View
Lifestyle 1

rationalobserver - 12 hours ago
3 points; No sane person would raise the topic of Defence force help in the same breath as raising the possibility of a law s... View
Simon Lynch - 1 day ago
I'd check the facts first Kerry. At the time there was no fire in ACT and yet your wonderful Administration hired the helicop... View
News 1

Capital Retro - 12 hours ago
Slowly but surely all cell-phone challenged reception areas in our region are being addressed. Last week the new Telstra 4Gx... View
Sport 20