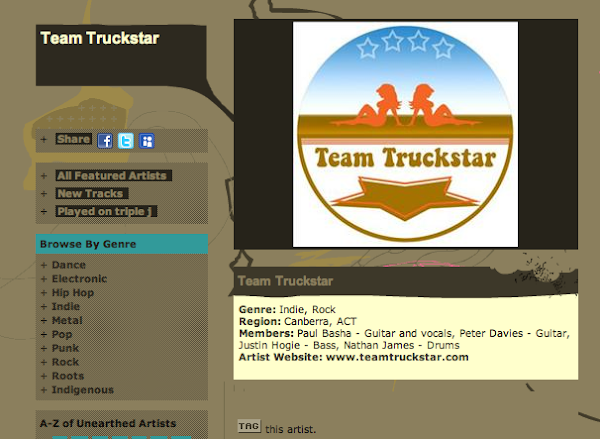 Today Unearthed Review is jamming along to Team Truckstar.

Today’s random selection is Team Trusckstar who direct the audience to their own website where they have this to say:

Once again, that lonely truckstop, the portable diner of life, has destined that four individuals should be thrust together for a purpose that can only be explained by their love of the big rigs and alternative rock music.

Jack, Joe, Jake and Jim Truckstar met late one night in a forgotten truckstop on the dusty plains of outback New South Wales, Australia, in a place where the wheatfields become a dustbowl and men can haul a load for days without speaking to another soul.

Over a late night ‘fry-up’ it became clear that these four lonely travellers could produce a brand of Rock music that combined a love of a sweet melody with the driving rythmn of an 18-wheeler.

From time to time – who knows where and when, these four truckers (or “Team Truckstars” as they have come to be known) come together to combine their passion for Rock with their love of oversized long haulage vehicles and associated appliances.

So, if you get the chance, why not come on join this convoy of Rock sometime.

When the track “In the fight” opens up you think it’s the second coming of REM’s Orange Crush. But then it turns into angst rock.

The strong driving guitars are a major feature of Team Truckstar.

Sadly the recordings aren’t great and I think we’re all over angsty lyrics?

I like their name and logo. Perhaps like they should explore country or country rock a la The Wolverines.

Heavs - 12 minutes ago
I actually like what the Tasmanian Government just did. They partnered up with Hockey and bought a rolling bunch of events to... View
Capital Retro - 1 hour ago
"The sports organisation would, of course, require a substantial amount of money from the ACT Government to attract the event... View
Hans Dimpel - 1 hour ago
big professional corporate sporting organizations just go around harvesting grants and subsidies off taxpayers, leaving less... View
News 2

Vander Leal - 20 minutes ago
David Jackson maybe you don't see how public debt has been used to "keep the economy alive and thriving"... Nothing wrong wit... View
David Jackson - 3 hours ago
Interesting to know how? If I ran my business at a loss every year for the last twenty years and accumulated more debt while... View
News 1

nobody - 25 minutes ago
Colonisation turned this continent into the great country it is today. If colonisation had not taken place, then MLA Paterson... View
Community 7

@the_riotact @The_RiotACT
An inquiry into a proposal to #decriminalise possession of small amounts of illicit #drugs - including MDMA, heroin and ice - has recommended the bill be passed by the Assembly, albeit with a few changes https://t.co/47MpvWYcpS (43 minutes ago)

@the_riotact @The_RiotACT
There's more to hosting global #sporting events than stumping up cash to the organising body - you also need #venues which, as Tim Gavel notes, is also a problem for the ACT https://t.co/1ivTV1rHfA (3 hours ago)