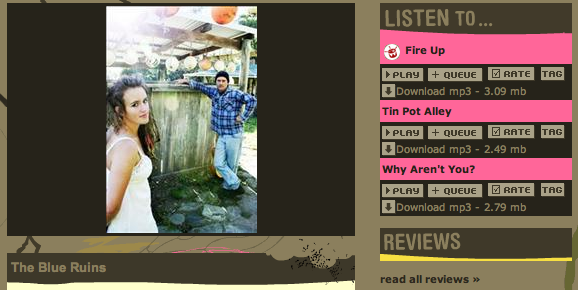 Moving on through the “drummed” artists we come to The Blue Ruins.

The first thing that comes to mind when you watch a performance by The Blue Ruins is there’s nothing “ruined” about The Blue Ruins!

Contrary to their name they are on the rise.

In a world of false idols and half arsed music, they are a bluesy, rootsy refreshing act to follow.

Singer/guitarist Kate Watts is a 22 year old powerhouse, her voice and ability to hold a crowd is impressive for a lady her age, performing great blues tunes as well as original compositions which like herself, hold an earthy and honest beauty.

Kates father Allan, the other half of The Blue Ruins, is an incredible guitarist, completely supportive in every tune.

His effectiveness and skill can only come from years of experience, yet to see him onstage you wouldn’t think this was Kate’s father.

Many guitarists don’t understand “less is more” but Allan is a master of this, an incredibly tasty and thoughtful guitarist, selfless in his approach. But when he adds a solo you quickly realise he’s no backing guitarist.

Having just recorded they’re new album, they’ll be hitting the road for the rest of 2011 and beyond, so if your a lover of rootsy grooves and a soulful experience, get onboard with The Blue Ruins.

‘Up and coming folk-rock-blues duo, The Blue Ruins, blew minds at this year’s festival. With their big vocals, intricate melodies and original tracks they filled each stage they walked upon.’ –FasterLouder

‘They are one of the Top 5 Blues and Roots artists in Australia’-Tim Dixon, MusicOz

Two things happened as the opening licks of the first track “Fire Up” came out of my speakers:

1. I leaned back in my chair and exclaimed “wow, actual music”
2. From his corner of The Eagle’s Nest Rafe Morris started shouting “Five Stars! Five Stars!”

There is some question as to whether the Blue Ruins are an ACT band, but despite coming from Bega they self-identify to the Canberra region on the unearthed website.

The music is bluesy, catchy, pleasant to listen to, and totally danceable.

There’s a slight hint of the better bits of Blue King Brown.

The recording and production is great and we totally recommend you avail yourself of the three free downloads.

Caroline Loffler - 35 minutes ago
Darren Loffler lucky you got out when you did View
Allan Evans - 1 hour ago
Tim Primmer They are keeping their print and digital editions separate. If you are a long term paper subscriber you are not p... View
Tim Primmer - 2 hours ago
It was a ploy by the owner to shut it down.. Hope he has the money to pay out redundancy and long service leave.. View
News 2