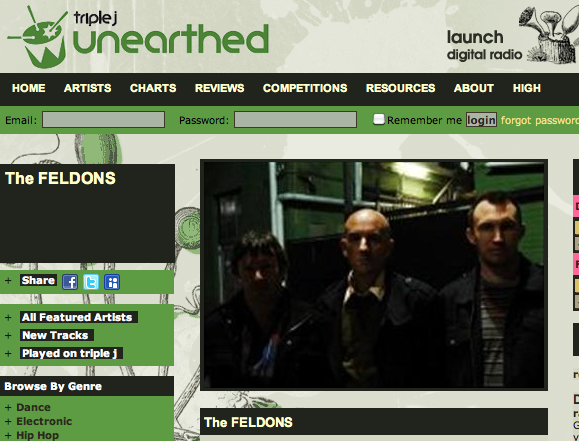 By popular request today we’re having a listen to The Feldons.

THE FELDONS sound as if they’d be much happier walking down Carnaby Street wearing paisley shirts or union jack waistcoats whilst being immersed in the spirit of the sexual and political revolutions of the sixties.

Alternatively they could have quite happily been seen sitting on a jetty on the Mississippi listening to old blues men with gravel voices sing about working in the thirties. Or lazing on a punt in Oxford, or hustling in dark dingy 70s pubs.

With a name derived directly from the 60s iconic pop TV program Get Smart, THE FELDONS have an interesting penchant for writing songs from any era, age or time. Melodic tunes interspersed with heavy blues and rock, soft country mixed with 1920s jazz and British influenced pop, it’s hard to pin a style upon these guys.

This is a band who feel like they are taking you on a musical journey through the late sixties and early seventies, courtesy of tight pop tunes and glorious psychedelic workouts and thought provoking lyrics. They are pure swinging sixties, eschewing all the values of classic English pop in it’s heyday with snappy drum loops, wrapped around sun-drenched chiming guitars, fuzzy melodic bass and catchy melodies and lyrics.

And yet a darker side also emerges in the deep blues rooted guitar licks of black America and frontier lives evoking images of slow rolling freight trains, dingy speakeasies, and the muddied waters of the deep south.

THE FELDONS are an outfit that seem to hark back to a time when love was free, flower power was king, flares and big collars were the order of the day, and people were generally a little more chilled out than today. All they need now is an army of screaming women and their image would be complete, because this is a band worth listening to, and screaming about.

Take the time and listen. You know it makes sense.

The Feldons are well known to us here in the Eagle’s Nest. They religiously send us their new CD’s and let us know about their youtube videos, which we appreciate enourmously and wish more bands would do the same.

They also played as the house band for RiotACT’s 10th birthday last year.

But I can’t help feeling they’ve let themselves down a bit with the songs they’ve chosen to be on their unearthed page.

Fermi’s Pile in particular is a better name for a song than the dirgelike offering that eventuates.

But Down on Love is a good representation of the band’s style.

At the end of the day they sound a lot like early beatles (as you might have guessed by their self-description).

They don’t push envelopes, they are unlikely to offend, the vocals are workmanlike.

So if you like that early Beatles sound then definitely check them out.

they are unlikely to offend

We were hoping for a one. We have outdone our expectations. It may be time to retire.

Seriously though, new album out in a few months.

t2owe - 2 hours ago
I really don't care about what they say about the Libs. Given the antics of the Barr government, just how much more damage co... View
t2owe - 2 hours ago
How about a change of government. It's way over due,. ACT government is consult in name only, and planning is off the wall.... View
Lifestyle 7

JS9 - 3 hours ago
"You also complain that Coe has promised to give away lots of revenue and spend plenty too, but with no evidence as to how he... View
George Watling - 5 hours ago
Yes lets have more $1.9 billion spends on Trams and bad urban infill stuffing up the city. View
HiddenDragon - 6 hours ago
"Labor, coming from the advantage of incumbency, says its promises are fully funded but with debt approaching $8 billion in f... View
ACT Election 98

Acton - 3 hours ago
You do not dispute the fact that Barr = high rates, but appear to have some conceptual difficulty with 'nothing else matters'... View
russianafroman - 5 hours ago
Maya123, All Labor has done for us is build chic apartments for the rich. The Liberals are looking out for the blue collar bl... View
JC - 6 hours ago
People should also be asking what Coe equals. Because it isn’t overly clear. We know they stand for everything that “anno... View
ACT Election 1