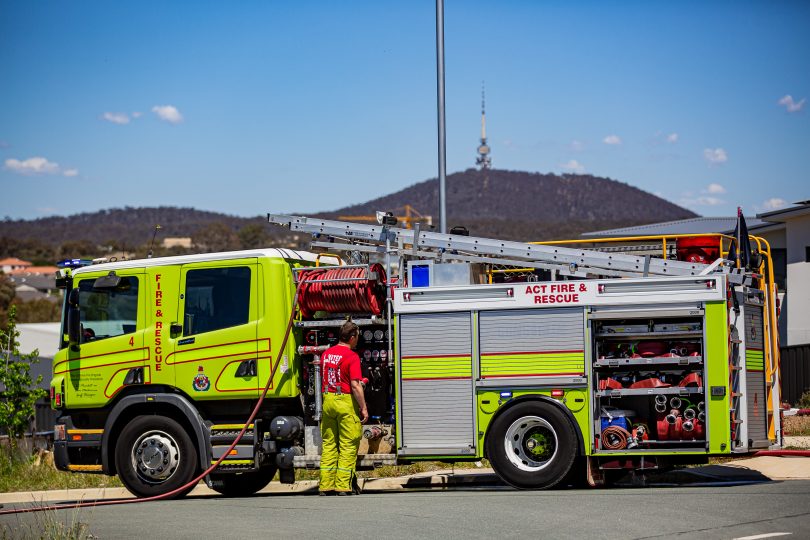 The firefighters union has called on the ACT Government to fund an extra 94 firefighters, two new fire stations and three more trucks in next year’s Budget.

In its 2020 Budget submission, the United Firefighters Union of Australia ACT Branch pitches nearly $48 million worth of proposals over three-and-a-half years, most of which relate to capital works ($43.5 million).

It says the 27 per cent boost to staff numbers would cost as little as $4.1 million over three-and-a-half years, allowing for a reduction in overtime and reduced salaries through staff turnover.

“It would improve the fire readiness of firefighters by dramatically reducing the incidence of recall to duty and, in turn, improve fatigue management,” the submission says.

The union wants new stations at Acton and Molonglo, at a cost of $18 million each, upgrades to the purpose-built firefighter training facilities at Hume ($7 million) and the Ainslie Fire Station ($530,000), including the building at both of designated transition areas to prevent the development of occupational cancers.

Of the proposed extra 94 firefighters, 24 would crew a pumper for Acton (City) fire station by the end of 2021; 12 would complement a possible 12 to be transferred through the Communications Centre Restructure to provide a crew of 24 for the aerial pumper to be delivered next year; 24 would crew a pumper for the Molonglo Fire Station, at the end of 2023; 24 would be relief staff to help reduce overtime and accrued leave balances; and 10 would support increased training, building inspections and improved logistical support.

If adopted, the union says the measures would expand the training capability and capacity of the service, improve the overall health and wellbeing of firefighters and enhance the quality of emergency response available to the ACT.

The proposals would represent a highly effective use of the Fire and Emergency Services levy and provide for an increasingly modernised fire service to protect a growing ACT, it says.

The 2019 Budget allocated nearly $1 million to scope sites for the new stations, with land on the corner of Clunies Ross Street and Parkes Way identified as the site of the proposed City station

It also funded 36 firefighters due to be trained in 2020, although this will only bring ACT Fire & Rescue back up to where it should be. The service has acknowledged that more recruitment drives will be necessary to staff the new stations.

A new urban pumper with a 25-metre ladder and rescue platform, and a new 44-metre aerial platform to replace the ageing ‘Bronto’ are due to be delivered by the end of the financial year, at a cost of $4.2 million.

Joel Quinn you should join

Til Bijou make this happen

Blake Dwyer-Shoard join with him blake

I want a pony

Ron Swanson you're more a unicorn type of guy

Ron Swanson can it pull a water cart?

Now is the time. ACT and NSW face a horror summer fire season with no water to draw on. Ex fire chiefs have said it looks like being the worst since 1994 when Sydney national parks all went up together.

kenbehrens - 5 minutes ago
Lower check-in numbers have nothing to do with people not going out due to Omicron. Everyday, I see people (mostly under 40's... View
News 231

Oiledpengu - 27 minutes ago
Cos poor people shouldn’t be responsible for their actions View
Jimbo Lambert - 1 hour ago
Justo Justo some people have driven that stretch of road for 30 or 40 years at 60km/h. If they suddenly reduce the limit it i... View
Dean Soccol - 3 hours ago
Nathan Grieve in Queensland every time we get a fine we lose points. So if you are one of those that don’t care about the m... View
Community 2

Ann Gugler - 29 minutes ago
I met Alan many years ago and hopefully I have copies of all his books, but I will keep an eye out for others just in case I... View
Opinion 7