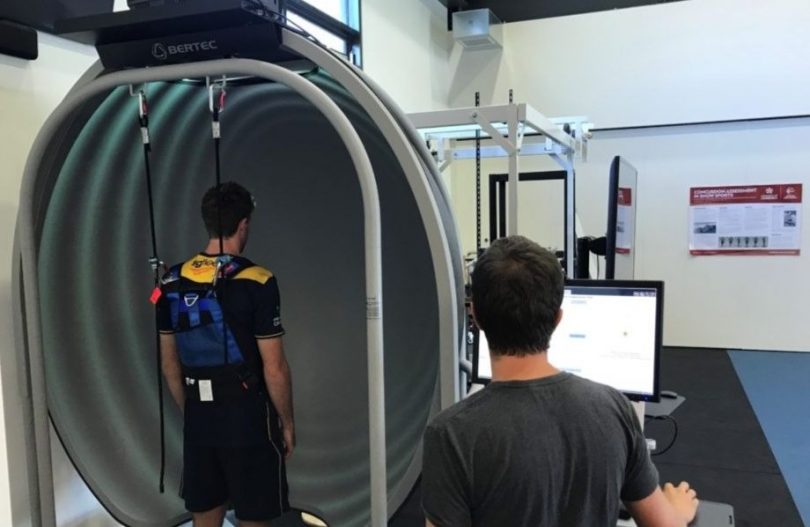 Canberra athletes suffering from concussion may fast-track their recovery and return to action sooner than previously possible thanks to new balance technology at the University of Canberra.

Researchers at the university’s Research Institute for Sport and Exercise (UCRISE) will use an Australian-first balance assessment device to comprehensively evaluate athletes with suspected concussion.

The tools focus on concussion patients being able to maintain their balance and control their movement. It will allow researchers and medical staff to identify changes in an athlete’s brain and diagnose complications.

It could have a major benefit for Canberra’s top athletes and sports teams, including Brumbies, Raiders and Canberra Capitals stars who will be able to utilise the technology.

UCRISE Director and Professor of Sports Medicine Gordon Waddington, said the technology was a new tool in the management of concussion, especially in contact sports.

“This device, in combination with the technology we’ve already developed, heralds the most comprehensive approach yet to treating athletes who may have suffered a concussion,” he said.

“It’s a game changer for our local sports teams which are having to incorporate stricter measures around head injuries.”

“This technology will help athletes get the right treatment and hopefully, have them returning to action sooner.”

Professor Waddington, who also conducts research for the AIS, said it would only strengthen the university’s connection to Canberra’s highest-profile sports teams.

“UCRISE already works closely with the ACT’s biggest clubs, but this will further enhance the relationship,” he said.

“The addition of yet another world-class device to our offering also solidifies the Institute’s reputation as one of the southern hemisphere’s leading sports science laboratories.”

While the technology will be primarily used on athletes with suspected concussion, it will also advance the Institute’s work with NASA to ensure astronauts are able to walk on the surface of Mars in the not-too-distant future.

Do you think the new technology is a welcome change to help protect players with concussion? Let us know what you think below.

Geoff N Narelle - 26 minutes ago
I think that the author of the article has romanticised the story somewhat. It was probably a 20 minute bike ride each way on... View
Food & Wine 3

Ivana Ryan - 1 hour ago
Toasted sandwich and a coffee 😋 Bojana Simic View
Christopher Rompotis - 2 hours ago
Hannah next brunch catch up? 🤔 View
Nicolas Normandeau - 10 hours ago
Matilda Jones I need this in my life. This sounds so good!... View
News 21

@The_RiotACT @The_RiotACT
Opposition Leader Elizabeth Lee will introduce an amendment to the ACT Crimes Act today to make it an offence to 'stealth', the act of removing a condom during sex without consent https://t.co/jFSIrItv88 (31 minutes ago)