We all owe you a debt, Mary Porter AM MLA 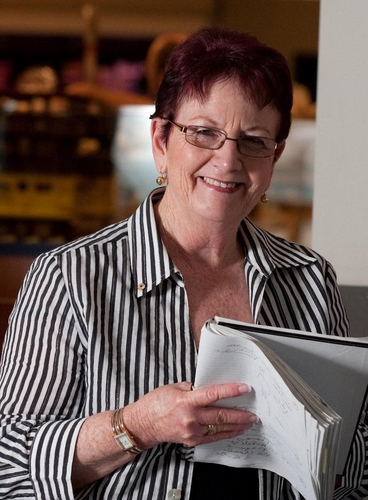 Mary Porter AM, MLA. Where do I start? Here is a woman who has devoted her entire adult life to community service in real time. I’ve met and served with many pollies who have professed to be servants of the people but when you scratch the surface, you find that community service was a means to an end rather than the end in itself.

I count Mary Porter as one of the real few friends I had in my political life. In that game, it is usually a bear pit with undermining, false friendships and fair weather friendships between people who have the common interest of self-grandiosity. People coalesce as mutual admiration societies as long as success surrounds them. When success disappears or rivalries emerge, exit friendship in the true sense. Loyalty is a cheap and transitory commodity.

When Mary Porter gave you her friendship, it was like receiving a little part of her. I went through the dark days of the soul a number of times in my political career and having Mary there was more support than I can describe.

I knew Mary vaguely as a staffer for Ros Kelly when I was only new to the Labor Party and a big Ros Kelly fan. She was doing constituent support work. She was the person behind the Member. She was the person to whom people came for help, in Ros’s name. Annette Ellis worked in the same work for Ros and they had the same approach. That of service.

Mary was the driver, in my mind, behind the Tuggeranong Community Service, which later became part of the Communities at Work empire. Again, Mary has engaged in an organisation looking after people in distress or people wanting support services.

I guess this is the sort of work people drift into when they move from nursing. The need to provide succour is in their DNA. It certainly is in Mary’s DNA.

We came together politically a couple of times at annual conferences and such but didn’t really connect until the 2004 election for the Legislative Assembly and Mary was giving it a tilt. It soon became obvious that Mary, a late starter in the art/science of politics was going to be a permanent feature in the Assembly.

Her commitment to her “people of Belco” set the high jump bar up a further couple of notches. I thought that my own priority of service to Tuggers, over ministerial work at times, was pretty good until along came Mary and reset the standard. Her mobile offices became the stuff of legend.

Many in the community, out there in voter land, don’t know how hard MLAs work (if they have a mind to, given that not all of them actually do!). Over the years, Mary juggled being a committee chair, a member of committees, Deputy Speaker, advocate or sensitive issues which for her were defining ones like euthanasia, and her work for the “people of Belco”. But the mobile offices was the ants’ pants for Mary. She revelled in it. It was just a natural part of her life.

When I think back of about the chats we had when we had backbench desks together, I remind myself that she didn’t use the organisations or the Assembly for her personal ends. Rather, it was the other way round. The organisations she worked with and for, exploited her need to serve and the clients were the better for it.

She is a salutary lesson to aspiring pollies. I have often said that being part of community organisations won’t get people elected but the absence of community service will stop someone from being elected. I have neglected to advise that if people use community organisations for a political end their success will be transitory. This is because the raison d’etre for that service is a notion of self instead of service. Mary Porter is the epitome of the DNA driven need to serve.

Aspiring pollies should examine themselves and see if they can measure up to the standards set by Mary Porter. And if they can’t, back to the drawing board for them. Glitz and glamour are not pre-requisites for service. Real time commitment, coupled with real time experience and a graduate diploma from the University of Hard Knocks are the real qualifications needed.

As with many in the game of representation, the amount of time, the intensity of effort, and the often isolated position this work delivers, can be telling on one’s health. The physical bit is something which just turns up and you have to deal with it. And sometimes in the end, it is this which takes the athlete out of the game. Such is the case with my friend Mary.

But, and this is a really important thing to note, Baby Pollies, the black dog lurks. The amount of psychological pressure which comes with the territory is huge and the way to avoid succumbing to the dog or just to the darkness of self-doubt, is to have a partner who will share your innermost fears and lack of self-confidence. Mary has Ian. Ian is the non-paid partner, he is part of the job lot we get when we elect someone like Mary. How good is that? What a team they make!

I was lucky in the same way and I have hopes for some of our aspiring candidates from both sides.

Mary has turned the page on another chapter of her life. We all owe her a huge debt. I certainly do because she kept me intact on more occasions than she knows. How many of us can say of a colleague that it was a pleasure and a privilege to have served with them? I do say that about Mary Porter, my friend and my colleague.

2 Responses to We all owe you a debt, Mary Porter AM MLA
Filter
Showing only Website comments

I thought so too and was surprised/concerned. Mary Porter is now the Judi Dench of Canberra.

Am I the only one who read this headline and thought Mary Porter had passed away?

Eddie Majcic - 4 minutes ago
The market until CoVID was mostly fuelled by investors. That's driving up demand. Also migration which has all but stopped. S... View
Karen Feng - 1 hour ago
Heather Purvis i should have worded it this way. "owning a home is not a sign of financial Success. you could have millions o... View
Heather Purvis - 1 hour ago
Jesse Mahoney no its actually the sentence structure that i mentioned that i couldnt understand - i suspect that there are wo... View
Property 46

Hen Gissane - 2 hours ago
Good on them. 5 cents an hour is an absolute disgrace and insult to people who have been on the frontline through COVID. Soli... View
Jenna Hopkinson - 3 hours ago
5c are you kidding me??? Hospitals do not function without these staff... Take care of them!!! View
Carol Comerford - 5 hours ago
This is disgraceful!!! View
News 102

Dorsia Darling - 2 hours ago
I wish the cameras would also fine people who drive way under the speed limit & brake constantly for no reason coz they can't... View
News 87

Dolla Bill - 5 hours ago
Tom rubbish together, recycle together, wheelies boys for life View
Ashley Wright - 6 hours ago
Peter Mcleod it is a dispute between a private company and its workers. Nothing to do with Andrew. View
Stephen Finnegan - 8 hours ago
Fletcher Beverley Good for them. When's the last time paramedics went on strike?... View
Food & Wine 22

Toni Isaacson - 12 hours ago
Nothing harmless about Hallowe'en View
Jennifer Buerckner - 13 hours ago
the kid's in my suburb don't even try to dress up. they just won't fee stuff and knock on your door 4 or 5 times View
News 36

Julie Macklin - 15 hours ago
Fortunately the long grass looks prettily scenic, until they do get to mow it. View
show more show less
*Results are based on activity within last 7 days

Leadfoot drivers beware - the ACT's speed detection net is about to be widened with the addition of two new...
News 87

Household waste and recycling collections will be disrupted on Monday (2 November) due to industrial action by drivers employed by...
Property 46

The ACT Greens have been on cloud nine for the past week but now it's time to come down to...
Opinion 26

The dream of homeownership is one that is written about often. There's an obvious reason for housing security through ownership being...
Sport 27

@The_RiotACT @The_RiotACT
Halloween's now an annual ritual for a haunted house in Harrison that's become the nightmare on Flemington Rd. How do you celebrate Halloween? https://t.co/Q35Ecfo2Tl (41 minutes ago)

@The_RiotACT @The_RiotACT
Thunderstorms - and possibly severe super-cells - are forecast across the ACT today, while more than 60 mm of rain is expected tomorrow https://t.co/AT4hJfgCHy (1 hour ago)

@The_RiotACT @The_RiotACT
Googong Dam will supply all water to residents of Canberra and Queanbeyan during November in an effort to keep the dam from spilling https://t.co/7hZZebGxVj (3 hours ago)